Known throughout Ireland for its mellow pace of life, a vibrant nightlife, and relaxed creativity, Galway is a colourful corner, and its art isn’t hard to track down. From the city galleries and collectives (check out 126 and Galway Arts Centre) to the graffiti occupying every wall in the docks area of the city, expect plenty to catch your eye. Many are inspired by the county’s rugged Atlantic coast, others by its quaint streets and traditional worldview. Here are 10 of the best artists currently plying their trade in the Connacht capital.

The man behind much of Galway’s most striking street art, Finbar McHugh (Finbar247) deals in stark wall pieces and colourful canvases, bringing splashes of colour to prominent parts of the city. This work isn’t quite graffiti – it’s too subtle and textured, and McHugh works very much with the support of the local community – but it’s brash and bold enough to bring a brightness that’s needed in a damp, Atlantic climate. His latest project involved two weeks of adding charming details to the walls of a local school.

Vanda Luddy has a gallery and shop on Abbeygate Street, Galway, and it’s clear from the moment you walk in that the city provides much of her inspiration. From gorgeous canvases of the traditional boat called the Galway hooker (see below) to detailed paintings of the Spanish Arch and Shop Street, her Galway is a bright, glistening place that looks very much like its always a summer day. She came to art relatively late in life but makes up for it with her gorgeous colour palette and shading. 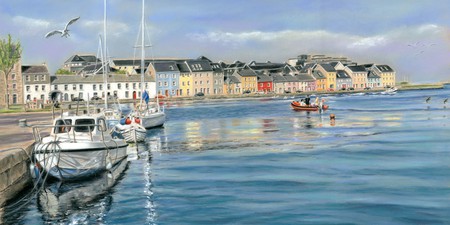 A sculpture artist and painter who also runs an art school, Rosemary Fallon is the resident artist at Galway Bay Galleries and will take you in for a few classes at ‘Rosemary’s Art School’, if you’re so inclined. Inspired by travel, surrealism and pop culture, her bold, beautiful portraits of women – in part a commentary on modern beauty standards – are particularly memorable.

An internationally acclaimed sculpture artist from Dublin, but living and working in Galway, John Behan has public works in cities around the world, including once having his artwork gifted by the Irish government to the United Nations. He stars in a 1999 documentary about his work entitled Famine Ship and is best known for his ‘Bulls’ sculptures. Art lovers can also see his dramatic work in most corners of Ireland.

Magnificent bronze sculpture by our dear family friend John Behan RHA at #Rathmullan based on the Flight of the Earls – we're biased but love every bit of this piece of work, particularly the Earls' coats.

Connor Robertson is on the board of directors of the artist-led gallery 126, a growing Galway art scene staple, and has a fuzzy, abstract style that focuses largely on people and the spaces around them. Robertson’s chunky paintings long examined his own wanderlust, focusing on his time spent exploring Aboriginal culture in Australia. Based back in his Galway home, a more local flavour is creeping back into his work. 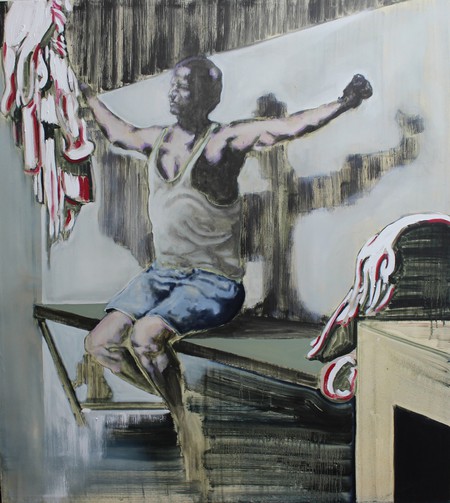 A New York painter relocated to Galway, Tiffani Love is currently ‘guerilla painting’ her way around the county’s rugged shores, paintbox in hand. Heavily focused on landscapes (so she’s in the right place), Love’s dappled, fine-art images are full of nuanced texture and capture the mood of her scenes – think cliffs, seas, beaches, and forests delivered in beautifully layered technicolour. 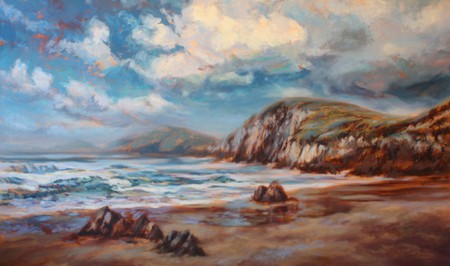 Over The Fields, oil on canvas | © Tiffani Love

Heavily involved in creating artwork for Ireland’s music festival scene (which means big, quirky, colourful sculpture pieces), Seamus Scullion also works in art therapy and has a passion for bringing art to public spaces. He describes Galway as ‘a hive of creativity’, and he has used his art to provoke public discussions of human trafficking on the city streets. ‘We want to create something future generations can utilize, where they can go and be part of a diverse culture,’ he explains.

Another man making his mark directly onto the colourful streets of Galway city, Shane O’Malley coats walls around the West of Ireland with his own brand of vivid, abstract and angular work. With titles such as Self and Mind Games, O’Malley speaks of expressing himself in primary colours, as he explores identity, mental health and the human condition. He’s currently working on a project called ‘A Thousand Happy Faces’, focused on positivity.

A makeup artist with a penchant for turning her talents to canvas too, Grainne Coughlan is developing a set of stunningly detailed images of horses in recent months. While she has yet to really break onto the professional end of the arts scene, her work is nonetheless absolutely beautiful, with the added bonus that you can book the Oranmore-based artist to use her skills on a face of your choice too!

An abstract landscape artist from Dublin, but working in the wilds of Connemara in West Galway, Leah Beggs bases her work on ‘fleeting glances of the landscape, finding the energy and power of nature a strong stimulus’. Connemara – with its rugged hillsides, traditional lifestyle and seasonal colours – shines through in the imagery, with Beggs saying you can even see the West’s bogs in her paintings’ layering. 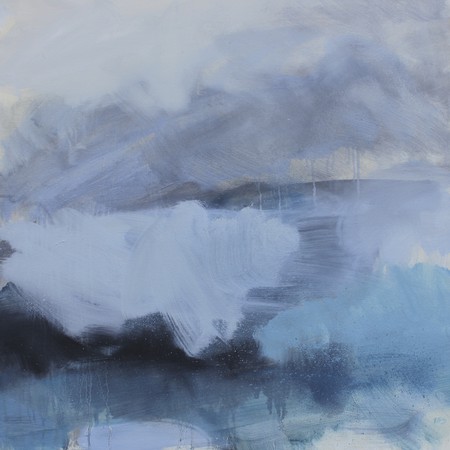 The Sea Between | © Leah Beggs
Give us feedback