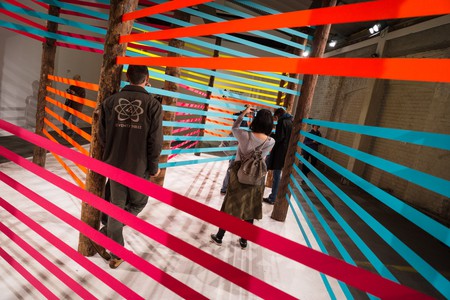 Much of the best of Ireland‘s art scene plays out of the streets. As the home to the country’s main art college, Dublin Institute of Technology (DIT), and with a surprising penchant for high-quality graffiti (though you’ll have to get out of the historic heartlands, for which locals largely have too much respect to ink), you’ll have no trouble finding a surprisingly vibrant scene.

The presence of the fantastic IMMA (Irish Museum of Modern Art) offers a natural hub that’s a must-visit for art aficionados, too. Here are 10 of our favourite modern artists to check out on any trip to Dublin.

A charming combination of ancient and modern, Pat Byrne’s most popular works (which you can pick up in the wonderful Jam Art Factory) are the pages of beautiful old antique books, painted delicately over with imagery that’ll take many viewers back to their childhoods. They’re reminiscent of modern-day Alice Through the Looking-Glass, taking in colourful animals, or depicting the city itself. Byrne’s work is a gorgeous fusion of old and new, nostalgic and pop-culture-inspired, all at the same time.

A breakthrough artist best known for an iconic and controversial image at the heart of the modern-day campaign to repeal the 8th Amendment (the Irish prohibition on abortion), Maser is a rising star of Irish modern art and design. An abstract graffiti artist of Dublin origin, Maser became highly respected on the local scene before relocating to the USA. He’s recently worked with U2 on imagery for their Songs of Innocence album, and is fixated on typography and abstract iconography. 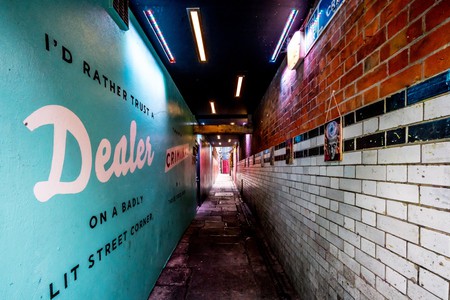 Regularly exhibiting in Dublin and around the world, capital-born Caroline McCarthy sculpts with everyday objects ranging from toilet paper to plastic bags via waste packaging, producing colourful and lifelike results. Her work is complex and bizarre, and examples can be seen in IMMA (paper-based vegetables) and the Little Museum of Dublin (gold-coated Monsters Munch, a local snack brand).

Another popular graffiti artist based in the city, FiNK (not to be confused with the musician of the same name) is into stenciling, statement graffiti pieces, photography and graphic design. Like many other local artists, the area around Francis Street (in the old-school Liberties district of the city) is something of a playground for him. You can check out countless works in the carpark of the Tivoli Theatre, while one of FiNK’s best – pictured below – is a pacifist, Star Wars–themed piece on the wall of a derelict pub nearby. 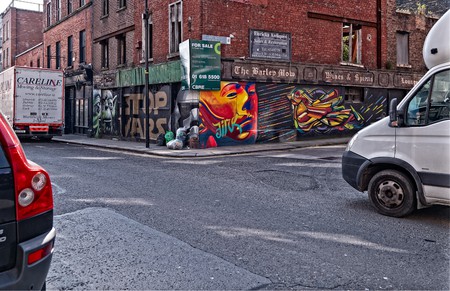 Another local artist whose gorgeous work you can take home with you (we refer you once again to local champion Jam Art Factory), Jacob Stack creates simple, charming and iconic images that can depict anything from cartoony Dublin buildings to surrealist dinosaurs. Stack’s work remains surprisingly affordable, and he’s pleasingly eclectic in what he produces.

An iconic Dublin sculptor, Patrick O’Reilly is perhaps best known for his chunky, slightly creepy-looking Three Bears sculpture, which once sat alongside Ireland’s largest indoor concert arena, the 3Arena. The bears are sadly moved on and awaiting sale now, but you can see O’Reilly’s work in a number of other spots around the country. Much of his work is produced in his Dublin studio, with (smaller) stark bronze bears and a role in the iconic Halloween Macnas parade amongst his core achievements, alongside regular international exhibitions. 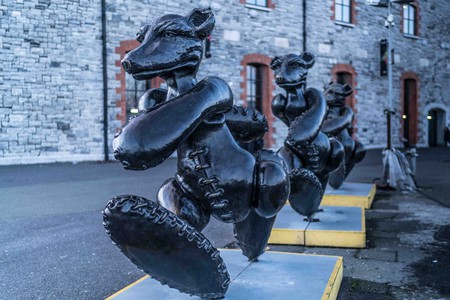 Another fantastic example of those street artists so prevalent in the city, Solus produces stark, bold images that adorn the city walls, and has worked up to sell out exhibitions around the world. Having only burst onto the scene with his first exhibition in Dublin’s Temple Bar district in 2011, his images revolve around the theme of conquering inner demons, with symbolic boxing gloves prevalent in his art. He also boldly tackles Irish social issues.

From Dublin but now living in Derry, Donal Mangan is a man openly inspired by the capital’s architecture in his work, which takes in stark, simple but sublime illustrations of Dublin’s famous and not-so-famous buildings. From pubs to an entire streetscape, via a glance at the ‘known to locals’ icons like Poolbeg lighthouse, Mangan also worked on Oscar-nominated Irish movie Song of the Sea.

Sold as ‘not your usual image of Dublin’, Shane O’Connor (a.k.a Sketchy Inc) fuses the landscape of the Irish capital with surrealist colours and symbolic imagery. His pictures include iconic buildings like the Guinness Storehouse, the Cobblestone Pub in Smithfield and traditional Irish markets, but also symbolic infusions, like Poolbeg towers emerging from a pair of lungs, or a stark black and white heart.

Forgive us this very clichéd closer, as it’s nothing as ridiculous as it might first appear. Guinness have long championed Irish artists, from the legendary John Gilroy (who produced much of the imagery from the 1930s to the 1960s, and is currently being celebrated on limited edition white cans containing his work) to Irish hero Walter Crane. That makes their latest always worth checking out, and has made the advertising section of the popular Guinness Storehouse a surprisingly important and memorable part of the attraction. Their television advertising is a bit special, too. Check out one of the iconic swimmer adverts, highlighting the slow pour, below.