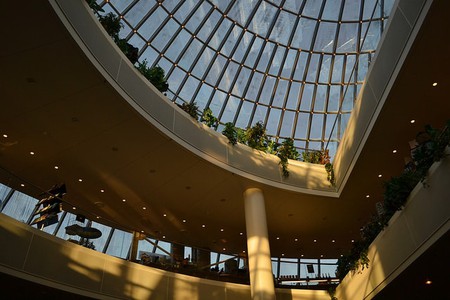 The small northernmost capital of Europe, Reykjavik, Iceland, has a little bit of everything. While still maintaining a charming, small-town feeling, it also has all the trappings of a larger city – from outdoor sculptures to breathtaking mountain views, art museums, and settlement exhibitions. But one other landmark stands out in the city, and it’s a glass-domed restaurant.

Perlan is one of the main landmarks in Reykjavik. Perlan, or The Pearl, stands at 25.7 metres high and was originally designed by Ingimundur Sveinsson.

Situated on the top of the forested hill, Öskjuhlíð, just outside the city centre and overlooking the ocean, the building had been hot water storage tanks for decades. In 1991, however, the tanks were reconstructed and given a dome-shaped structure placed on top. Now it is a multi-function building containing a Viking museum, restaurant, coffee shop, and other shops. There is a viewing deck on the fifth floor, which offers panoramic telescopes at each of its six corners.

Út í bláinn is the unique restaurant situated under Perlan’s glass dome, an enchanting place to eat during day and night, and equally in any type of weather as the sky is literally just over your head. The bistro-style restaurant emphasises simple, seasonal dishes, with an extensive wine menu and a great brunch offering. The restaurant is only one of many ways to enjoy this multi-functional building. 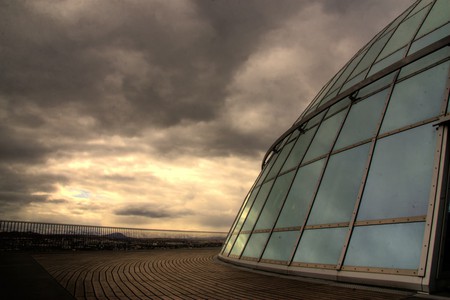 The exhibition, Perlan Museum – Wonders of Iceland, opened in 2017. It’s a unique exhibition that, through pioneering technology combined with photography and design, allows visitors to see, feel and experience the tactile nature of volcanoes, glaciers, the ocean, and wildlife, to name a few.

Also featured in the exhibition is a real ice cave that’s 100 metres long and made from real ice and ash. There’s also a virtual aquarium, which is a replica of Látrabjarg Cliff, a popular bird-watching site in Iceland. A timeline of Iceland’s geologic history can also be found here. The exhibition is a great option if you are unable to make it out of Reykjavik to visit these natural phenomena in real life during your stay.