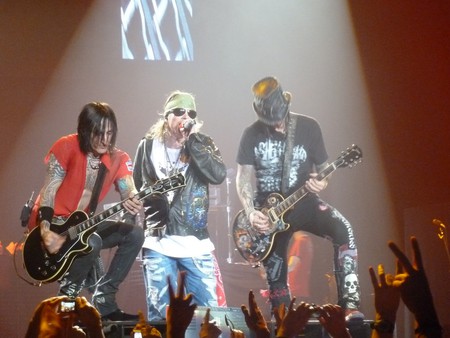 If you’ve always wanted to visit Iceland and you’re a Guns N’ Roses fan, then this is the summer to visit as the rock legends will perform in Iceland for the first time.

Guns N’ Roses was founded in Los Angeles in 1985 and is one of the most famous rock groups in musical history, selling over 100 million records. Although the band has notoriously experienced personal conflicts between lead singer Axl Rose and guitarist Slash, both will be performing with the band in Iceland.

According to concert organizers, it will be one of the largest concerts the country has ever held. According to the National Broadcasting Station, the concert, which is scheduled for 24th July, will be held at Iceland’s largest football stadium, Laugardalsvöllur.

The National Broadcasting Service also reported that numerous renovations will have to be made to Laugardalsvöllur to prepare for the band’s equipment as well as for the large volume of spectators. A special floor will be constructed to protect the grass where spectators will stand and a 65-meter wide stage will also be constructed, featuring large flat screens on either side. The band will be accompanied by 150 staff and 35 containers of equipment. It is being arranged by the same organizers of the Secret Solstice festival that takes place in Reykjavik during the summer solstice.

If you’re interested in the local rock music scene in Iceland, a good place to start with some basic history is at The Icelandic Museum of Rock ‘n’ Roll, which opened in 2014 in Keflavik, close to the international airport. The museum covers the story of rock and pop music in Iceland starting from 1930 all the way to the present with the help of a plethora of texts, photographs, and films.

Guests at the museum are given a tablet computer with headphones when entering the premises, which features a guided tour with details on the stories and historical context behind each of the artists mentioned. The museum also has its own sound lab where guests can try out an electric drum kit, guitar and bass guitars for themselves.