Volcanic Shores: A Guide to the Black-Sand Beaches of Iceland 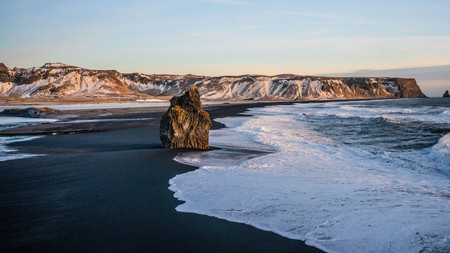 For dramatic leaden skies and crashing waves that wouldn’t look out of place in Game of Thrones, set your compass for the black-sand beaches of Iceland. Which ones to visit? Here are our recommendations, including the ethereal Reynisfjara.

The stark beauty of the Icelandic coastline is not for your regular beachgoer. You won’t find soft white sand or pretty parasols. Instead, expect towering basalt sea stacks, craggy cliffs and frigid waters on the black-sand beaches of Iceland. The 130 volcanoes on the island – both active and inactive – lie behind this unusual natural phenomenon. As molten lava hits the sea, it reacts violently in a paroxysm of steam, breaking the lava into sand and creating a fantastical, graphic landscape. These are the best black-sand beaches to visit in Iceland.

The best time to visit

Unpredictability is the buzzword for the weather in Iceland, so whichever time of year you go, be prepared. High season is summer (June to August), with up to 20 hours of daylight. This is the most popular time to visit, with festivals and events aplenty, so do book in advance. Midseason (May and September) is cheaper but colder, and you can expect some snow. Low season (October to April) gets down to five hours of daylight in January, with some roads likely to be closed due to adverse weather. But on the (slightly dark) bright side, this is the best time of year to see the Northern Lights. 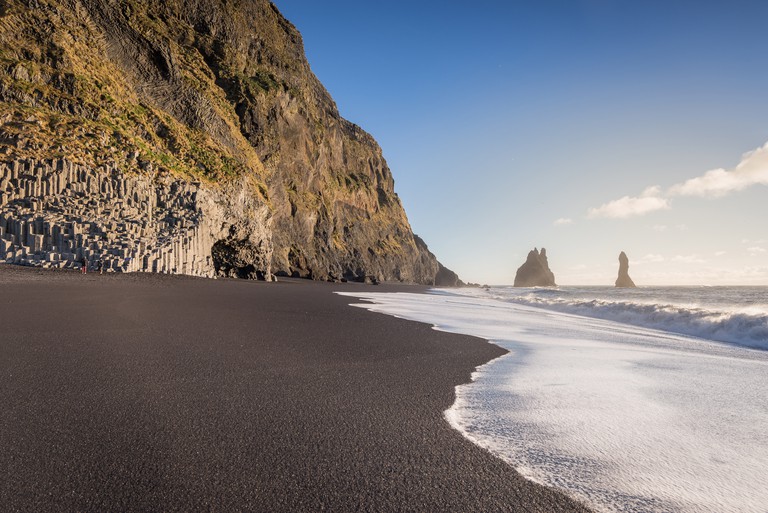 Spectacular basalt stacks stand resolutely against the ferocity of the sea close to the most famous black beach in Iceland, Reynisflara. Nordic folklore suggests these large stacks are petrified trolls who were caught out by the sun while trying to steal ships from the ocean, and turned to stone. It’s a popular tourist spot, but the waves here are deadly, snatching unsuspecting visitors off the beach with alarming regularity, so please act responsibly if you choose to visit this mysterious place.

How to get there: By car, drive southeast along the Route 1 Ring Road 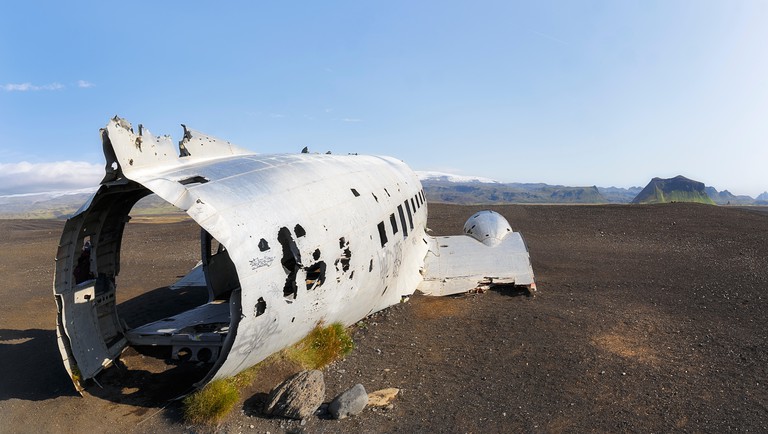 For an epic, apocalyptic tableau, you can’t get much better than the abandoned navy DC-3 aeroplane that crash-landed on this remote stretch of black beach in 1973. Remarkably, everyone on board lived to tell the tale – and you can too, if you’re prepared to walk an hour from the road to reach these ghostly remains. No cars are allowed on the beach, because of the risk of erosion and damage to the vegetation, but once you’re there, you can climb inside to shelter from the frigid Icelandic weather.

How to get there: By car, drive southeast along Route 1 Ring Road 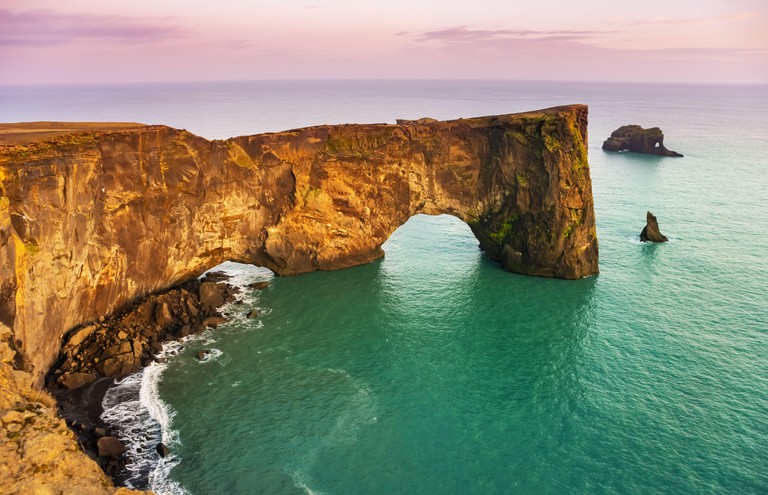 Literally “hill island with a door hole”, Dyrholaey is Iceland’s answer to Durdle Door in Dorset, but rather more bleak, complete with volcanic black sand. Driving up to the top of the hill offers you fine views over the arch and the lighthouse opposite. You can easily see the black stacks of Reynisdrangar to the east. The area is renowned for having abundant wildlife – look out for eider ducks all year round, and the pretty Atlantic puffin from May to September. But beware of aggressive Arctic terns in the spring and summer nesting season, as they will dive-bomb you if you get in their way.

How to get there: By car, drive southeast along Route 1 Ring Road and onto Road 218 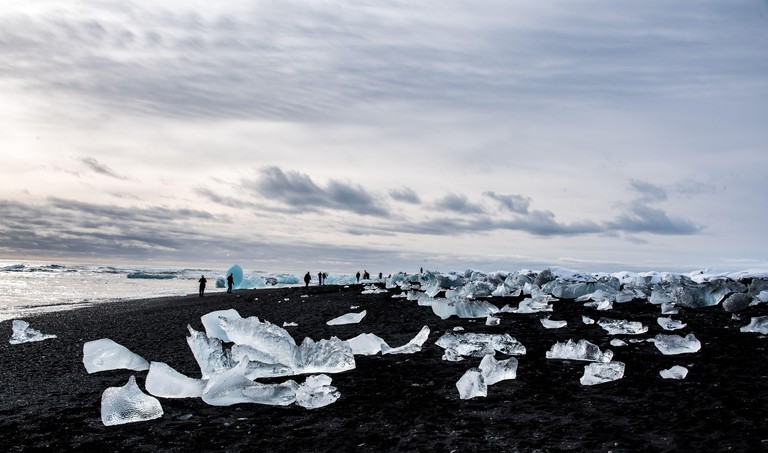 The diamonds on this shoreline are certainly not forever. These particular sparkling rocks are made from ice, cut adrift from the Jökulsárlón glacial lagoon, buffed by the sea and washed up on the jet-black beach to create a monochrome masterpiece. Nature lovers come here to watch the seals do their thing, and it’s the best place in the country to spot orcas from the shore.

How to get there: By car, drive southeast along Route 1 Ring Road 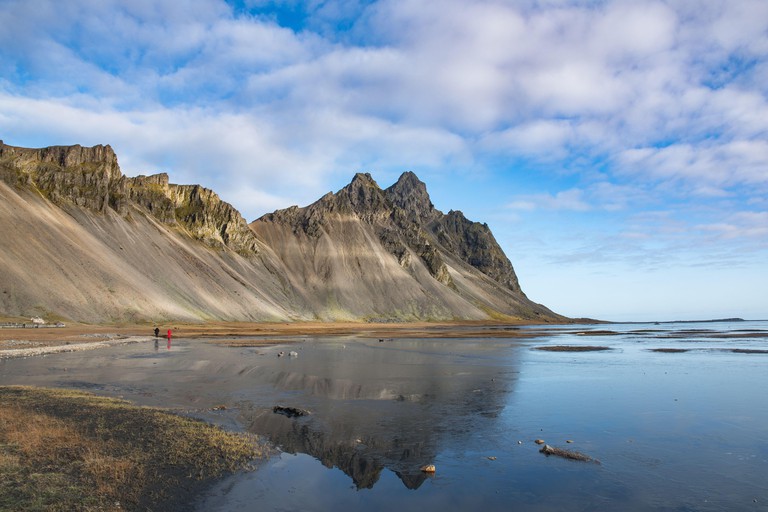 The Vestrahorn, or Batman Mountain, rises out of the black expanse of sand of the Stokksnes peninsula. The 450m (1,476ft) peaks stand jagged against an ever-changing Icelandic sky, providing a magnificent backdrop to the wave-patterned beach and dunes. Visit the Viking Cafe for hot drinks and waffles during your stay, and don’t miss the cute Viking village created as a film set for director Baltasar Kormákur’s 2018 film Vikingr. It’s a private beach, so expect to pay a small fee.

How to get there: By car, drive south east along Route 1 Ring Road