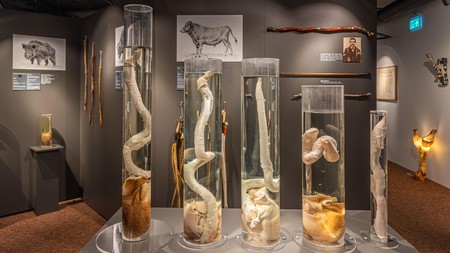 Imagine being surrounded by over 200 penises seven days a week. Well, that’s what life is if you work at Iceland’s penis museum!

The Icelandic Phallological Museum in Reykjavik, lovingly known as The Penis Museum, is probably the world’s only institution dedicated to accumulating a collection of phallic specimens belonging to each mammal that resides in the country.

Founded by Sigurður Hjartarson in 1997, the foundation for the institution was laid much earlier, in 1974. Hjartarson, who was working as a school headmaster at the time, was gifted a whale penis as a joke by some of his teachers. This became a frequent occurrence and, soon enough, different mammal’s members were being added to the collection.

There is also penis paraphernalia on display, including scrotum lamps and a bowtie made from whale foreskin.

In a recent video, travel vlogger Joe Hanson interviewed the museum’s assistant curator, Þóröur (pronounced Thor-thur), who explains that the job can be quite awkward at times! ‘We get a lot of giggles,’ he admits.

Jokes aside, the penile parts on view are very impressive! There is even a 6-foot partial sperm-whale schlong (we repeat, that’s only part of it) and a hamster wiener so tiny it’s displayed under a magnifying glass. And did we mention the human penis donated by a 96-year-old male who was a friend of the founder and claimed to have bedded over 300 women?

It really seems like this museum has it all, and, truthfully, collecting this many pickles can’t have been an easy feat. Call us nuts, but it sounds like a long, hard process…

That said, somebody’s got to do it!