This Icelandic Cave Has a Secret Underground Pool

Game of Thrones has popularised numerous locations, including Dubrovnik’s old town and Aït Benhaddou in Morocco. Another destination that’s been thrust into popular culture is Iceland – specifically a small lava cave called Grjótagjá in the northern part of the country.

From up above, Grjótagjá Cave is one big mystery. The cave, which fits about 300 people in at any given time, was popularised in one of the most iconic seasons in the third season of Game of Thrones – and it’s since piqued the interest of people around the globe.

The only hint to what lurks beneath is steam which rises through its fissure. This, you soon realise, is the result of thermal water that’s naturally around 45 to 50 degrees, and once said to have reached 60 degrees in the 1970s as a result of the eruption of Krafla Caldera. 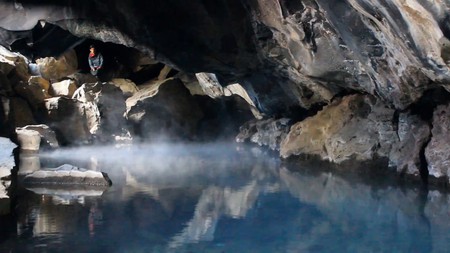 Grjótagjá Cave is near lake Mývatn

And although the temperature has since cooled, it’s known for its unpredictable sudden rise in heat due to there being liquid rock around a mile under the surface. This obviously means swimming is off the cards – though you can dip your toes into the pool from the edge. However, this wasn’t always the case. Back in the 18th century, it’s said that someone by the name Jón Markússon used to live in this caves; it made for a great place for outlaws to lay low in.

Elsewhere, another naturally heated geothermal pool called Stóragjá sits next to the village of Reykjahlið. A lesser-known alternative, it sees fewer tourists, but it’s also not safe for swimming due to its unhealthy levels of bacteria from previous bathers.

Needless to say, they’re still worth the trip to see Mother Nature at its best.