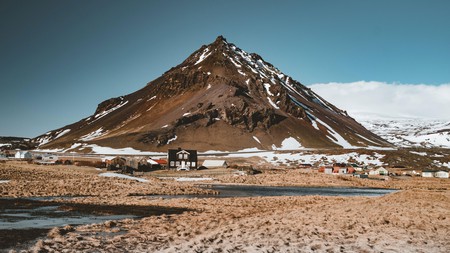 Jutting 90km (55mi) into the North Atlantic Ocean – like a giant finger pointing towards Greenland – the Snæfellsnes Peninsula on Iceland’s west coast is a microcosm of the country’s most spectacular landscapes. From vast lava fields to glacier-capped volcanoes and black sand beaches, there’s awe-inspiring scenery virtually everywhere you look. Just a two-hour drive from Reykjavík, the Snæfellsnes Peninsula can be reached by following the Ring Road (Route 1) to Borgarnes and splitting off onto Route 54. Although it’s possible to cover the entire peninsula in just two or three hours, you’ll want at least a day or two to make the most of everything it has to offer. 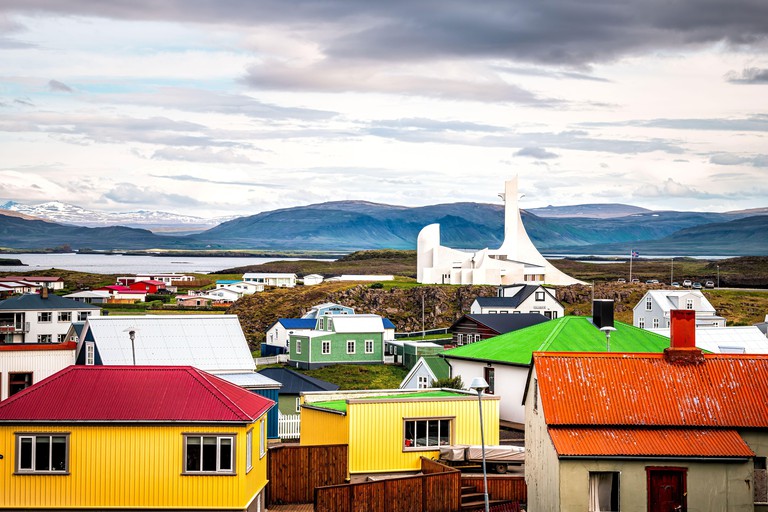 © Andriy Blokhin / Alamy
As the main town on the Snæfellsnes Peninsula, Stykkishólmur – on the northern coast – is an ideal base for exploring the area. The harbour, futuristic white church and brightly coloured timber houses – against a mountainous backdrop – make for an idyllic view. This is best enjoyed by climbing up Súgandisey, a small basalt outcrop with a red lighthouse on top, connected to the town by a man made breakwater. As well as a surprisingly extensive choice of accommodation, Stykkishólmur has a couple of excellent restaurants – Sjávarpakkhúsið and Narfeyrarstofa – offering fresh fish caught in Breiðafjörður, plus other locally sourced dishes. 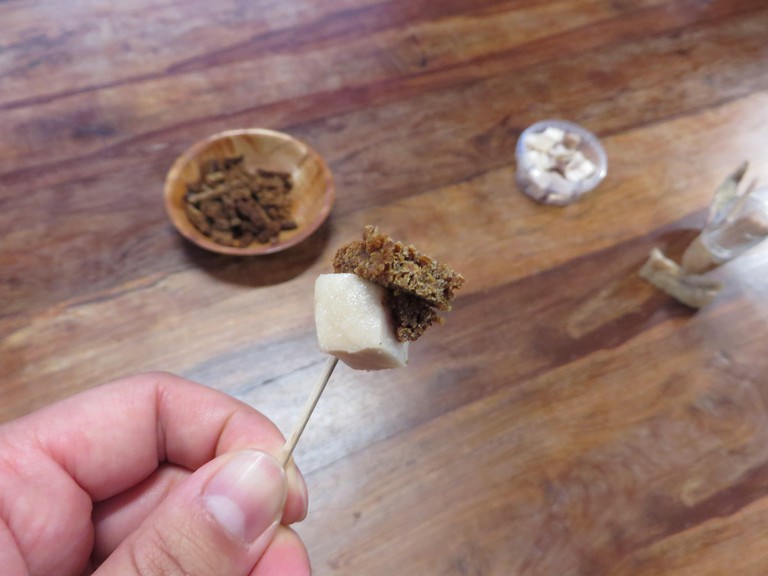 © Michiel De Prins / Alamy
Hákarl (fermented shark) is a traditional Icelandic delicacy renowned for its pungent, ammonia-rich stench and strong aftertaste. At the family-run Bjarnarhöfn Shark Museum, you’ll learn all about the biology of Greenland sharks and the fermentation process which turns the raw, toxic meat into an edible product. You can also visit the drying house where the meat is hung and, of course, you’ll get to try some for yourself – washed down with a shot of Brennivín (Icelandic spirit). Entry costs 1400 ISK (£8) for adults and children under-15 can go for free.

You can also try fermented shark and Brennivín as part of Culture Trip’s exclusive five-day Iceland adventure, led by our local insider. 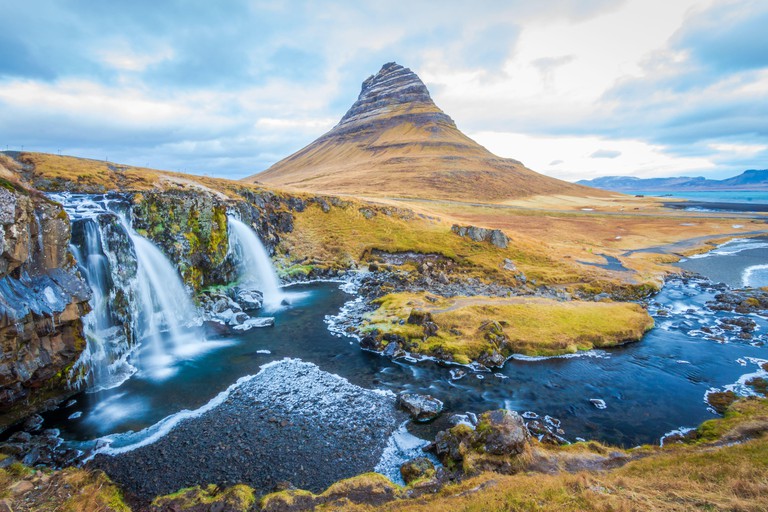 © Charles Sperry / Alamy
Kirkjufell – just outside the small fishing town of Grundarfjörður – is one of Iceland’s most recognisable landmarks and an essential stop when driving around the Snæfellsnes Peninsula. Featured in seasons six and seven of Game of Thrones, this peculiarly-shaped, 463m-high (1515ft) mountain was formed over millions of years by glacial erosion and is composed of layers of lava and sandstone. It’s too steep to hike up safely, but the walking trail – which runs from the parking area down to the nearby Kirkjufellsfoss waterfall – presents a prime photo opportunity. 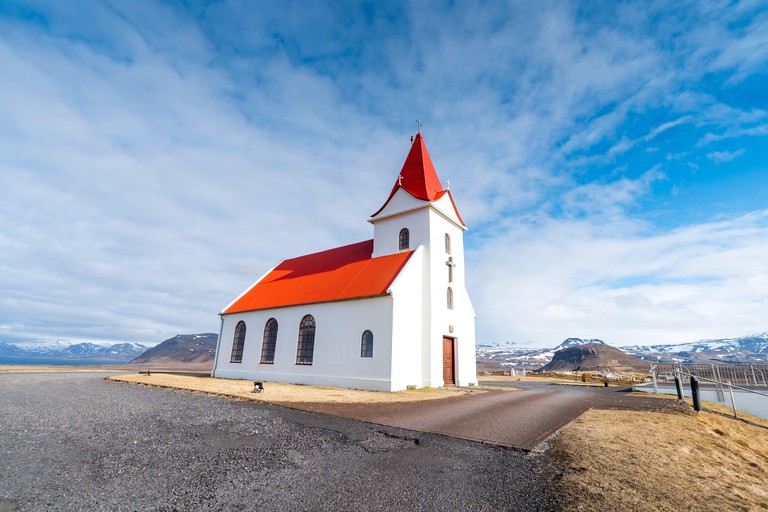 © Marek Rybar / Alamy
This picturesque red-and-white church – at the site of an abandoned farm – is Iceland’s oldest concrete church and is said to be where Christopher Columbus stayed in 1477. Supposedly, he was learning about Icelanders’ viking ancestors’ westward voyages, before his own expedition towards the Americas later that century. Indeed, there’s a painting depicting Columbus conversing with local clergymen inside the church today. It’s well signposted as you drive along Route 574 between Rif and Hellissandur and the view approaching the church – with the Snæfellsjökull glacier in the background – is utterly magnificent. 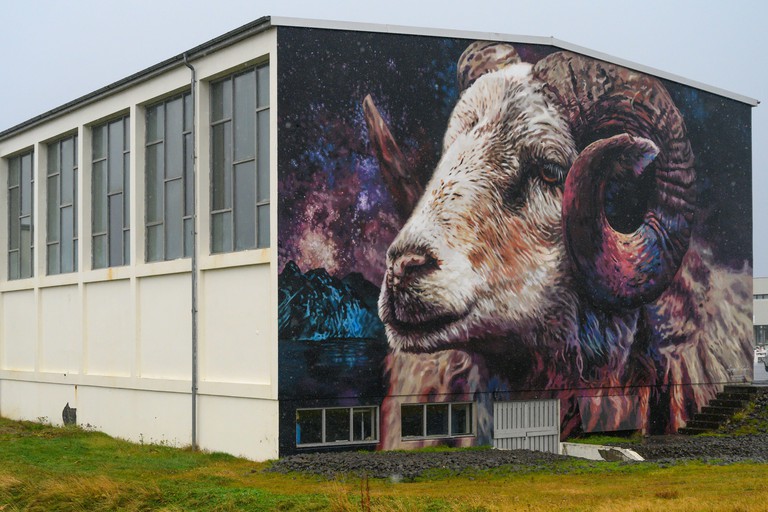 © Keith Levit / Alamy
The tiny village of Hellissandur – on the Snæfellsnes Peninsula’s northwestern tip – has risen to fame in recent years as the ‘street art capital of Iceland’. In 2018, Kári Viðarsson – founder of the Freezer Hostel and Cultural Centre in the nearby Rif – embarked on a project in collaboration with 10 international artists to produce a series of murals in Hellissandur, adding a vibrant splash of colour to this remote, windswept outpost. You’ll find the majority of these intriguing artworks in and around the old fish factory, but there are also several others dotted throughout the streets. 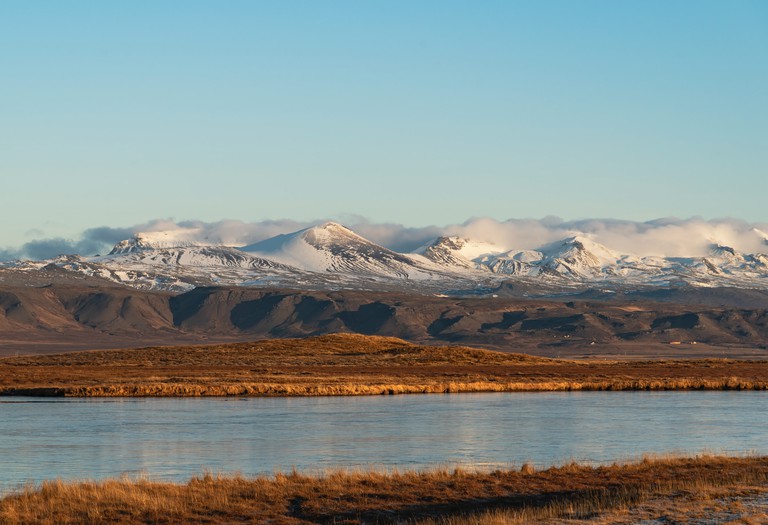 © Meng Ji / Unsplash
At the far end of the Snæfellsnes Peninsula lies the Snæfellsjökull National Park, which is dominated by a 700,000 year-old glacier-capped stratovolcano. If you have a 4×4, you can drive up close to the glacier on the F570 gravel road – alternatively, join an organised tour to hike to the summit. There are numerous other notable stop-off points as you pass through the national park’s ethereal lava fields: including Saxhóll Crater, the Djúpalónssandur black sand beach and Vatnshellir Cave, all of which are easily accessed via short diversions from Route 574. 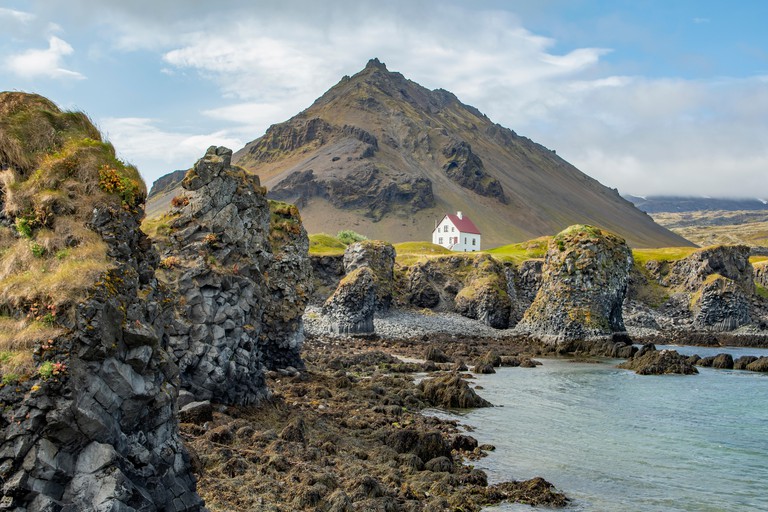 © Robert Wyatt / Alamy
The twin hamlets of Hellnar and Arnarstapi – on the south coast of the Snæfellsnes Peninsula – were once thriving fishing hubs back when Iceland was under Danish rule. You can walk between them by following a 2.5km (1.5mi) walking trail – which passes through a moss-covered lava field overlooking basalt columns and myriad other impressive rock formations, such as the Gatklettur stone arch. It takes around 30-45 minutes each way – and keep an eye out for Arctic terns, kittiwakes and fulmars as you go, before stopping by the delightful Fjöruhúsið café in Hellnar for a slice of delicious homemade cake. 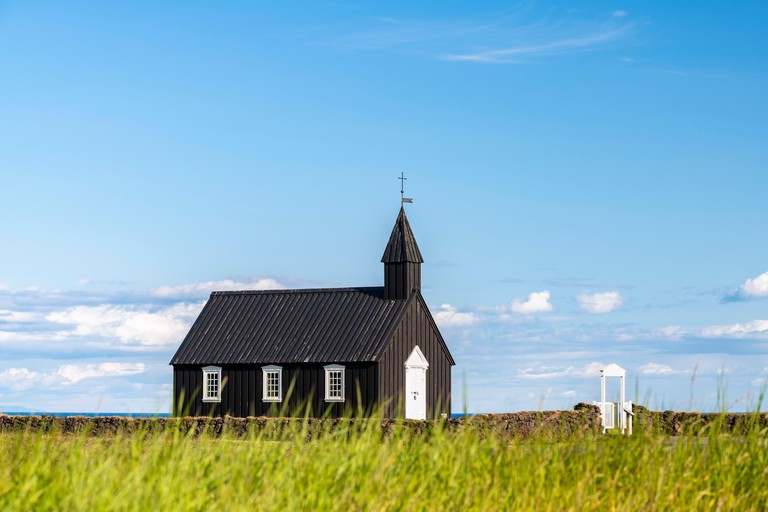 © ImageBROKER / Alamy Stock Photo
Perhaps the most photographed church in Iceland, there’s an almost eerie beauty about Búðakirkja – a jet black timber church, originally built in the early 18th-century but reconstructed and renovated several times since. Its isolated setting in the Búðahraun lava field – with snowy mountains in the background – makes for a striking scene, particularly when set against a moody sky. 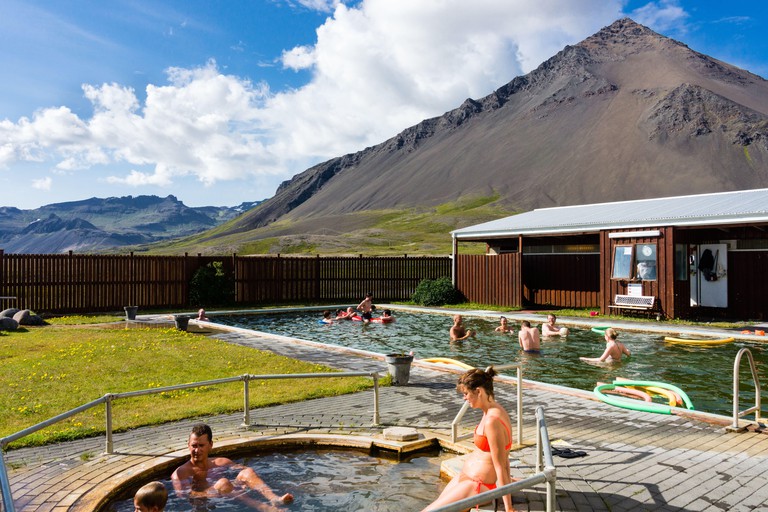 © Mauritius Images / Alamy
Geothermally heated pools are ubiquitous across Iceland and this one – on the south side of the Snæfellsnes Peninsula – is the perfect place to relax after a day of exploration. The green, algae-rich water – heated to 37°C-39°C – might not look overly appealing at first, but it’s wonderfully soothing and considered to have healing powers for the skin. You can also use the hot tub or – if you’re feeling really brave – the ice bath. It’s open from early June until mid-August and entry costs 1350 ISK (£7.77) for adults aged 17 and over.

Is Iceland on your travel bucket list? Experience it with our local insider as part of a small group of like-minded travellers on Culture Trip’s epic five-day Iceland tour, which includes a visit to the Blue Lagoon, glacier snowmobiling and a chance to spot the northern lights.