The Best Places to See the Northern Lights in Iceland 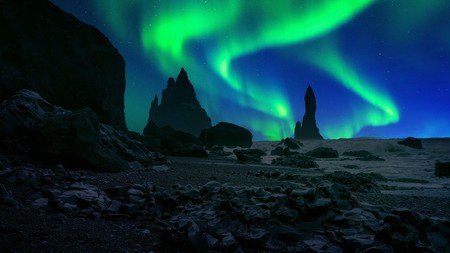 In Iceland, the Aurora Borealis is up there with glaciers, ice caves and volcanoes as one of the main reasons for visiting – but you need to know where to go. Here’s where you stand the best chance of seeing nature at its most spectacular.

There’s nothing like peering into an inky night sky that’s barely pin-pricked with stars when suddenly a shimmering river of colours, ranging from neon green to lavender and pale pink, undulates across it. Aim to head up during the winter months – you can join a tour between September and April, although the darkest days are in November, December and January.

You can test your luck to see the Northern Lights yourself by booking Culture Trip’s exclusive, five-day Iceland tour – complete with glacier hikes, waterfall wanders and more.

This large park, not far from the centre of Reykjavík, might not seem like the most obvious spot if you’re searching for the Northern Lights, but the rows of trees surrounding the perimeter do a pretty good job of blocking out light from the nearby apartment blocks. It’s so big that if you were to stand right in the middle, you’d be almost completely unaffected by light pollution, giving you a better chance of spotting the swirling colours marbling the sky. If you time it right, this is one of the best places to see the Northern Lights in Iceland. 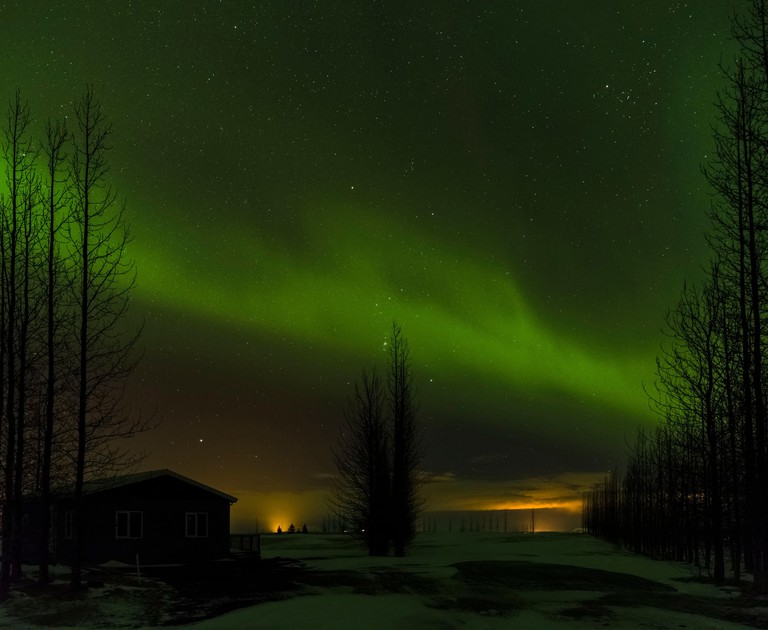 Laugardalur is home to a network of outdoor-activity areas on the outskirts of Reykjavík; it’s where locals come to stretch their legs on the hiking trails, in the sports centres and, when winter descends, on the ice rink. It’s also where you’ll find two large outdoor thermal pools, which stay open until 10pm. That should give you plenty of time to strike lucky with the Northern Lights as you sprawl comfortably in the steamy water. The lack of light pollution is an advantage, too. 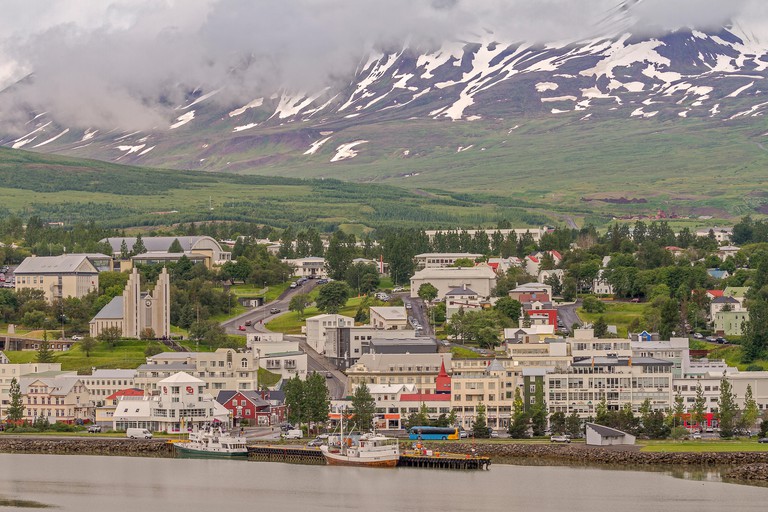 In the far north of Iceland, Akureyri is a port city with an attractive setting at the head of a huge fjord, picturesquely surrounded by snow-capped peaks. It’s small and remote enough to ensure light intrusion is minimal, even in its centre; therefore, on a clear night, if the heavens above are dancing with colourful streaks of light, you’re bound to find a front-row seat for the show. Being farther north and slightly closer to the Arctic Circle can also make a slight difference in how often the lights appear. 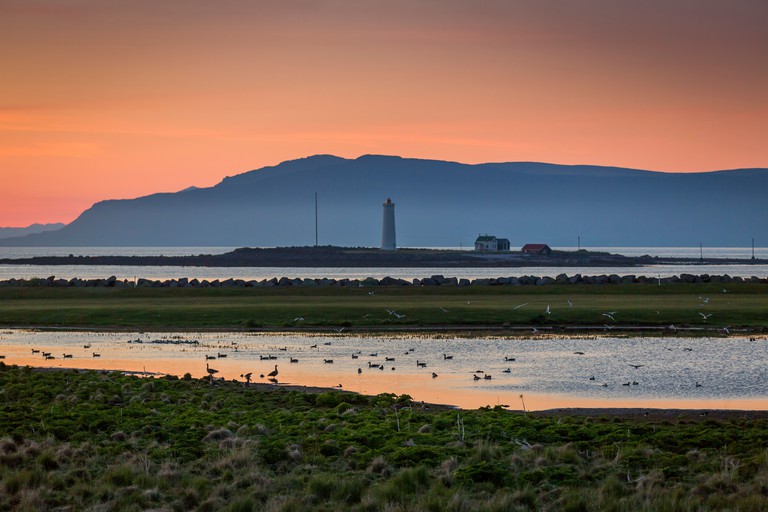 © ARCTIC IMAGES / Alamy Stock Photo
A birdwatching paradise by day, the nature reserve of Grótta is only a few kilometres from downtown Reykjavík. However, it feels as if you’ve driven much farther into the wilderness – it lies at the tip of the Seltjarnarnes Peninsula. With a jagged coastline and black sands rinsed by the icy Atlantic, it’s a hugely popular attraction in its own right. And as it’s away from the city lights, you have a decent chance of witnessing the Aurora Borealis, as well. Just dress warmly, as you don’t want the thrill to be muted by cold when the lights shimmy into view. 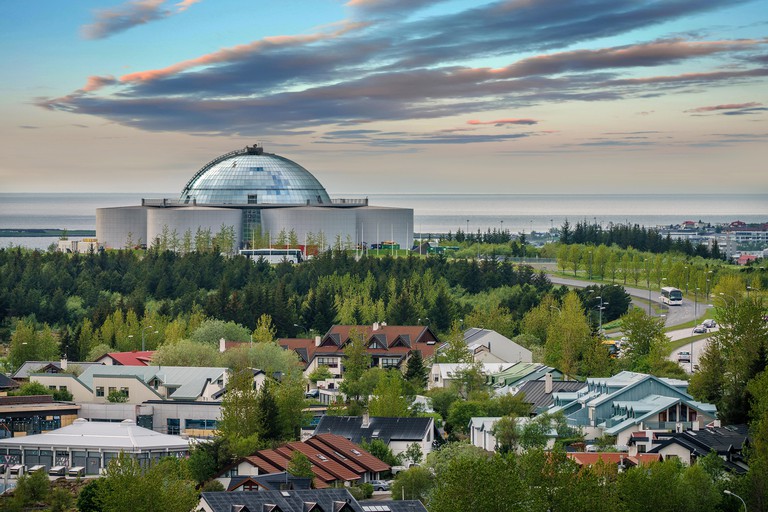 © ARCTIC IMAGES / Alamy Stock Photo
This large area of forested land beyond Reykjavík is where you’ll find Perlan, the futuristic-looking, glass-domed restaurant that appears to be a cross between a greenhouse and an observatory. There’s a good reason it sits up there, on top of a hill, away from the lights of the city centre. It offers a great chance of catching a glimpse of the Northern Lights as they streak across the sky, wriggling and reflecting like bioluminescent algae in the glassy black sea. 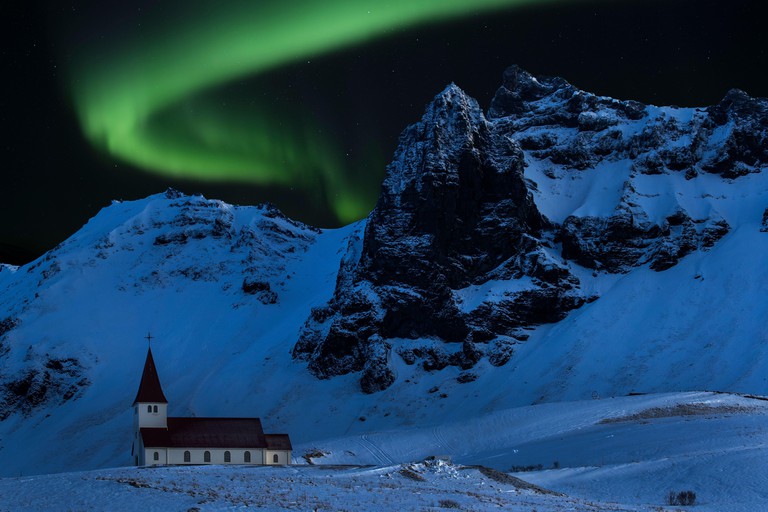 © Jim Zuckerman / Alamy Stock Photo
You’ll need to drive about 187km (116mi) southeast of Reykjavík, along the main ring road, to reach the desolate little beachfront of Vík, the most southerly village in Iceland. It’s home to only about 300 residents, and the black-sand beach just next to the small fishing settlement is an excellent backdrop for those magical dancing illuminations – hence the regular arrivals of tourists from town. Just keep your eye on the waves, which are known to be strong and lunge. 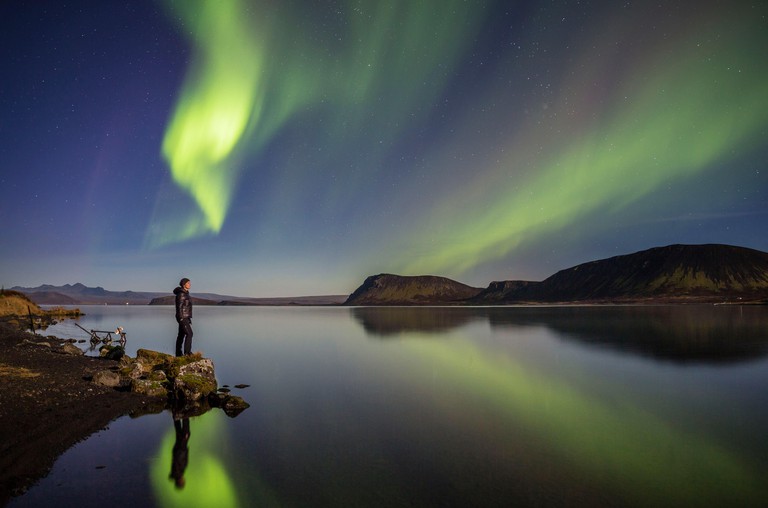 þingvellir National Park might have been custom-designed as a backdrop for the Aurora Borealis. Comfortably removed from the urban buzz of Reykjavík, it’s a dramatic landscape of lava rock and moss, making a formidable accompaniment to the main event. You’re looking at a little less than an hour’s drive northeast of the capital, and if you’re coming here, you might as well stay here. Check out the availability at the 5 Million Star Hotel. Close to the tiny western village of Reykholt, it’s a set-up of translucent accommodations – as delicate and spherical as blown bubbles – in which to spend the night stargazing while cosily sheltered from the wind and other weather elements. 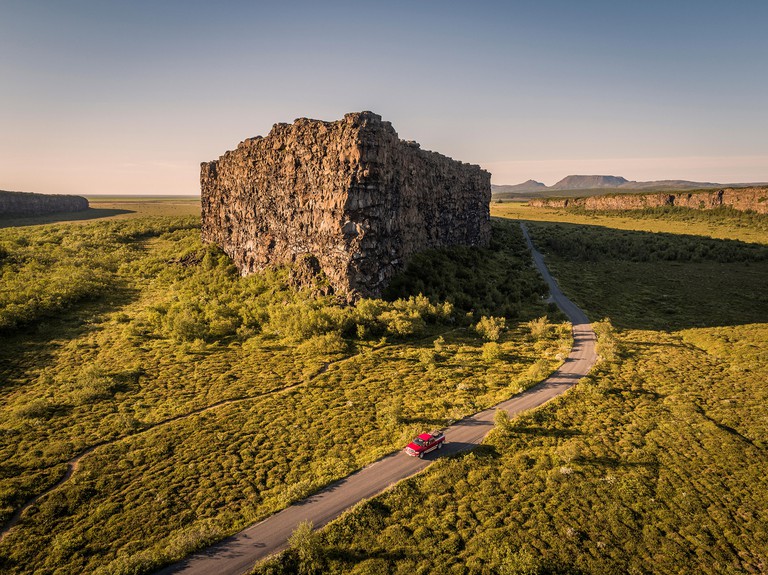 © ARCTIC IMAGES / Alamy Stock Photo
To find Ásbyrgi Canyon, which means Shelter of the Gods, head towards the northern town of Húsavik, on the shores of the mirror-still bay of Skjálfandi. The canyon is about 64km (40mi) beyond – an easy drive on the Diamond Circle road. Ásbyrgi is another beautiful, exceptional, far-flung location where you can lie back and admire the psychotropic antics of the Aurora Borealis far above. With cliffs rising 100m (328ft) high and a woodland forest of ash, birch and willow, this glacial canyon has an overall effect that is tinglingly good, cosmic and earthly.