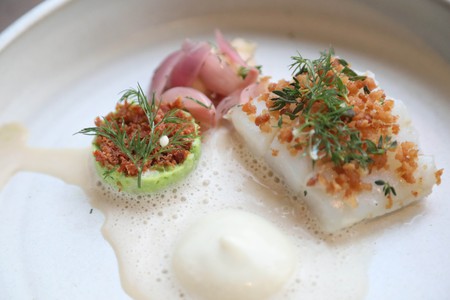 A dish from Taste of Iceland Chicago 2017 | © Taylor Banasik

He’s currently in NYC for Taste of Iceland. This weekend, you can taste his cooking at Norman, in Greenpoint, Brooklyn. As part of the special Taste of Iceland dinner series, $55 gets you a set four-course meal—which includes dishes like lightly smoked Arctic char with dill, green apples, roe, and Icelandic buttermilk.

We took the opportunity to talk with him about the current state of dining in his home country: his favorite restaurants in Reykjavik, traditional Icelandic dishes every visitor must try, the recent rise of locavorism … and how he really feels about fermented shark. 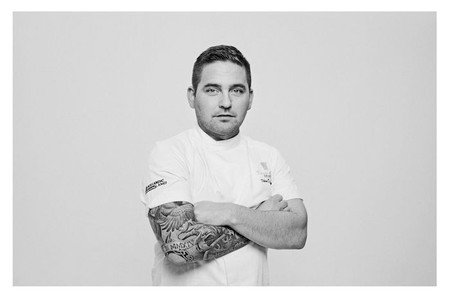 What’s an interesting place that visitors to Iceland may not have heard of yet?

We have a small market called Kolaportid, and there you can buy shark and a lot of things from the ocean. We opened a food hall in Reykjavik [Hlemmur food hall], and I think that’s a really good spot for people to go. It just opened last month, and I think it’s going to be really popular. You can choose between a lot of different small restaurants.

Is there a restaurant in Reykjavik you love that offers traditional Icelandic cuisine?

Yeah, but I haven’t been there in a while. It’s a restaurant called 3 Frakkar. It’s a really old restaurant, and they’re famous for their fish; you can get all the classical plates there, like plokkfiskur—it’s a fish stew—and fried fish with remoulade sauce.

For its modest population, Reykjavik has really fantastic dining options. My friend recommended that we try 3 Frakkar and we were really impressed. (A belated google search showed that this is apparently Jamie Oliver’s favourite Icelandic restaurant.) We tried the Hrár Hvalur Sasimi aô japönskum siô (Raw whale meat sashimi Japanese way) as one of the appetizers. Tastes like fusion of raw beef + raw fish. #icelandicfood #3frakkar #eatsshootsandleaves #foodpics

There’s one place where Icelanders go that’s a really popular restaurant. It’s on the harbor, it’s where all the sailors used to go, and it’s called Kaffivagninn. It’s open all day. There you can get Icelandic food and Danish food, like smoked salmon and smorrebrod and plokkfiskur—it’s just a stew of cod mixed with potatoes, and you boil it with cream, and you eat it with rye bread and a lot of black pepper. When I was growing up it was on the menu like two times a week. And now it’s popular; people love it. This restaurant is like a house on the harbor where all the sailors went, and my father was always there when I was younger. People still go there every day and drink coffee and talk about politics and things like that.

Which traditional Icelandic foods should every visitor try?

It depends on what they want to try, because I know some foods we do here aren’t popular in the States, like horse and whale, but they’re really good. If you don’t want to try those, shark and Brennivin is popular to try. Puffin and game meats like goose and reindeer are really good.

Do Icelanders actually eat these foods? Are they part of a normal Icelander’s diet?

Yeah. We don’t have it often, but salted horsemeat is something my mother made with yellow beets and potato. It’s really good. I just grew up with that on the table. I think it’s maybe not popular, but it’s always been there. Same for the whale, you don’t see whale meat everywhere, but you can buy it if you want. Puffin is really popular at the end of summer, like August.

Are there any traditional Icelandic foods that you think are overrated?

If someone says that shark is good, they’re lying. Shark is not really good, but I think it’s fun to try it. And if you’re there at Christmastime, in Iceland we have a tradition that we eat sour skate wings on the 23rd of December. It’s horrible.

But I think the lamb is really good, and all the fish is really good. Puffin is usually cured, and it maybe has a strange texture when you eat it; it’s a little bit chewy. I think people have to try it just to see. I know Icelandic lobster and langoustine are really popular and it’s also really good. So we have a lot of good things to at least try.

You can also get a lot of strange things. Like in September, now, you can get sheep head. For some people it’s maybe a little bit … scary. And also goose. Goose is really, really popular. We eat it in October.

It sounds as though all foods are really seasonal in Iceland. Is there a “best” time of year to dine there?

You can get lamb all year round, but I think maybe October or during Christmastime, we have lamb and beef and all the rest, and we also have game on the menu, so there’s more variety. And most of the fine restaurants have their regular menu and then they have their game menu. When it gets closer to Christmas, they take out the game and put the Christmas menu in, so then you can taste all of the traditional Christmas dishes. But in summertime it’s a lot of fish, and you can also get lamb—the lamb would be from the last season but I think it’s still good. 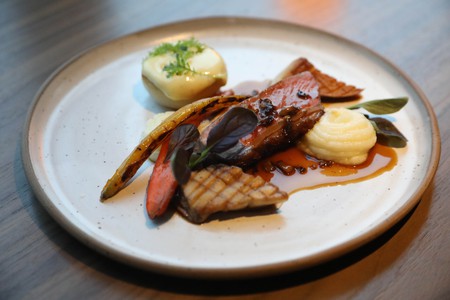 What are some of the traditional Christmas dishes?

The first is the skate; it’s eaten on the 23rd of December. They keep it in a basket for three or four months, and it stinks a lot. When people are cooking it at home, the smell goes everywhere. The day after, we usually make rack of pork. And then on the 25th, it’s smoked lamb.

Are there any current dining trends in Iceland you’re excited about?

It’s best to see it like before and after the financial crisis [which began in 2008]. Before, on menus you had, like, kangaroo, zebra, meat from everywhere in the world. And after the crisis, everything vanished, because it was so expensive to import it. I think that’s one of the best things about the crisis, because then, Icelandic chefs had to check what’s in their backyards. Local farmers started to grow a lot, and Icelandic food was really popular on the menus everywhere, because it was cheaper to get. So that opened a door for us to learn and know what we can cook for people, from Iceland. From the crisis until now, dining has been focused on the Nordic kitchen and Icelandic food, but now we can see some restaurants like Sumac, getting ingredients from elsewhere but still focusing on Icelandic ingredients.

What foods make good souvenirs from a trip to Iceland?

I think it’s really good to take smoked salmon and horseradish sauce and gravlax sauce—for me, that’s Christmas. If you like pickled herring, you can take a jar of that. Or also some cured lamb, like smoked lamb—sometimes they sell a whole leg; it’s like Serrano ham, you can just eat it raw. It’s really expensive but it’s really good. If you take shark with you on the airplane, don’t open it in the airplane, because they’ll have to land. Like, one small cube of shark can kill the room.