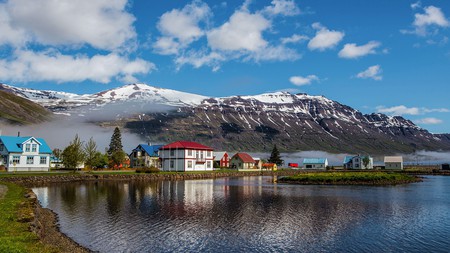 From awe-inspiring waterfalls, glaciers and geothermal springs to an eclectic mix of architecture, Iceland boasts an extraordinary array of natural and cultural attractions for its size. The long, dark winters and relative lack of light pollution also make it one of the most reliable and accessible places on earth to see the northern lights – which you now have the chance to do with Culture Trip on our specially curated five-day Iceland trip – led by our local insider.

A much murkier picture of this Nordic nation is portrayed by numerous popular murder mystery TV series, though, including Trapped, Case and the Valhalla Murders. These are characterised by bleak cinematography and slow-burning but gripping plotlines – interlaced with shocking twists to keep you guessing all the way through.

Iceland doesn’t quite have the international reputation of Sweden or Denmark when it comes to the Nordic noir genre, but that could soon change. In recent years – thanks to the creativity of award-winning directors such as Baltasar Kormákur and Baldvin Zophoníasson and heavy funding from RÚV, RVK Studios and most recently, Netflix – it has undergone a major boom in crime fiction to rival its Scandinavian cousins. 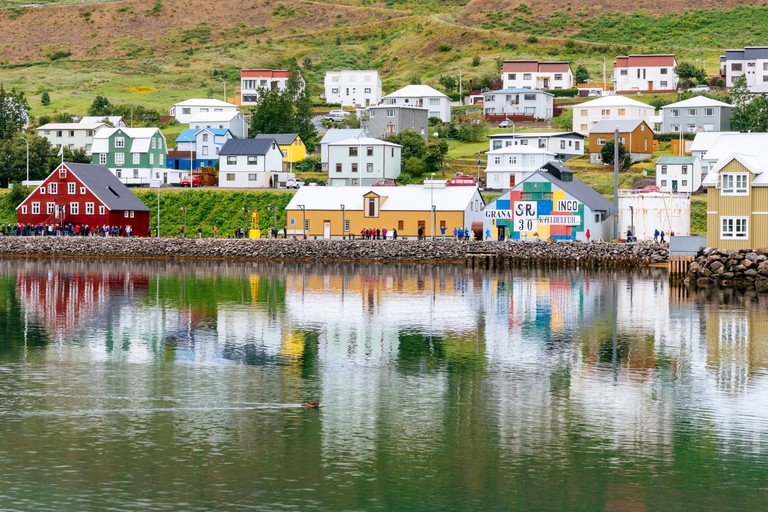 © Cavan Images / Alamy Stock Photo
At the far end of north Iceland’s Tröllaskagi peninsula lies the small fishing village of Siglufjörður, where most of the first two seasons of Trapped were filmed. Season three for the series –which is arguably the most successful Icelandic crime drama – began production in 2020. The cast and crew were trapped by a blizzard that blocked the road out of the fjord during filming – much like what happens to the town’s fictional residents in the series. In summer, Siglufjörður is a hiker’s paradise, while it’s great for skiing in winter. Beer drinker? Its superb craft brewery, Segull 67 – housed inside an old fish factory – is a must-visit. 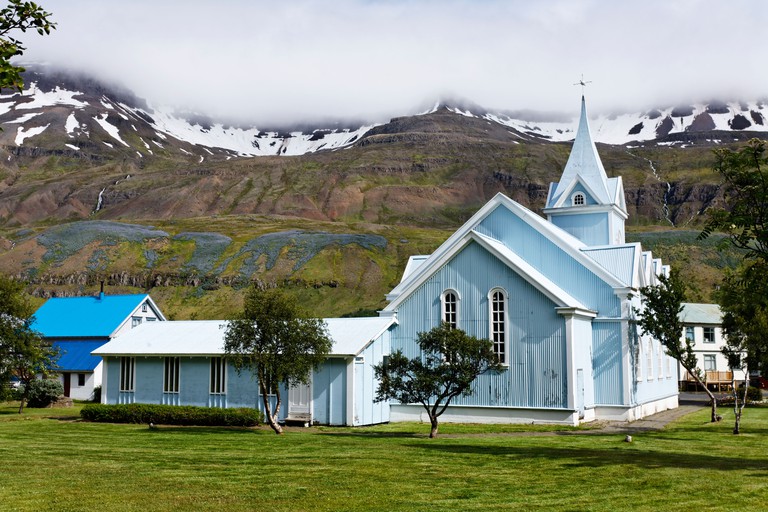 © Robert Preston / Alamy Stock Photo
The ferry you see docking in the first episode of Trapped is actually a real passenger vessel (Norröna), which links Hirtshals in Denmark with Seyðisfjörður in east Iceland, stopping in Tórshavn in the Faroe Islands en route. Although Siglufjörður is the main setting of Trapped, several scenes were filmed here. It’s well worth venturing 30 minutes off the Ring Road to visit this idyllic village, with its thriving art community. Browse for handcrafted souvenirs at Blóðberg and snap a photo at the Blue Church, renowned for the rainbow path leading up to it – one of Iceland’s most Instagrammable spots. 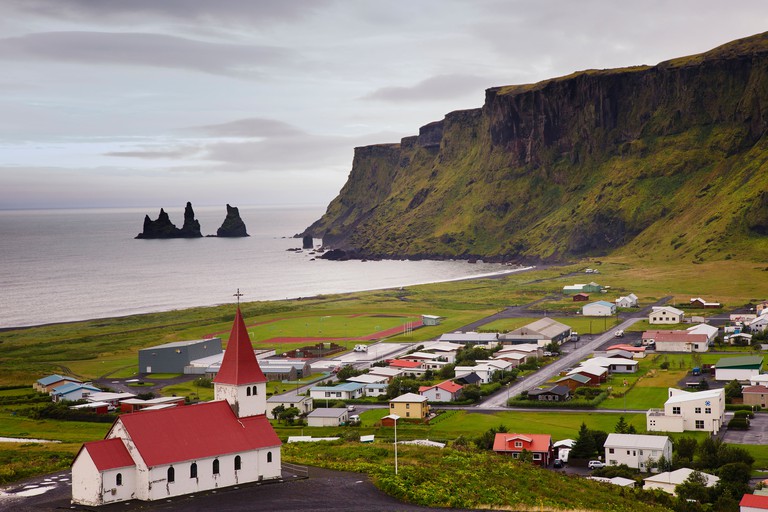 © David Brabiner / Alamy Stock Photo
Created by Baltasar Kormákur – also the director of Trapped – and Sigurjón Kjartansson, Katla is Iceland’s first Netflix Original series. This eerie eight-part series which was filmed during the Coronavirus pandemic in Vík on the south coast follows residents who remain in the town despite being advised to evacuate following the eruption of Katla – a real volcano hidden beneath the Myrdalsjökull ice cap. The usual Nordic noir formula is shaken up with a hefty dose of sci-fi in an almost apocalyptic setting: think ash-covered people – who were thought to be dead – emerging from the volcano.

With Culture Trip, you can visit spectacular sites including Sólheimajökull glacier, Reynisfjara beach and the Dyrhólaey lava arch around Katla and Vík as part of our five-day small group Iceland adventure. 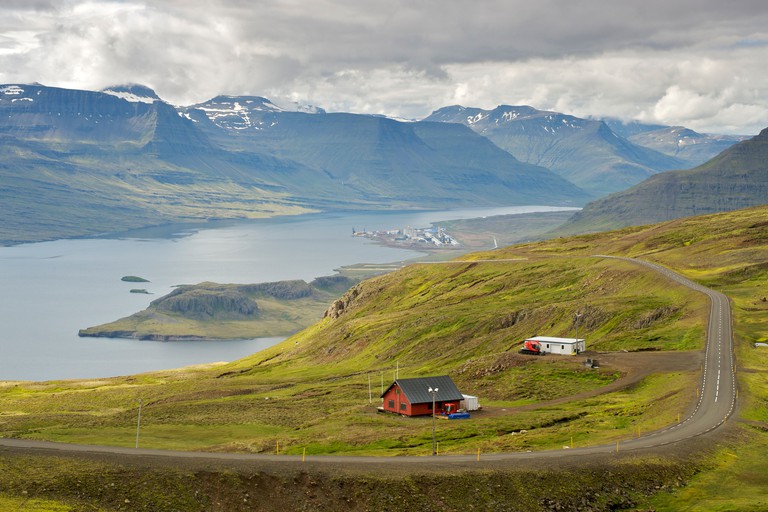 © Eric Nathan / Alamy Stock Photo
Sky Atlantic’s Fortitude is set in Svalbard in Arctic Norway, featuring Stanley Tucci, Christopher Eccleston, Sofie Gråbøl and Michael Gambon. But this twisted thriller – which morphs from a classic murder mystery into a grotesque environmental horror involving prehistoric parasitic wasps, psychotic polar bears and a demonic sheriff – was actually filmed in Reyðarfjörður, in east Iceland. You can visit the infamous Fortitude bar, Kaffi Kasg – which has kept the neon fox sign above its doorway – as well as the guesthouse, Tærgesen, right next door to each other on Búðargata. Directly opposite, the N1 gas station was used as Fortitude’s snowmobile store. 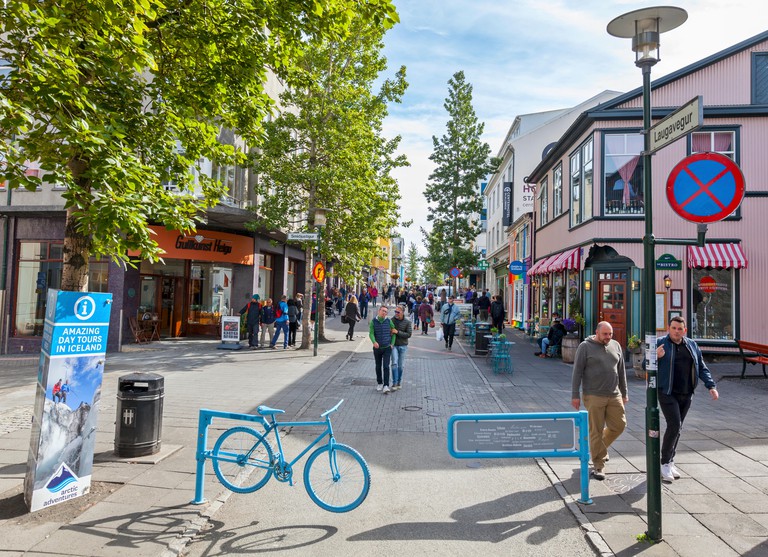 © Richard Green / Alamy Stock Photo
Far more than just a useful pit stop at the beginning or end of an Icelandic road trip, Reykjavík is a destination worth visiting for its architectural masterpieces, such as Hallgrímskirkja and Harpa concert hall – plus fascinating museums and vibrant café and bar scenes. Unsurprisingly, it features in several Icelandic crime dramas, too. The brutal opening scene of the Valhalla Murders takes place near Ægisgarður street at the Old Harbour – while Case is based around the mysterious chain of events leading to the death of a young ballerina at the National Theatre. 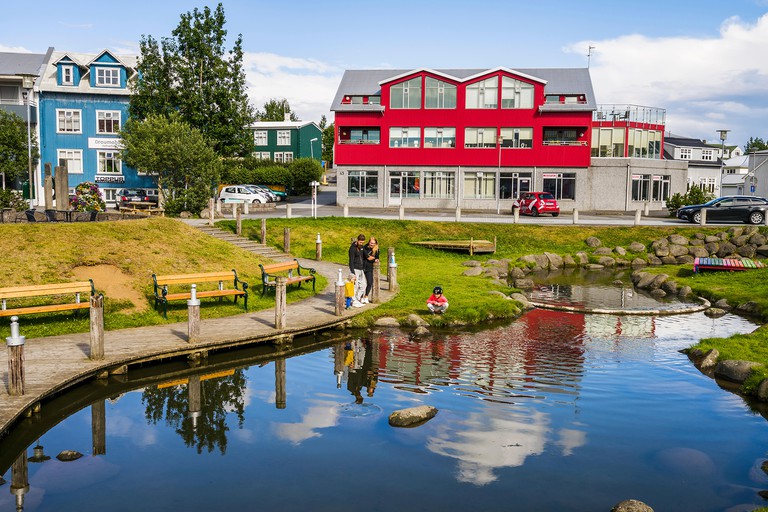 © ARCTIC IMAGES / Alamy Stock Photo
Head 10km (6.2mi) south of Reykjavík and you’ll arrive at Hafnarfjörður – the third biggest town in Iceland, home to around 30,000 people. The old swimming pool – Sundhöll Hafnarfjarðar – is where the pool party scene in Trapped (S1, E5) was filmed. It’s open to the public Monday to Friday and entrance costs 800 ISK (£4.60). While you’re here, take a stroll through Hellisgerði Lava Garden for an immersive introduction to Icelandic elf folklore – or admire the intriguing range of exhibitions on display at the Hafnarfjörður Centre of Culture and Fine Art.
Give us feedback