Ice & Fire: A Guide to Visiting Iceland's Most Awesome Glaciers and Lava Fields 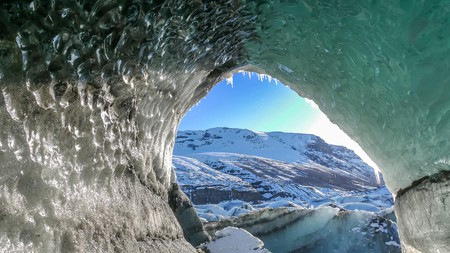 From the Sólheimajökull glacier to the Berserker lava field, the dramatic landscapes of Iceland are a sight to behold. These are the best destinations to see on an Ice and Lava tour, whether on your own or with a guided group.

It’s no secret why Iceland is heralded as the “land of fire and ice”. The volcanic nature of this starkly beautiful island is caused by the near-constant friction between two tectonic plates. Iceland’s unique location on the mid-Atlantic ridge, means the western part of the country sits atop the North American plate, while the east side perches on the Eurasian plate. The “ice” refers to the 269 glaciers covering roughly 11 percent of the island’s land mass. Magnificent geological features such as waterfalls, lava fields and glittering ice caves are in abundant supply. A visit to Iceland wouldn’t be complete without an ice and lava tour.

You can book your trip to Iceland with us – Culture Trip’s epic, five-day Iceland tour will take you to Sólheimajökull glacier, incredible waterfalls, relaxing hot springs and more. 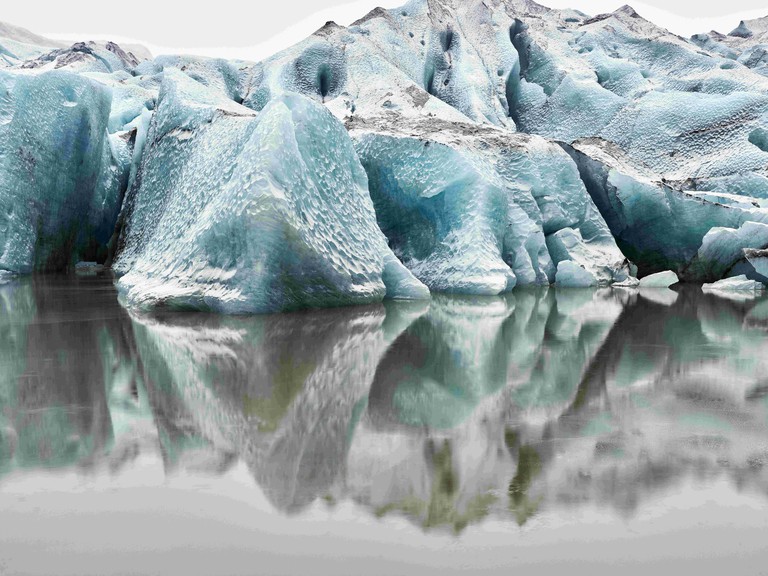 © Mark Robertz / mauritius images GmbH / Alamy Stock Photo
Sitting pretty atop Katla, one of the biggest volcanoes on the island, is the mountain top glacier, Mýrdalsjökull. One of its glacier tongues, jutting from the main body is Sólheimajökull. To enjoy the dramatic ice formations, including crevasses, ridges and sinkholes in all their glory, a Sólheimajökull tour is a must. The effects of climate change can be clearly seen here, as the ice has retreated about a kilometre (0.6mi) over the last decade. That’s fast for a glacier! 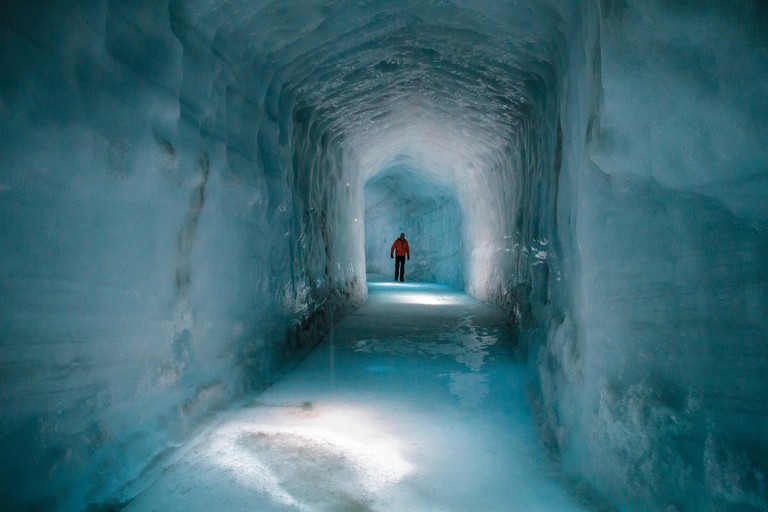 © David Weyand / imageBROKER / Alamy Stock Photo
The 3,500 year old Langjökull glacier is the easiest and quickest to reach from Reykjavik. It’s known as the Long Glacier because it is only 12mi (19km) wide, but 31mi (50km) long. Jump on board a 20 tonne NATO missile truck to access one of Iceland’s most impressive projects – the man-made Langjokull glacier cave. The white ice gradually transitions to bright blue icicle formations as you explore the 500-metre (1,640-ft) long ice tunnel. Listen for the creaking and cracking all around you in this ever-shifting marvel of nature. After enjoying the frosty beauty of the cave, whizz off on an exhilarating Langjökull glacier dog sledding or snowmobile tour to really make the most of your day. 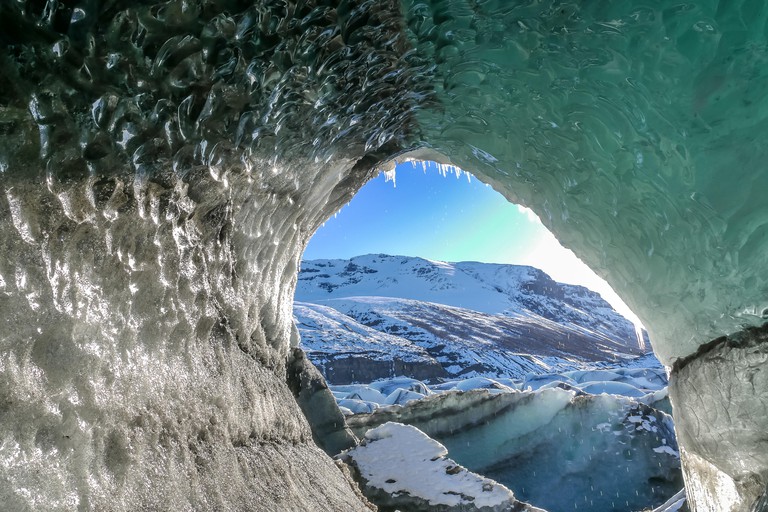 At its thickest point, the Water Glacier is almost a kilometre deep (0.6mi). At just over 8,000sqm (86,111sqft), it’s the largest glacier in Europe. You’ll see all the classic glacial geological features on a Vatnajökull glacier tour, including superb waterfalls, vast glacier rivers, steep canyons and beautiful glacier lagoons. This huge ice cap boasts around 30 glacier tongues spitting out from the main body as layers of crystal blue ice and volcanic ash.

One of the most stunning Icelandic lava fields was once the site of a cataclysmic event for Iceland and beyond. In 1783, an eruption known as Skaftáreldar (The Skaftá River Fires) caused natural disasters such as nationwide disease, crop failure and famine. A Sand Summer recorded that year in the UK is thought to have been caused by the fallout of ash from the eruption. It’s even been suggested that the haze blocking the sun may have had a part to play in the French Revolution! While marvelling at the numerous Lakagigar craters found in the region, it’s not hard to see why the Apollo 11 crew came here to practise for their moonwalk.

A rather grisly story from the Icelandic Eyrbyggja saga was set behind the road still visible across the bubbling basalt landscape of the Berserker lava field. Two men, known as Berserkers from Sweden (due to their rather aggressive nature) had come to the Snaefellsnes Peninsula to work. One of them fell in love with a farmer’s daughter. In return for his daughter’s hand, the farmer asked the men to build a road through the lava field, a seemingly impossible task. The farmer was alarmed to see the road quickly completed, but instead of holding true to his promise, he had the men killed. A haunting story to keep you company during your visit to this remote 4,000 year old site

Distance from Reykjavik: 100mi (161km), 2 hours
Entrance fee: Free
How to get there: By car, head north from Reykjavik on Route 1, which changes into Route 54, then Route 56. 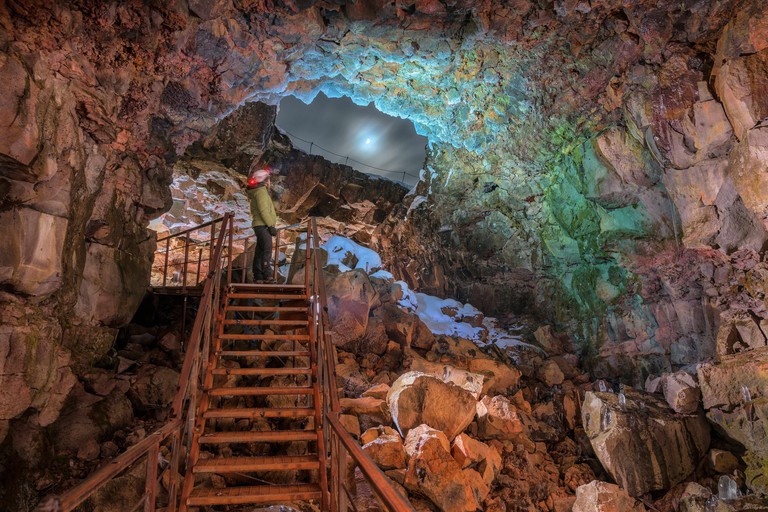 © Ragnar Th Sigurdsson / ARCTIC IMAGES / Alamy Stock Photo
This lava tube, or tunnel, was formed 5,200 years ago during the Leitahraun eruption. Walking in the path of the lava, along the 1.3-km (0.8-mi) long tunnel is a special experience that takes you right to the heart of Iceland’s powerful volcanic past. Rock falls have created holes, which allow three shafts of light to beam down near the tunnel entrance, giving an otherworldly glow to this fascinating place.

Distance from Reykjavik: 18mi (29km), 30 minutes
Entrance fee: From £40 for a guided tour
How to get there: Follow Route 1 east out of Reykjavik for 12 miles. Turn right onto Route 39 for another 6 miles. The car park is visible from the road.

Ever tried geothermally baked bread? Then step right up for a slice of Icelandic lava bread. This tightly-formed dark brown bread is made in a pan from an ancient recipe. Then, it’s buried and baked in the hot black sand for 24 hours. The walking tour from Laugarvatn Fontana takes you to the geothermal “oven” where the baker digs the bread up, ready to be tasted with Icelandic butter and smoked trout. Simply delicious!