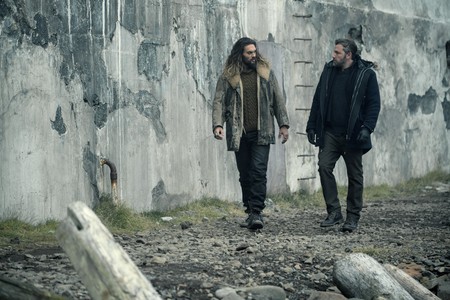 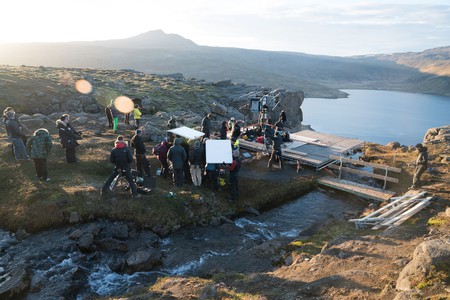 Fast becoming the go-to location for Hollywood, Iceland has recently seen the likes of Fast & Furious 8 (2017), Prometheus (2012) and the gargantuan TV hit Game of Thrones filmed in and around its stunning, often surreal, landscapes.

The latest film to head to the cinematic hotspot is Justice League, the superhero blockbuster that sees Batman, Superman, Aquaman, Cyborg, The Flash and Wonder Woman join forces for the first time on the big screen to save the planet.

The film marks the second appearance of Arthur Curry (played by Jason Momoa) following his brief cameo in Batman vs Superman: Dawn of Justice (2015). Curry is better known as Aquaman and, in the movie, he is approached by Bruce Wayne to join the forces of good. This moment of movie magic takes place on land, where Aquaman occasionally stops by. For those of you who have seen the film, the one thing that really stands out is the incredible location producers managed to find for the movie.

Djúpavík, a tiny hamlet that once used to be a fishing village, was chosen by director Zack Snyder as the terrestrial home for Aquaman, the half-human, half-Atlantean heir to the throne of the underwater city of Atlantis. The remoteness of the region was obviously a major appeal. In the film, the character is happy to spend his life in the sea and not trouble himself with human problems. His rare trips onto firm land are predominantly to sample hard liquor in a tiny bar where the locals keep themselves to themselves.

With just five houses and one hotel to its name, Djúpavík welcomed over 300 cast and crew members in October 2016 for the shoot of the movie. Even though it is just a small village, the hope is that the increased profile the film is sure to bring will also increase tourism in the area. The next nearest settlement, Hólmavík, has 375 inhabitants and is 221 km (137 miles) from the region’s main town Ísafjörður, which in turn has a population of just 2,600. Even by the isolated standards of Iceland, these are still relatively small numbers. 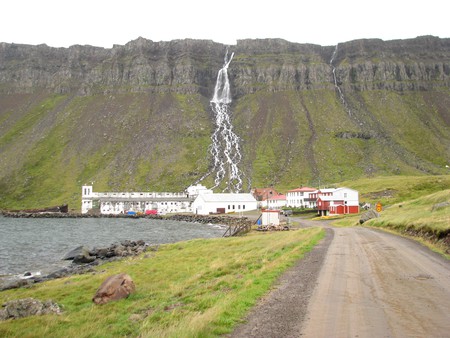 The Westfjords can be accessed by road from Reykjavik and is also serviced by two internal flights. A flight between Ísafjörður Airport and Reykjavik can take as little as 40 minutes. You’ll either need a guide with a car or hire your own vehicle on the other side, both of which can be arranged at the airport in the capital city.

Jim Rowe, executive producer on Justice League, commented: ‘In Djúpavík, there was an old, retired herring refinery and we decided on that immediately for our town hall. So, though we had intended on scouting a few additional locations, we found everything we needed in Djúpavík and came back home two days early.’

The old herring refinery in question might not process fish anymore (something bound to make Aquaman happy), but instead it processes people. It’s now part of the local (and only) hotel in town.

Magnús Karl Pétursson, the manager of Hotel Djúpavík, picks up the story. ‘I was contacted by the film crew originally asking if they could come and visit. Fast forward a few weeks and Zack Snyder is landing his helicopter in Djúpavík and jumping out to say hello and having a tour. He liked the factory, thanks to its authenticity I think. We have tried to keep it as close to how it was originally built as possible, so you can really get a sense of what it was like to work here when it was an operating factory.’

The hotel itself is actually built around the factory, and the rooms now assigned to guests were once used by the factory workers. 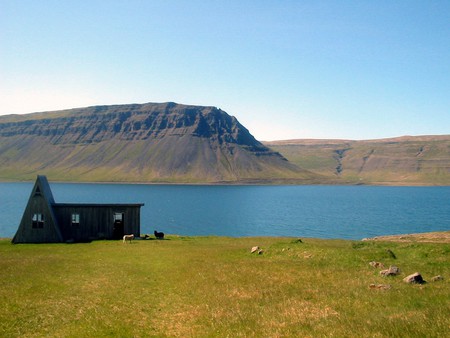 ‘As a destination, Djúpavík offers extensive hiking, kayaking and an Icelandic horse trekking trail,’ says Díana Jóhannsdóttir from Visit Westfjords. ‘Another focal point, in nearby Krossnes, is a geothermally heated pool that offers hot water swimming all-year round and is picturesquely located on the beach.’

Jóhannsdóttir continues: ‘Iceland is very popular with tourists from all over the world. However, because the Westfjords is further away from the international airport it can often be bypassed as a place to come and see. If more people who come to Iceland travel a little bit further they will enhance their travelling experience. The Westfjords is truly untouched and remote and can offer something extra.’

For more information about the area, visit Inspired by Iceland.

Justice League is in cinemas now.