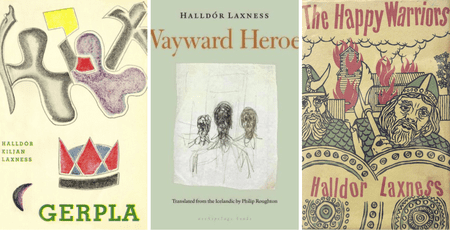 We review Wayward Heroes, a new translation of a saga written by Iceland’s only Nobel laureate: the poet, journalist, and novelist Halldór Laxness (1902-1992). 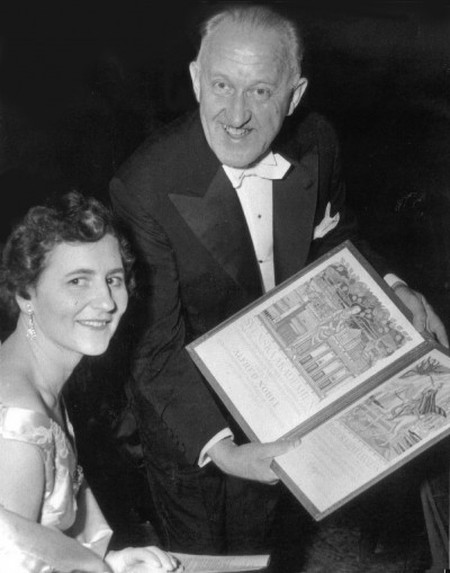 On December 10, 1955, a 53-year-old Halldór Laxness — stately, distinguished, in a tux — ascended the stage at the City Hall in Stockholm to deliver his acceptance speech (or so I assume, no footage of the address actually exists) for the Nobel Prize in Literature, as is wont of champions, medal-bearers, and heroes. But instead of speaking of life ambitions or waxing poetic, political, or philosophical, he spoke of family, of home, of Iceland:

[…] I thought – as I still do – of the moral principles [my grandmother] instilled in me: never to harm a living creature; throughout my life, to place the poor, the humble, the meek of this world above all others; never to forget those who were slighted or neglected or who had suffered injustice, because it was they who, above all others, deserved our love and respect, in Iceland or anywhere in the world. I spent my entire childhood in an environment in which the mighty of the earth had no place outside story books and dreams.

When surveying his body of work, it becomes clear that Laxness’ grandmother, who “taught [him] hundreds of lines of old Icelandic poetry before [he] ever learned the alphabet,” gave him more than just this one gift — a perception of the noble in the seemingly humble, yes, but also a miraculous talent for storytelling, one that is deeply entrenched in the Icelandic literary tradition (Laxness today remains the only Icelandic Nobel laureate).

Amongst the body of work for which Laxness was recognized by the Swedish Academy was his 1952 Gerpla, translated from the Icelandic as Happy Warriors in 1958 by Katherine John, and, now, as Wayward Heroes by Philip Roughton. Both titles seem at first woefully terse for a nearly 500-page opus that tells the tale of two oath-brothers, Þorgeir and Þormóður, in their misguided quest for greatness. And the account is never jocular or playful, as John’s title might suggest, but rather grim in that classic mood of Nordic solemnity; perhaps Roughton’s interpretation of the title, both vague and telling, is more suggestive of the portrait of youthful indiscretion that Laxness paints.

Equal parts homage and pastiche, Wayward Heroes builds upon existing Icelandic sagas and begins with the brutal murder of farmer Hávar Kleppson, witnessed by his young son Þorgeir Hávarsson. Þorgeir forges himself weapons out of iron, going so far as to trade food for metal, as he claims, “Iron is more to my taste.” Þorgeir’s mother has reared him to disdain the humble work of farmers and rural folk, the very people that Laxness praised in his Nobel address, and instead encourages Þorgeir’s hawkish ways. Her reaction, when he returns from “settling a debt” — Laxness’ way of saying ‘clubbing to death’ — with Jöður, the cause of Hávar’s untimely end, is to embrace him and celebrate with a dinner of freshly slaughtered lamb.

Meanwhile, in nearby Laugaból, young Þormóður Bessason, well-versed in the existing lore and stifled by small-town life, much like Laxness himself, begins to weave his own verses. The young boys soon meet when Þorgeir visits a relative’s house, and, in an unexpectedly touching moment, Þormóður is so impressed by Þorgeir’s retaliation against Jöður that he composes a poem about it:

After his arrival in Reykjahólar, Þormóður recited Þorgeir’s Revenge for the gathered household. Few had anything to say about the poem except Þorgeir himself, who stated that it would be on people’s lips as long as the North was inhabited. Yet he deeply lamented that his poverty should prevent him from granting its skald a fitting reward, and declared that instead, Þormóður would have his friendship as long as they both lived.

The passage evokes a sense of promise, of possibility, as youth often does. There’s a sense of two halves coming together — an exceptional warrior and precocious storyteller, for in this rendering of 11th century Iceland, words are only useful for praising victors and violence. The duo embarks on a swash-buckling adventure through a newly Christian Europe, eventually going separate ways — Þorgeir ending up in England and France, Þormóður choosing the charms of a woman. And yet what could have been a promising future for two remarkable young men becomes, instead, a strange, haunting meditation on the dangers of war worship and an unrelenting desire for power.

Taken in context of the twentieth century, Wayward Heroes, published three years before he won the Nobel, becomes an allegory of US–Soviet relations during a Cold War that was then at its zenith. Surprisingly, Laxness was a Soviet sympathizer (in his 1948 novel The Atom Station, Laxness wrote critically of the US after it attempted to purchase Icelandic land for a military base), though he later denounced the socialist state after its violent crackdown in Hungary during its 1956 uprising.

That the allegory comes through is a remarkable feat of both authorship and translation. Wayward Heroes brims with foreign names, Icelandic glyphs, and esoteric references that might otherwise distance readers from the story, but Roughton doesn’t allow any of it to get in the way: The beauty of Laxness’ gray, severe novel is rendered into the breed of elegant English that one might find in translations of The Iliad or Beowulf. It’s this excellent translation that allows Wayward Heroes to find relevance with contemporary readers and ring true — politically and socially — as it did in 1955 and medieval Iceland. The naivety of youthful arrogance, the irredeemable quest for glory through bloodshed and senseless violence, the power games of relationships, are all a testament to the magic and sadness of Laxness’ storytelling abilities.