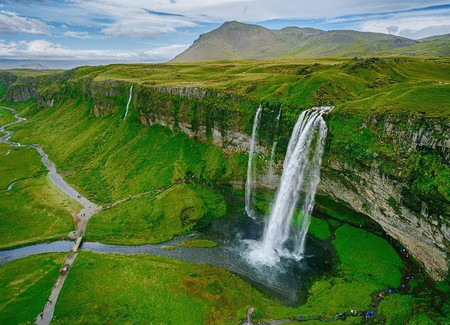 Can’t wait until the next season of Game of Thrones? This amazing footage of the real Westeros will help ward off those cravings.

Entitled Nord, Russian photo maestro and videographer Dmitry Bubonets spent months capturing the dramatic landscapes of the two northerly countries. From start to finish, the video features emerald green fjords, gigantic waterfalls, steaming geysers, and some of the most stunning river-webbed valleys you’ll ever set your eyes upon.

The land of waterfalls, 🇮🇸

tip No.4. Be careful. During our hike one tourist fell down from the top of Iceland's highest waterfall Glymur. Possibly not to the bottom, someone heard him screaming for help. Rescue team asked to fly around and try to find him but I couldn't because of rain and heavy winds. take care.

If you didn’t already know, Iceland has featured heavily in Game of Thrones since Season 2. Its fjords, glaciers and snowy tundras have provided fabulous backdrops for lead characters such as Jon Snow, the rest of the Night’s Watch and the Wildlings north of the wall, while some of its more verdant expanses have been showcased during the adventures of Arya Stark, the Hound and the Knights of the Vale.

As Bubonets said in a recent interview, “The landscape is not totally from this Earth.”

Watch the video below and decide for yourself.

Love Iceland? Check out this awesome video which shows a volcano erupting during the Northern Lights!