A Tour of Contemporary Architectural Landmarks in Reykjavik 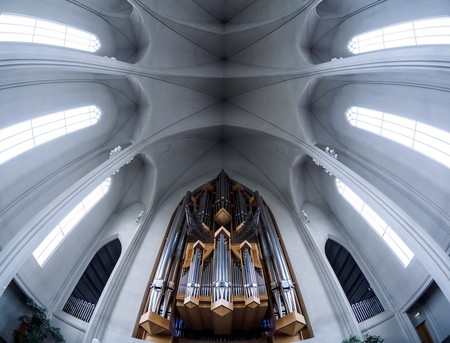 Reykjavik is quite small and compact and makes a great place for walking between landmarks. This tour will take you through the green lawn of Klambratún Park in East Reykjavik to the Mýri area near the University through downtown and over to the oceanside Harpa Concert Hall. For a place with rather young architecture, Reykjavik has made up for the centuries of living in impermanent structures with these ten remarkable architectural highlights.

Built in 1973, Kjarvalstaðir was the first structure built in Iceland solely devoted to the presentation of visual art. First intended to be a studio and home for the beloved Icelandic painter, Jóhannes S. Kjarval (1885-1972), it came to become a museum displaying a permanent collection of his artworks and now holds temporary exhibitions of Icelandic and International Art. The floor-to-floor ceiling windows and angular layout are a tribute to Nordic Modernism. Designed by architect Hannes Kr. Daviðsson, it is located a short distance from downtown Reykjavík and less than one kilometer from Hallgrímskirkja.

Within Kjarvalstaðir itself is the lovely Kjarvalstaðir café, operated by Marentza Poulsen (who also runs Cafe Flora in the Reykjavik Botanical Gardens), which offers homemade cakes, soups, and salads.

Hallgrímskirkja is a Lutheran church standing 74.5 meters high, making it the largest church in Iceland. It is named after the Icelandic poet and clergyman Hallgrímur Pétursson (1614-1674). The state Architect Guðjón Samúelsson designed the church, commissioned in 1937, with inspiration from mountains and glaciers in the landscape. It is an example of Expressionist architecture and is similar to Grundtvig´s Church in Copenhagen constructed in 1940. Hallgrímskirkja took 41 years to build: construction started in 1945 and ended in 1986.

The church is just across the street from the Einar Jonsson sculpture museum.

Cafe Loki is an option for traditional Icelandic dishes like meat soup or Kol Restaurant is great for excellent cocktails.

The museum was built according to plans laid by the Icelandic sculptor, Einar Jónsson (1874-1954), and thus can be considered his biggest sculpture. The building has served as his studio and a gallery as well as his home. In 1909, Einar Jónsson offered all of his works as a gift to the Icelandic people on the condition that a museum be built to house them. Although the museum is the work of Einar Jónsson, it was the architect Einar Erlendsson who officially signed the plans for the museum in 1916, the same year the foundations were laid. It would officially open in 1923, a huge event as it was the country’s first art museum. The architectural style is mixed from Expressionism to Classicism and represents an eclectic amalgamation.

It takes a one-kilometer walk from the museum to get to the Nordic House. 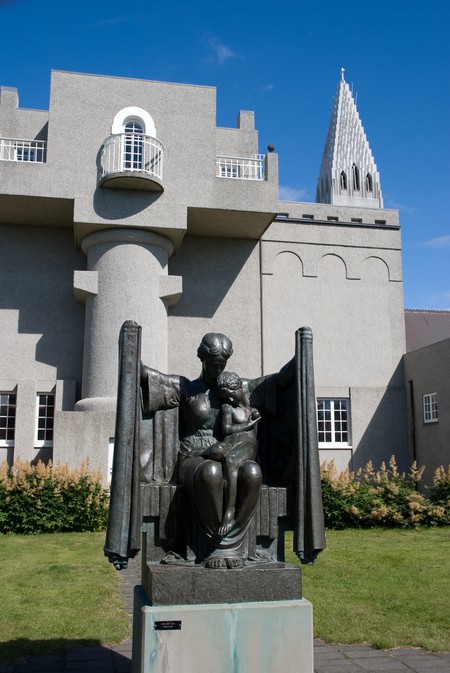 The Nordic House organizes a diverse program of cultural events and exhibitions relating to the Scandinavian countries. The house is designed by Finnish modernist architect Alvar Aalto (1898-1976) and features most of Aalto’s signature traits, including furnishings by his design. The Nordic House also houses a unique art library.

Head back towards downtown for a 20-minute walk to Landakótskirkja. 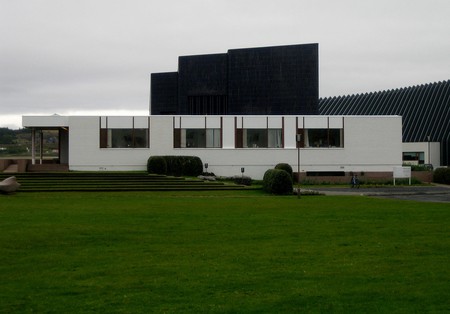 Within The Nordic House is the Aalto Bistro, serving fresh, local cuisine that changes with the seasons.

Formally known as Basilika Krists konungs (The Basilica of Christ the King), Landakótskirkja is the cathedral of the Catholic Church in Iceland. Its architect was the state architect at the time of its construction, Guðjón Samúelsson, who also designed Hallgrímskirkja. After years of construction, Landakotskirkja was finally sanctified in 1929. With its prominent Neo-Gothic design, Landakotskirkja is a distinct landmark in western Reykjavík. It is located just 500 meters from the Icelandic Parliament building.

Try Fiskmarkadurinn for lunch or dinner, or for something more casual, try a falafel at Mandi.

The Icelandic Parliament Building (Alþingishúsið) is a classical 19th-century structure situated by Austurvöllur square in central Reykjavík. The building was designed by Danish architect Ferdinand Meldahl and built using hewn dolerite from 1880 to 1881. The Parliament Building has housed different institutions for Icelandic society, such as the Icelandic National Library, the Icelandic National Gallery, and the University of Iceland from 1911 to 1940. The President of Iceland also had his offices in the building until 1973. Today, only the debating chamber, a few small meeting rooms, and the offices are actually located in the building. In the park in front of the building is where the famous protests erupted during the financial crisis in 2009. 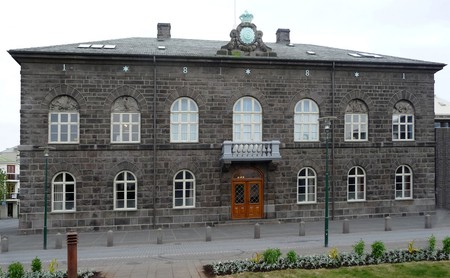 Bergson Mathus is just around the corner, offering bistro-style dishes and an excellent fish of the day. Cafe Paris is across the square for the best French menu in Reykjavik.

Located next to the Icelandic Parliament Building, Hotel Borg is another architectural landmark in Reykjavik. The hotel’s 99 rooms and suites have an Art Deco style throughout to match the hotel’s facade. Hotel Borg was originally built by Jóhannes Jósefsson, who, after competing in the 1908 Olympics and traveling in America with Barnum & Baileys Circus, returned to Iceland in 1927 with the dream of building a luxury hotel. This was much needed at the time in Reykjavik as more and more foreign heads of state were visiting. Since the hotel’s opening in 1930, it has hosted many cultural events. From Hotel Borg it is just 500 meters towards the ocean to reach Harpa. 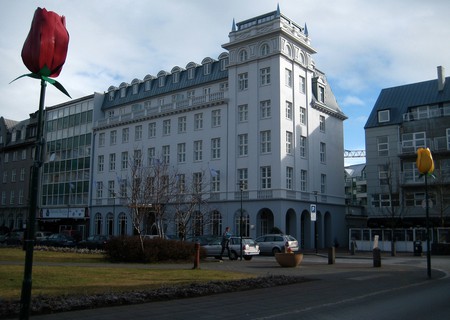 The relaxed cocktail bar Nora Magasin is just next door, and next door to that is Apotek Restaurant.

Harpa Concert Hall is a Reykjavik landmark and home of the Icelandic Symphony Orchestra as well as the Opera and hosts an array of cultural events and concerts throughout the year. Constructed between 2007-2011, the building was designed by the Danish Henning Larsen Architects in collaboration with Icelandic Batteriid Architects. The façade is by the Icelandic-Danish artist Ólafur Eliasson. Inspiration was taken from the natural Basalt columns found in the Icelandic landscape. Harpa has gathered numerous awards for its design and architecture, including the Mies van der Rohe 2013 Award and the Best Nordic Public Space 2011 award.

From Harpa, it is just 500 meters to The Culture House next to Arnarhöll, the hill facing Harpa. 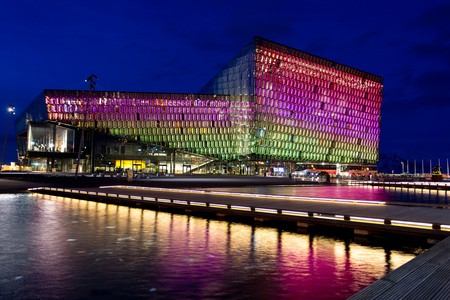 Within Harpa itself is the Italian style Kolabrautin on the very top floor and the espresso bar/café Smurstöðin on the ground floor.

The Culture House, or Safnahúsið, is an exhibition space which houses the permanent exhibition, Points of View, which drawn from various national museums and other cultural institutions to provide a visual tour of Icelandic culture. It has been part of the National Museum of Iceland since 2013. The building was initially constructed to house the National Library at its construction between 1906–08 by the Danish architect Johannes Magdahl Nielsen.

The Culture House is located next to The National Theatre. 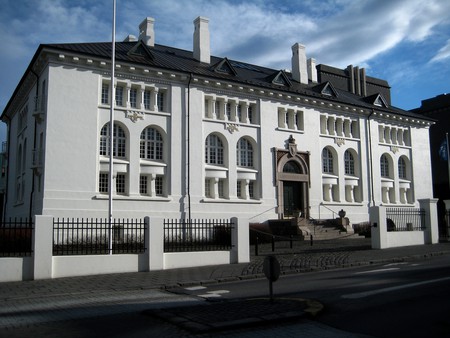 Within The Culture House itself is the lovely café, Julia & Julia, offering excellent coffee, pastries, and sandwiches, as well as the summer specialty of champagne, cake, and a blanket to sit on the hilltop lawn next door.

The National Theatre of Iceland 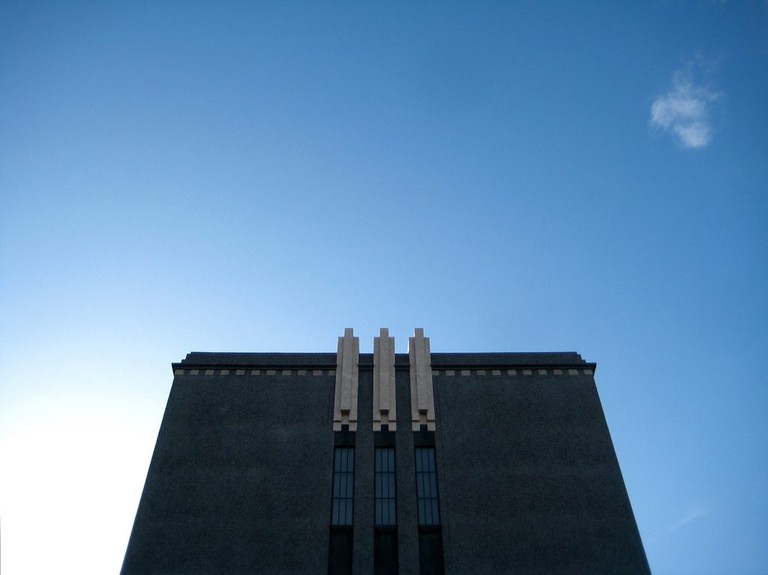 Þjóðleikhúsið | Þjóðleikhúsið
The National Theatre of Iceland was designed by Iceland’s first state architect Gudjón Samúelsson in 1950. Its architecture combines inspiration from the natural geology of Iceland, especially the basalt columns such as those at Svartifoss and Art Deco elements in the window parapets.Nearby Food/Drink Spots

Try the only Michelin starred restaurant in Iceland on the corner of Hverfisgata and Ingolfstraeti, Dill.
Open In Google Maps
19 Hverfisgata, Miðborg Reykjavík, 101, Iceland
+3545511200
Visit Website
Give us feedback
Give us feedback