A Look at the Legacy of Video Art in Iceland 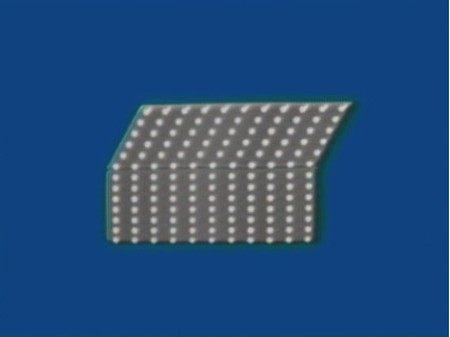 "The Matter," Steina and Woody Vasulka, 1974, Screenshot |Courtesy of The Vasulka Chamber / The National Gallery of Iceland

The video art pioneers, Steina and Woody Vasulka, are leaving an archive of their legacy at The Vasulka Chamber in The National Gallery of Iceland in Reykjavik. Read about their important role in the development of video art as a viable artistic medium beginning with their early days in New York City in the late 1960s with other influential artists, such as Nam Jun Paik and Vito Acconci.

When Steina and Woody Vasulka arrived in New York City in 1965, they were met with a burgeoning cultural revolution of which electronic technology was at the forefront. As pioneers of video art who helped to shape the medium, the Vasulkas were also crucial in their role as cultural archivists whose life work bridged the transitions made by electronic devices from analog to digital and their impact in the cultural sphere. Steina, born in Reykjavik, Iceland in 1940, was studying violin and composition at the Prague Conservatory when she met Woody, born in 1937 in Brno, formerly Czechoslovakia, who was studying documentary filmmaking. Their respective backgrounds helped to shape the breadth of their exploration of video in theory and practice. 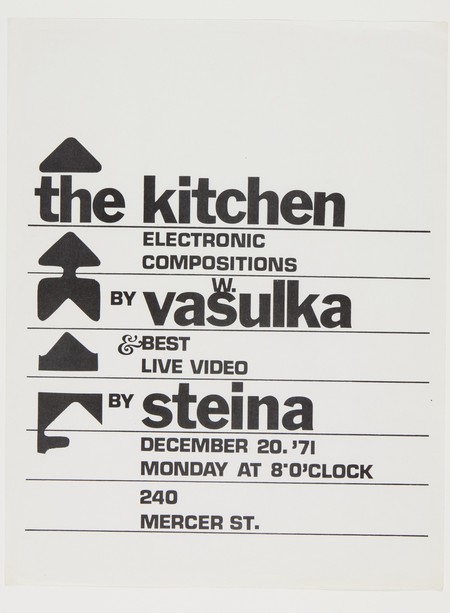 Early Flyer from The Kitchen | Courtesy of The Vasulka Chamber

In New York City, Steina pursued freelance music gigs while Woody worked in the editing department for Harvey Lloyd Films, whose film equipment the Vasulkas would use for their first experiments. There were many avant-garde activities going on around them at the time in which they would only later begin to participate. Many of these early cinematic experiments were sometimes termed “intermedia,” as they included light shows as well as multiple film projections that played with a plethora of sensory spheres. They were influenced by Marshall McLuhan’s Theories of Media, theories based on the premise that all media are extensions of the human nervous system.

In 1967, Woody participated in the development of a multi-screen exhibition for Expo ‘67 in Montreal. This invitation to experiment with multi-screen exhibitions made him realize the flexibility of video that film, with its convention of narrative, did not allow. In the years following, he would work primarily with video, sharing it with Steina as well. Although the Vasulkas’ early video experiments were not unique, as they were making feedback loops with audio to rearrange the video signal, which others had previously done, there was still an atmosphere of pioneering in the landscape of video. This was perpetuated by the informal nature of its exchange as information was spread by word of mouth at lofts and clubs, or via small ads. They found themselves in the midst of the exploration of video’s potential for creative expression as well as a socio-political tool. 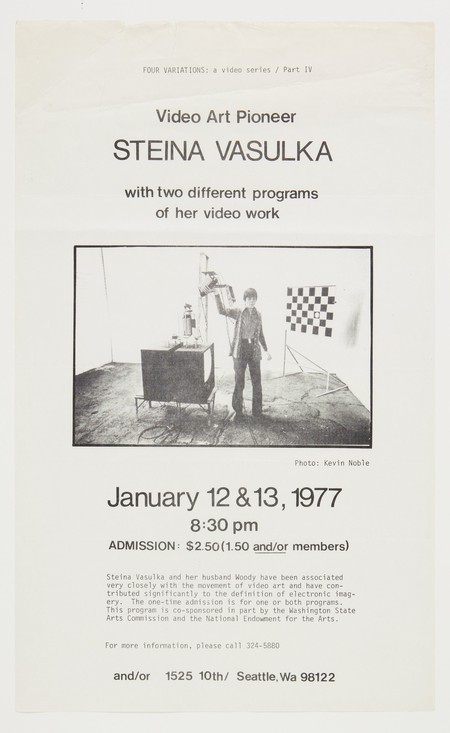 In 1971 the Vasulkas had their first public showing of video work at Max’s Kansas City, a music venue and restaurant in New York City. Later that year they opened The Kitchen in the former Broadway Central Hotel on Mercer Street. The Kitchen became a multi-media arts center which exhibited mostly video, electronic media performance, and music, as well as holding a space for new media artists to experiment with sound and images. It would be a place where artists such as Vito Acconci, Joan Jonas and Bill Viola would exhibit their first works. The context of the exhibition space allowed them to develop a spatial language within their work and to explore video in a variety of contexts. Their goal was to hold an open and informal experimental space for situations to occur that didn’t involve formal curating on the Vasulkas’ part. Electronic musician Rhys Chatham became the music director and would invite experimental musicians such as LaMonte Young, Tony Conrad, and Alvin Lucier. Their first piece from this era called Participation (1969-1971) is a documentary style, wide footage exploration of their surroundings in New York, including a Jimi Hendrix concert and a street performance by Don Cherry. 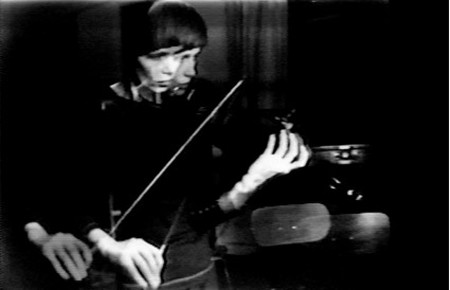 The Vasulkas moved to Buffalo, New York in 1973 to teach a video workshop at the newly opened Center for Media Study, the first of its kind in the United States. The workshop’s aim was to get people to participate in all manifestations of media in the hopes that participants would continue spreading the knowledge and start media study units of their own in the principle of a distribution network. Steina and Woody would eventually take teaching positions at the State University of New York at Buffalo. The artistic and intellectual atmosphere in Buffalo at this time was ripe for dialogue about new directions in video, film, and music composition and would later be known as the Buffalo Avante-Garde. 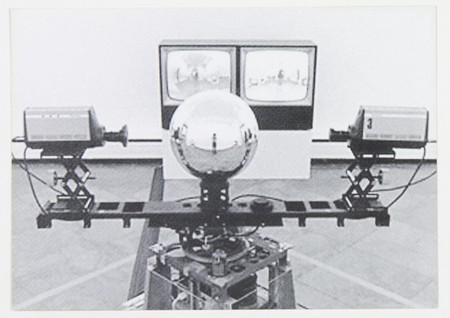 Later during their time in Buffalo in an exhibition at the Albright-Knox Gallery, Steina presented her video installations All Vision (1976) and Machine Vision (1978) in 1978. Machine Vision is composed of multiple video installations that revolve around All Vision, an installation composed of a spherical mirror, two cameras, and two monitors to represent an intelligent vision that was not completely human. The installation signifies at once the act of seeing as well as the source of the image while taking place in a cyclical mechanized rotation.

Also in the exhibition were Woody’s Descriptions,which comes from his interest in revealing the underlying visual language of code variations that create the image. Through collections of his own photographs of the cathode ray tube which he made to better his own understanding of his craft, Descriptions presents eight tableaus showing the broad visual language available and the possibilities of generating images without the “pinhole” camera principle. Together, the Vasulkas created an alternative experience of organizing perception. 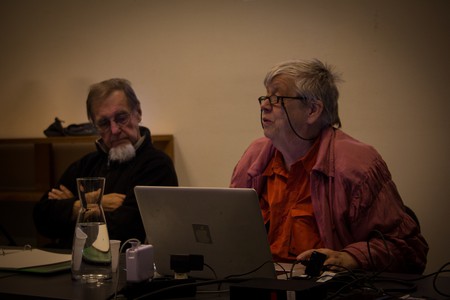 Most recently, a collection of the Vasulkas’ work has been established in Reykjavik, Iceland in collaboration with the artists. Under the direction of the video artist, Kristin Scheving, the Vasulka Chamber, within the National Gallery of Iceland, runs an archive of the works of the Vasulkas as well as an experimental workspace for visiting media artists and researchers. The Vasulkas are in the process of donating all of the contents of their studio archive in Santa Fa, New Mexico to the museum, including private photographs, posters, letters, books, notes, sketches, equipment, and video work. It is the aim of the establishment to become a source of historical knowledge for new generations of video and new media artists, as well as to become the first center for electronic art of its kind in Iceland. If you are visiting Reykjavik, don’t miss a chance to see this archive devoted to the pioneers of video art.

The Vasulkas are also represented by their first gallery ever, BERG Contemporary in Reykjavik. The gallery is exhibiting older and newer video works by the Vasulkas and some never seen before works.