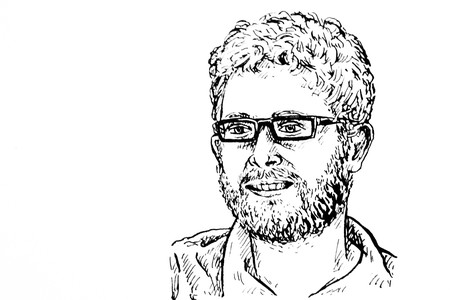 As part of our “20 Literary Translators Under 40” series, we interviewed Icelandic language literary translator, poet, and academic Lytton Smith.

Extracurricular: Poet, publications include: While You Were Approaching the Spectacle But Before You Were Transformed by It; The All-Purpose Magical Tent

Read: a short story by Þórarinn Eldjárn, entitled “The Sound Words Have.”

What are you currently translating?
I’ve just submitted Tómas Jónsson’s Icelandic modernist classic Bestseller to Open Letter; published in 1967, it’s sometimes dubbed the Icelandic Ulysses, and marked a sea-change in the Icelandic novel, away from romantic notions of the rural, national self and towards a grittier realism. It’s very meta-textual, very stream of consciousness, and very timely. And I’m working on two books: Bragi Ólafsson‘s latest, Narrator, a situation comedy in which a guy sees and old nemesis from years back in the street, and starts following him around, making prank calls to him, and getting caught up in events he wouldn’t normally; Ófeigur Sigurðsson‘s novel Öræfi: The Wastelands, which is set in the Icelandic highlands, a region which is literally a kind of wasteland, and which opens with the finding of the possessions of a man who disappeared while on a glacial hike; among these possessions is a letter to the novel’s narrator, with whom he once shared a bus ride. It’s a really interesting novel of Icelandic geography and geology. Like Bestseller, it’s some 400-pages long.

What approach or procedures do you take when translating?
I try to do two things at once: first, to try to make my translation offer an equivalent experience in English as it does in Icelandic, so the reader’s having similar emotional reactions. That means we have to change things, sometimes: in the first novel I translated, by Bragi, I used the phrase “and his cheerleaders.” it’s utterly un-Icelandic, but it matched the tone of the Icelandic, and Bragi made a point of saying he liked it. But that bring up the second thing I’m trying to do: to make sure the reader is at times aware they’re reading a translation. I want the novels to read smoothly, or as smoothly as the originals do (Bestseller is difficult in Icelandic; it’s not right to ease that for Anglophone readers), but I don’t want them to forget their Icelandic quality. I’ve had authors suggest finding matching American alternatives for cultural references, and I resist that: I’d like to see readers have to discover something like Þykkmjólk, an Icelandic milk-yogurt drink that has no translation, or to find themselves encountering the Danish version of Donald Duck in the hands of an Icelandic teenager, as happened in The Indian, the autobiographical novel by Jón Gnarr I translated recently. These two goals are sometimes pulling against one another, but that’s fine: I see translation not as a finished process but something more kinetic and on-going, translating, -ing – I love facing-text editions, but even when that’s not possible (it’s better for poetry than novels) I like the idea that the translation I’m putting in front of the reader is part of a process of going forward, whether to look up Icelandic references or even to learn a bit of Icelandic.

What kinds of works or regions do you gravitate toward?
Icelandic, mainly, though I am tempted to branch out to Sweden, Norway and the Faroe Islands. But there are not many Icelandic translators, and many, many, many wonderful books that deserve translating. I wish I could do more of them. And read more of them, too. I love the way Icelandic writing is so interested in how people interact with one another, and what happens when normal expectations aren’t met: a girl has to make friends with a soldier who’s killed everyone she knows, as in Kristín Ómarsdóttir’s Children in Reindeer Woods, for instance.

Who or what are some untranslated writers or works that you would like to see in English? Why?
Sigrún Pálsdóttir. She’s a historian and novelist; her second book of history is a creative nonfiction book about an Icelandic family, her relatives, who decide to sail to the U.S. to study medicine during World War II — and the tragic way they get caught up in the events of the war, at the last minute (almost literally). It’s an unusual angle on the U.S., as well as a wonderful, if sad, family story; it should have been bought up by a publisher by now. And I’m really excited to read her new novel, which I’ve been dipping into, and looks fantastic.

What are some of the more interesting literary developments happening in the language or region you translate from?
Icelandic writers are very good at using their writing, especially their fiction, as commentary on current events, and because of the tourism industry and the financial crashes and the political scandals over there recently, they’ve produced a lot of what that allows us to imaginatively engage with issues that are operating more broadly. At the same time, these writers are very influenced by world traditions of literature: you can see how Latin American, continental European, and U.S. novels lie behind works that are otherwise quintessentially Icelandic. And so I think that means there’s a lot we can learn from what they have to say, especially at a moment when isolationism and nationalism are being rather unthinkingly advocated. Without getting too political, it’s hard to see a country whose national novel has long been Moby-Dick, a novel which emerges from international conversations in literature, want to put up the shutters. Icelandic literature isn’t necessarily engaging with America—though they’re very interested in what’s happening here; I got to Icelandic just after the publication of Ben Lerner’s The Hatred of Poetry, and people were asking me about it—but the events that it engages with matter to what we’re going through, give us new angles on it. And then there’s also a fascinating thing about rooms and houses in Icelandic fiction: people are always getting stuck in a room, or can’t get into a room, and I think that says something about interaction between people and space that are quite different from American and (to take my original country) British concerns.

What is a recent translation challenge you faced?
The whole of Bestseller! There’s also Guðbergur Bergsson who is so subtle and erudite and whip-smart that I was constantly unearthing references that I had to try to fit into English: a sly allusion to a lesser-known Icelandic erotic saga (they do exist) as a way to make a double entendre within the Icelandic narrative. And the fact that he doesn’t punctuate, largely, so it’s hard to tell where a sentence starts and ends. But while that might seem a syntax issue, it’s actually a translation one: different languages use the same punctuation marks differently (I seem to recall the Greek semi-colon is closer to our colon) and so we aren’t just translating words, we’re translating rhythms, pauses, and so on. (Also, it’s lovely that often we can’t write a phrase without moving across languages, like double entendre above, and Icelandic does that well: it’s common to find more than Icelandic in a book, without it seeming like a radical move.)