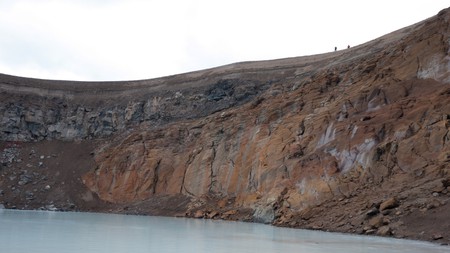 It is a well-known fact that Iceland, although a tiny island, holds vast landscapes full of stunning visual treasures to experience. These landscapes are also notoriously treacherous and some planning is needed in order to reach a few of these off-the-path places. Reaching them, however, is worth all the effort and planning, so check out our list.

This waterfall is often overlooked as it is such a short distance from the famous Seljalandsfoss on the main Ring Road. Gljúfrafoss is hidden by the rock face into which the waterfall has made a moss-carved chamber room with a small pool. To reach the waterfall, you enter through a thin opening in the outer cliff wall. A winding trail with a wooden staircase allows hikers to see the falls from a variety of perspectives.

The second-highest waterfall in Iceland with a cascade of 198 metres, Glymur is a majestic site on par with other must-see waterfalls in Iceland. Tucked into the crevices of Hvalfjörður fjord, about an hour’s drive from Reykjavík, this waterfall and the inner reaches of this fjord are often bypassed after a tunnel was built under the fjord. The hike to Glymur can take up to four hours and is an experience in itself – you walk through caves along the mossy canyon that offers a variety of angles from which to view this hidden waterfall. 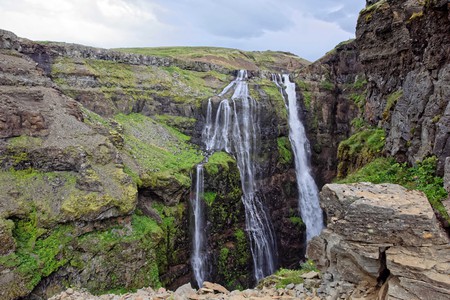 Located within the Þjórsárdalur valley are many gorgeous canyons containing waterfalls that are often overlooked because of their off-the-main-track location. Inside the Gjáin Canyon is the beautiful Gjárfoss Waterfall. Also in the surrounding area are lava caves, pseudocraters and springs forming in the lava. The hike from the settlement area at Stöng is about two kilometres long and some rocks that have to be traversed to enter and exit the canyon.

The Kjölur area takes up an area of about 600 metres to 700 metres and is situated between the Langjökull glacier to the west and Hofsjökull glacier to the east. The glacial Hvítá River is to the south and Seydisa River to the north. This barren landscape is closed during the winter season, except for all-terrain vehicles, as the conditions can be extreme. One can see remnants of the Ice Age with grey moraines and low mountains circling the otherwise plateau landscape. There are several huts on the way that belongs to the Icelandic Touring Association if you choose to hike the road.

Travel by road no. 570 in Arnarstapi and head towards the Snæfellsjökull glacier. This narrow, winding gravel road is only a few kilometres long and takes you to a small parking place with a sign for Söngvellir, or Singing Caves. After a short walk, you will arrive at the cave entrance marked with another sign. From here, however, you have to crawl on your hands and knees to enter the cave. It is quite small but well worth the effort as you get to hear the echoes of your own voice on the smooth walls.

Fjaðrárgljúfur is a massive canyon, about 100 metres deep and two kilometres long. With its sheer walls and serpentine path through the gorge, this site gets more spectacular the further into it you hike. Although the river is fairly low, there are some places that will require you to wade through it. Deep into the canyon are hidden waterfalls. You can choose to either walk along the canyon floor or along the narrow path on the canyon’s edge that snakes along the steep walls.

Located within the Central Highlands (which require quite some effort to explore, or at least an all-wheel-drive vehicle, and only in the summer months when the road is open), the Holuhraun lava field is the youngest of Iceland’s many lava fields. Holuhraun was formed during the eruption in 2015. Overall, the eruption produced 85 square kilometres of a lava field, one of the largest in Iceland’s geological history. Visiting the new lava field requires driving on off-road tracks and across rivers. One of the most popular ways to get here is to drive on the mountain road F88 from the Ring Road nr. 1, a few kilometres east of Myvatn.

Víti is a lake situated next to the larger Lake Öskjuvatn in a huge crater (50 square kilometres) in the Central Highlands. The crater was formed during a prehistoric eruption, yet Víti itself was formed during a 1875 eruption. Víti’s colour ranges from milky green to pearly blue, and it can be bathed in after you transverse the steep descent to its shores. However, caution should be taken when bathing in it, as parts are still boiling and carbon dioxide can collect on the surface on a windless day. You can also enjoy the otherworldly visual of the lake from the side rims.

This 12-metre-high waterfall is framed by black columnar basalt. Located inside Vatnajökull National Park, Svartifoss is reachable via a short hike from the visitor’s centre. You can get remarkably close to this unique waterfall, which is one of the smaller ones to be found in Iceland.

Ásbyrgi Canyon, which means shelter of the gods, is located close to Húsavik in North Iceland – another beautiful, remote setting from where you can gaze at the dancing Aurora. With 100-metre-high cliffsides and a woodland forest of ash, birch and willow, enjoy a full immersion in the landscape, both cosmic and earthly. The long hike into the canyon is well worth it. 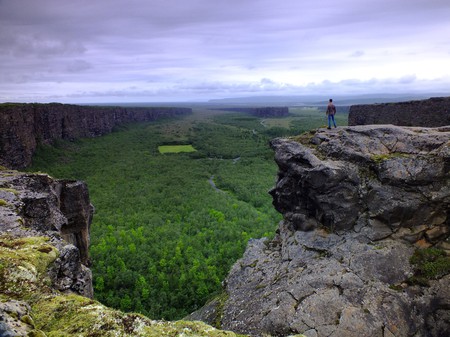 Considered the Icelandic National Mountain, and sometimes the Queen, this flat-topped mountain in the Central Highlands is the sole figure rising from the surrounding desert. To reach this remote mountain, you must take an all-terrain vehicle down the rough roads that are open only during the summer, book a night at the camping huts at Dreki and then take an hour-long hike to the base of this stunning beauty.