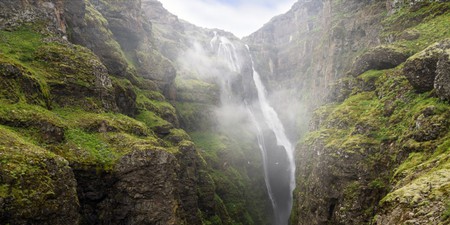 Iceland is well-known in traveler’s guides for its epic landscape features and monuments. Many of these are the first things travelers head towards on their first visit. Gullfoss, Geysir, and Þingvellir, for example, are well worth a visit; however, here are 10 amazing places that are a little less known, off to the side, or hidden gems lost amidst the main attractions.

Natural Feature
Facebook
Email
Twitter
Pinterest
Copy link
Share
Map View
The second-highest waterfall in Iceland with a cascade of 198 meters, Glymur is a majestic site on par with other numerous must-see waterfalls to be found in Iceland. Tucked into the crevices of Hvalfjörður fjord about an hour drive from Reykjavík, this waterfall and the inner reaches of this fjord are often bypassed after a tunnel was built under the fjord. The hike to Glymur can take up to four hours total and is an experience in itself as you walk through caves along the mossy canyon offering a variety of angles from which to view this hidden waterfall.
Open In Google Maps
Iceland
Give us feedback

Bókin (The Book) may be the closest thing you will find to an actual book cave. Located in downtown Reykjavík, you may not recognize it as a bookstore at first, or even a shop open for business for that matter. One of the last independent bookstores in Iceland, this odd collection contains a little bit of everything, from rare editions by Icelandic authors to cheap paperbacks. The bookstore is also famous for being a favorite hang-out of the late American Grandmaster chess player, Bobby Fischer. 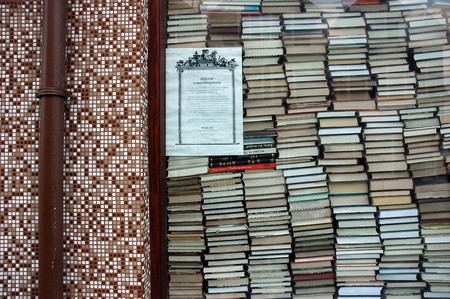 Located next to Lake Mývatn in the North, Dimmuborgir (Dark Castles in Icelandic) is a labyrinth of black lava formed into towering caves and formations. Created over 2,300 years ago by lava flowing over a marsh whose vapors pushed the lava into pillar-shapes, the resulting landscape is remarkable. Considered to be the place where the earth connects with Hell in Icelandic folklore, it is also the home of the 13 Icelandic Santas, or Yule Lads. 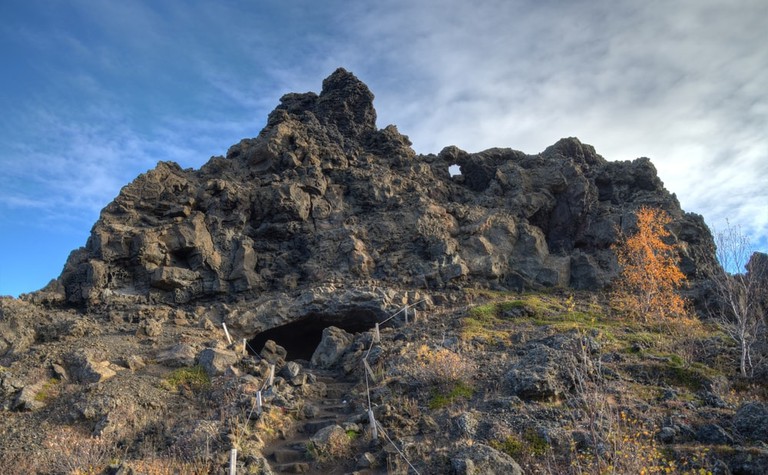 This stunning golden-red beach on Látrabjarg Peninsula in the Westfjörds is a serene setting offering vistas of Snæfellsjökull, a distant glacier to the south, on a clear day. You can walk the 20km along the beach to Látrabjarg cliffs for spectacular bird-watching and perhaps come across wildlife such as seals on the way. The sand literally appears to be glowing on a sunny day. 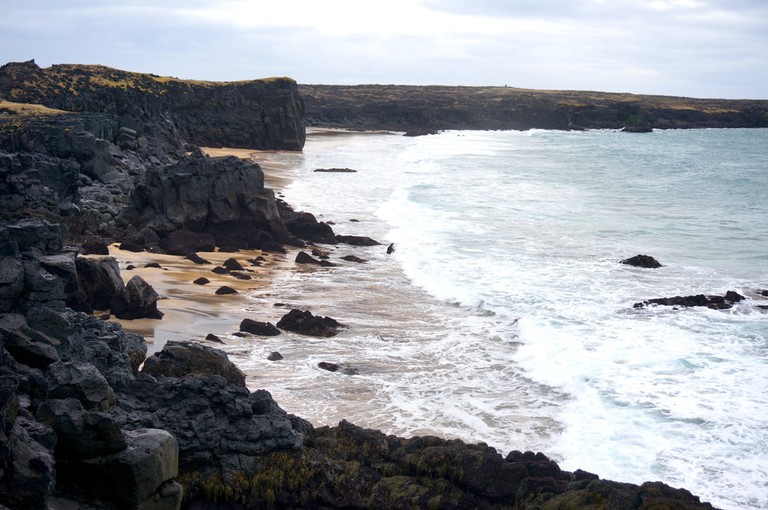 In the sparsely populated valley of Sélardalur in the Westfjörds, you can see this striking collection of sculptures and paintings by outsider artist Samúel Jónsson. The reclusive farmer turned his hands to creating artwork in the mid-1950s until he passed away in 1969. Scattered around a museum and a chapel the artist built himself, the collection is now maintained by independent and government organizations. It is only open for visitors during the summertime as the roads reaching it are impassable in winter.

This site-specific sound sculpture was designed by German artist Lukas Kühne near the artistic haven Seyðisfjörður in East Iceland. Built out of concrete, the five domes of varying sizes are interconnected and correspond to the Icelandic musical tradition of five-tone harmony. The sculpture was built in 2012 and is always open to everyone. It can be reached by a short walk from the village and offers a magnificent view of the fjörd. 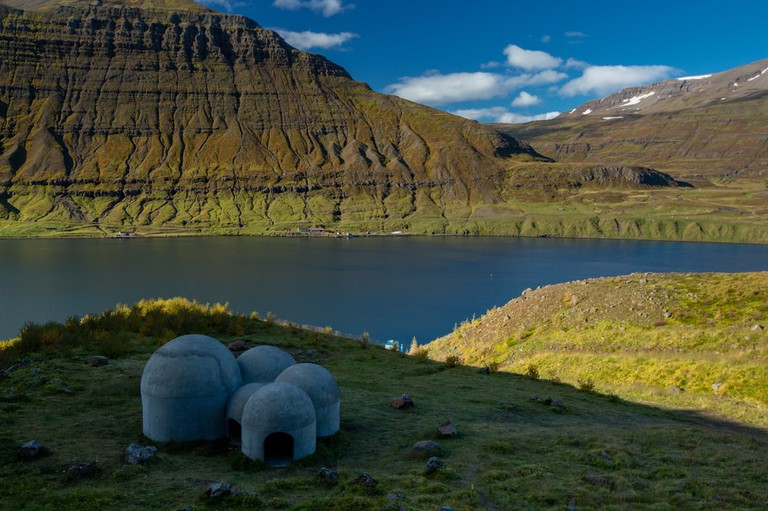 Víti is a lake situated next to the larger Lake Öskjuvatn in a huge crater (50 square km.) in the Central Highlands of Iceland. The crater was formed during a prehistoric eruption, yet Víti itself was formed during an 1875 eruption. Víti’s color ranges from milky green to pearly blue and can be bathed in after traversing the steep descent to its shores. However, caution should be taken when bathing in it, as parts are still boiling and carbon dioxide can collect on the surface on a windless day. You can also enjoy the otherworldly visual of the lake from the side-rims. 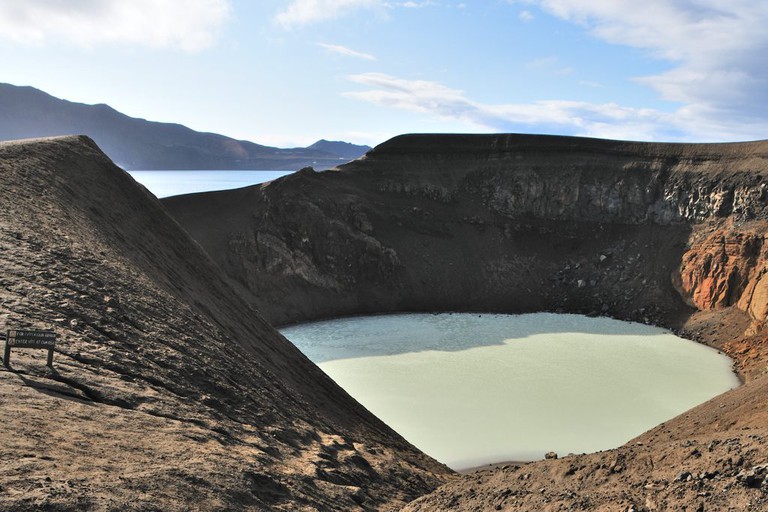 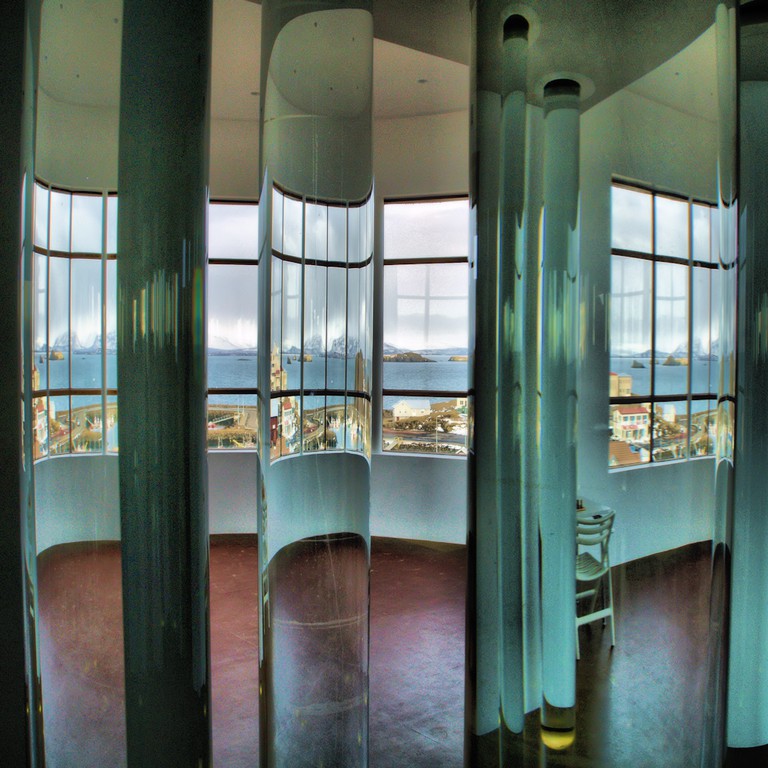 Vatnasafnið í Stykkishólmi 1 | © Atli Harðarson/Flickr
The Library of Water, installed in 2007, is located in a former library overlooking the bay of the quaint village of Stykkishólmur on Snæfellsness peninsula in west Iceland. This poetic installation by contemporary conceptual artist, Roni Horn, is one of many artworks she has made concerning Iceland. Consisting of 24 glass columns, each containing water collected from major glaciers around Iceland, the play of light through the windows onto the glass columns creates a stunning visual array that is not to be missed.
Open In Google Maps
19 Bókhlöðustígur, Stykkishólmur, Iceland
+3548654516
Give us feedback

This waterfall is often overlooked as it is such a short distance from the well-known Seljalandsfoss on the main Ring Road in Iceland. Gljúfrafoss is hidden by the rockface into which the waterfall has carved a moss-carved chamber room with a small pool. To reach the waterfall, you enter through a thin opening in the outer cliff wall. A winding trail with a wooden staircase allows hikers to see the falls from a variety of perspectives. 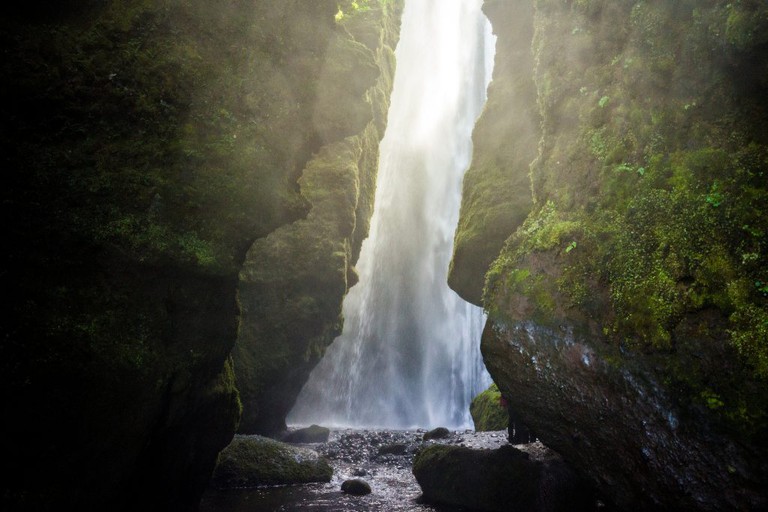 This unusual rock formation in Vatnsnes peninsula in north-west Iceland brings to mind all sorts of four-legged creatures, both mythical and zoological. Rising 15 meters above the sea, this monolith has been reinforced with a concrete foundation which is visible when the tide is low. The name Hvítserkur (white shirt in Icelandic) comes from the deposits of bird droppings which cover the rock. 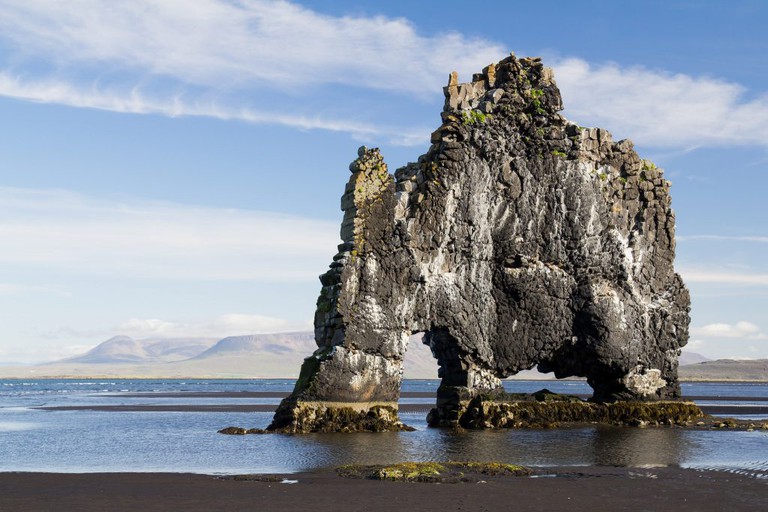