Why Dragon Boat Racing Has Taken Hungary by Storm 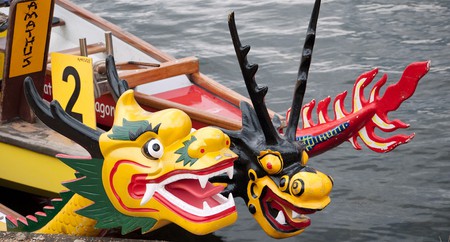 Created over 2,000 years ago, the Chinese sport of dragon boat racing has gained popularity across the world in more recent times, with countries on a global scale holding dragon boat festivals and international competitions. Join us as we take a look at the sport’s burgeoning popularity in Hungary.

An Introduction to Dragon Boat Racing

Dragon boats are, true to their name, created with inspiration from dragons themselves with a head at the front and a tail at the back. Originally, the team paddling sport of dragon boat racing was an important part of traditional folk customs in Southern China; today, it is also a popular international sport. The International Dragon Boat Federation (IDBF) is the sport’s governing body, with 62 members – including Hungary.

Seen by some as the ultimate team sport thanks to the level of teamwork and coordination required, dragon boat crews are usually made up of 22 members: ten pairs of paddlers, a drummer (at the front of the boat), and a sweep (at the rear). Larger and smaller boats allow for different crew sizes – with some boats able to accommodate over 50 team members!

The sweep steers the boat while the role of the drummer is to direct the speed with which the team paddles; this is done by beating a drum, which is mandatory in official competition events. 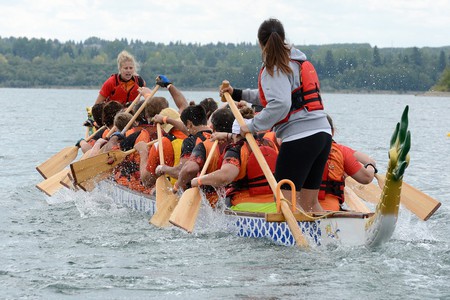 Dragon boat racing first emerged onto the international stage in Hong Kong in 1976; however, it wasn’t until 1995 that the sport was introduced to Hungary. It was in this year that a number of Hungarian sportsmen were recruited to join the German PG Mannheim kayak-canoe club, which would compete at the IV Dragon Boat Club Crew European Championships in Nottingham. The event saw the team win a number of gold medals, in turn inspiring the creation of a Hungarian dragon boat racing team.

Over the next few years, a number of important steps would be taken toward establishing a strong dragon boat racing scene in the country and, in 1998, the Hungarian Dragon Boat Federation was created. Since entering into their first World Championships, the Hungarian teams have seen an increasing level of success, taking home four gold medals at the 2006 World Championships in Prague, as well as four silver and two bronze. Given the country’s success in the sport, perhaps it is unsurprising that its popularity should also continue to grow!

2003 saw the first Hungarian Dragon Boat Championship, and the event has continued to this day, taking place in a number of locations including on the Danube in Budapest. Often held during the summer, the event is a display of sportsmanship with a festive atmosphere, and the sight of the dragon boats racing down the Danube is one not to miss.

In 2017, the 9th Dragon Boat Festival of Budapest will take place on May 13, while a number of other Hungarian Dragon Boat racing events are also scheduled to occur throughout the year, suggesting that the sport’s popularity in the country shows no signs of slowing down.