With Hungary’s general elections on the horizon, there’s naturally a lot of talk surrounding would-be candidates. While the currently elected Fidesz party remains as controversial as ever, the candidate for the county of Győr-Moson-Sopron is drawing attention for his unusual get-up.

Hungary’s current leadership, right-wing nationalist party Fidesz, has regularly made the headlines over the last few years. The party has regularly clashed with the EU, particularly with the latter’s demands over immigrants from the Middle East, while sweeping changes to the constitution have been criticised both within and without the borders of Hungary.

And yet with the Hungarian general elections coming up on April 8, it is still looking as though Fidesz will be mostly unopposed. This is the state of Hungarian politics, and it’s a large part of how József Tichy-Rács – a chicken in a suit – has come to run in the upcoming general election.

“The chicken costume came naturally,” says Tichy-Rács to The Culture Trip. “The only thing that I decided was to put on a suit as well.” The suit, it seems, adds a little more credibility and brings him in line with his peers.

“The people have lost trust in all the human politicians trying to act serious,” adds Tichy-Rács. “And here I am in the chicken costume, I’m doing the same thing as they’ve been doing and the people love me because I am a chicken, they can trust me. I am going to be a politician that the people of Sopron can trust, and I think that that’s a wonderful thing.” 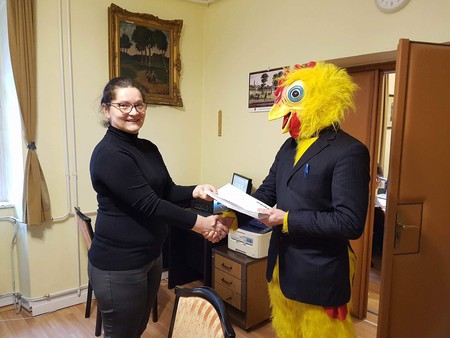 József Tichy-Rács, the politician dressed in a chicken costume | © MKKP

Tichy-Rács is running for the Győr-Moson-Sopron county as part of MKKP, the Magyar Kétfarkú Kutya Párt or, in English, the Hungarian Two-Tailed Dog Party. The group itself was founded in 2006, and grew over the years into a joke party that would seek opportunities to mock and belittle the growing right-wing nationalism of the country.

Initially they promised grand aims such as eternal life, two sunsets a day and even hoped to build a Hungarian restaurant on Mars to better improve the country’s image. It was about as frivolous as a political party could get, but the humour spread and increasingly people were taking notice.

But Tichy-Rács has his own serious promises, too: “I am supporting the small and medium families,” he says. “And I am also supporting the Hungarians living only at the border. I am also promising to make the lives of Sopron people more economically sustainable, because now they have to leave home to make extra money in Austria.”

Though the party tried to officially form in time for the 2014 elections, it was held back by resistance from the courts. “Here we are in 2018, again running for public office,” says Tichy-Rács, “and this time we actually have a chance.”

In speaking with a man in a chicken costume – who even reached for comically sized glasses when needing to read – it’s clear that the sense of humour is still embedded within the Two-Tailed Dog Party. But there’s a serious message underneath all this, as much a commentary on the state of modern politics – and the general public’s attitude towards it – as it is the need to improve the lives of Hungarians. 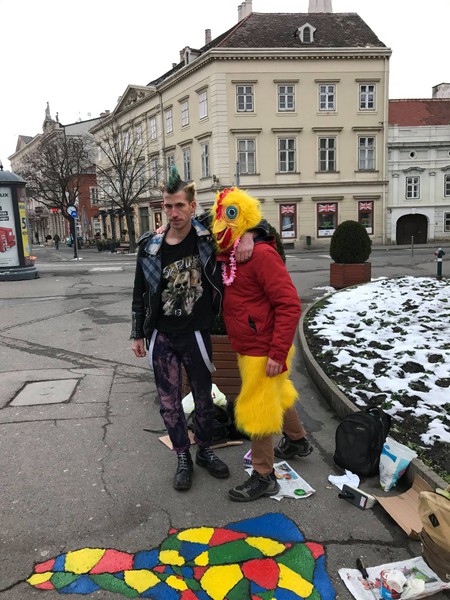 “Of course you need politicians,” admits Tichy-Rács, explaining that even public amenities – such as a park bench – is affected by politicians. “Most people go there, sit there and then after a couple of years it gets rotten and just breaks. You can go out there and maybe put a fresh wood plank on top, so that makes something that makes your life better and you wouldn’t imagine that it is politics. But it is actually.”

Of course, many of Tichy-Rács policies match the humour for which his party has become notorious, ranging from promises to take as many holidays as the rest of Hungary’s politicians to widening a stream in Sopron to allow for large boats – as much to boost the city’s economy as to allow for his own submarine for the commute to and from work.

But can MKKP make a dent in vice-like grip that Fidesz has on Hungarian voters? Despite the low numbers in early polls – hovering up to 2% of the votes – they certainly seem to think so. There’s enough underlying disapproval of Fidesz that voters are looking for a different option, for alternatives that don’t otherwise exist.

It’s interesting that he should term his competition as “serious,” but there’s a reason for that, he explains: “That’s their own definition, I don’t believe that they are serious, I’ve met a couple of them, and they were quite funny. Of course their jokes are a bit old, that’s why they need us to give that reinforcement, give them retirement or something.”

And it’s not just the younger voters that are interested in MKKP. This disillusionment is widespread throughout Hungary, the problem is there aren’t many others to side with. Can a man in a chicken suit be a worthwhile alternative? “People are struggling to get votes as humans,” suggests Tichy-Rács, “There are parties with less reach or less people willing to vote for them. I think this is the future.”