Where to Find the Best Street Art in Budapest, Hungary 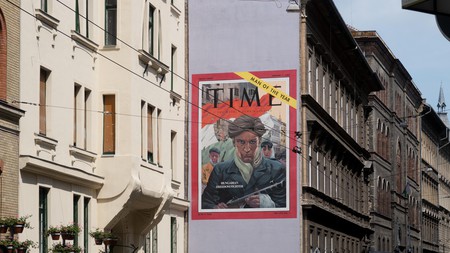 Take a walk through downtown Budapest, and you’ll notice that the Hungarian capital is a living canvas. From colourful commissioned murals to guerrilla paste-ups, discover the best street art Budapest has to offer.

Budapest is a city in constant evolution. The VII District – also known as the Jewish District – housed the walled Jewish Ghetto in 1944-45, and following WWII was largely derelict. For decades the district lay in ruin, until gentrification hit the neighbourhood in the early 2000s. As part of an initiative to brighten up the empty firewalls left behind by torn-down buildings, the city of Budapest commissioned a variety of talented artists to add a pop of colour to the district.

Although the VII District kick-started the trend of mural art, other districts soon followed and now you’ll find murals adorning once dull building walls, with groups like Neopaint Works and Színes Város making it their mission to bring colour to the city. Budapest street art goes beyond commissioned artworks, though – you’ll still find clandestine guerrilla paste-ups, stencils and elaborate tagging in places too.

The Rubik’s Cube is an iconic Hungarian invention, so it makes sense to have it immortalised on a Jewish District firewall on Dob utca 10, showing the iconic puzzle painted in 3D pointillist form. This is perhaps one of the more famous murals by Neopaint, an urban art collective who are at the forefront of Budapest’s street art scene. The artist says the piece reflects on the fact that in life “there is always a solution – not just one,” just like the Rubik’s Cube.

Motivation is a Wonderland

Spanish street artist Dan Ferrer has painted murals in cities including New York, Rome and London, and now you can find his work adorning a firewall in Budapest. The mural evokes Alice in Wonderland (1865), but with a dark undertone, as the girl sports a haunting expression and appears to be stuck inside her home. “Children need to be nurtured and motivated to reach their full potential,” says the artist, who often features children in his work. In this artwork, Alice’s strong spirit and desire to break free into the world is palpable.

As you step onto Dob utca from Károly Korut, you’ll notice a colourful, almost cubist mural sitting above a pizzeria on a firewall. It depicts a man on a surreal, brightly coloured background. The mural by Spanish artist Okuda San Miguel is dedicated to Spanish diplomat Ángel Sanz Briz, who saved as many as 5,000 Hungarian Jews from the Holocaust in 1944. The mural in the former Jewish Ghetto was supported by the Spanish embassy in Hungary to commemorate the man sometimes known as the Angel of Budapest or the Spanish Schindler.

Színes Város, whose name means Colourful City, is another art collective whose work you can see all over the city. The group worked together with the Norwegian Civil Aid Fund to curate a project that involved Budapest’s homeless population in its creation. Many submissions for its design came in from homeless artists, and the judges decided on two: a poem, ‘Wall Doodle’ by János Branyó Baranyecz and a painting by Attila Székely of a person peering through a broken wall. Szekély’s painting was appropriately titled Break Down the Walls of Prejudice.

In 2018, street art in Budapest made the headlines when a stencil of Prime Minister Viktor Orbán on a toy train appeared on a street corner. Many initially attributed it to Banksy, but it came out as a parody entitled The Real Basky (a play on Banksy’s name and a Hungarian swear word), run by the joke political party Kétfarkú Kutya Párt. Most of the Real Basky’s street art gets painted over or removed pretty quickly, but you can follow their shenanigans on Instagram, and who knows, maybe you’ll spot one in real life.

Architectural Landmark
Facebook
Email
Twitter
Pinterest
Copy link
Share
Map View
Miss KK is perhaps one of the most prevalent guerilla street artists in the Hungarian capital. You can see her paste-ups of dolls made from fashion magazine cutouts on empty storefronts, bus stops, phone boxes and elsewhere in Budapest. By day she’s a fashion designer, but by night she uses the city as her artistic canvas. “I [see] the city as a permanent, non-stop exhibition space which can be viewed by anyone. There’s a great lot of opportunities there, you just have to notice them,” she said in an interview with Budapest Flow. So take a walk around Budapest and keep a lookout for these quirky fashion dolls.

Cartoon characters from the communist era are a common theme on Budapest’s street art scene. Paste-up artist 0036Mark brings together the past and present, blending ’70s and ’80s animations with pop-culture references. “What I do as street art is both parody and nostalgia at the same time,” said 0036Mark in an interview with Budapest Flow, “elements of Hungarian pop culture or historical allusions can also be found in my work, like how DuckTales was cut short on TV when they announced the death of the first freely elected Prime Minister.” Just walk around the VII District and look out for his street art, like AntallTales, his take on the DuckTales political crossover.

Man of the Year

This striking mural by Neopaint recreates the iconic Time magazine cover depicting the civilian fighters of the 1956 Hungarian revolution. The mural – entitled Man of the Year – was originally painted to commemorate the 60th anniversary of the issue’s publication, and is a prime example of the intersection of Hungarian street art and history. It’s a piece that’s accessible for non-Hungarians, as the fight against Soviet control is a cornerstone of local history that many are familiar with. Be sure to stop by Wesselényi utca 60 to pay tribute to the freedom fighters now immortalised on this firewall.

The Hungarian grey, a long-horned domestic breed of cattle, forms an important part of Hungarian cuisine. This mural in the heart of the Jewish District shows the iconic Hungarian cow in a science fiction-esque, space setting. Artists Fat Heat and TransOne created the 600sq m (6,458sq ft) mural in just a month, breaking the local record, as part of the Színes Város Festival.

It’s not just the VII District that has a vibrant street art scene – the neighbouring VIII District is also a must-visit for art enthusiasts. While street art in the VII District features more Hungarian references accessible to international visitors, the VIII draws most of its influences from 1970s and ’80s pop cartoons. Színes Város took a large, empty firewall in a rundown residential area and injected a pop of colour with the little cartoon fox, Vuk, based on the classic children’s book by István Fekete. Visitors to Budapest might recognise the creature too, however, as the cartoon was released in the US under the title of The Little Fox.

To find out more about Budapest’s street art scene, check out the Budapest street art map.