The 10 Best Things To Do in Budapest in Winter 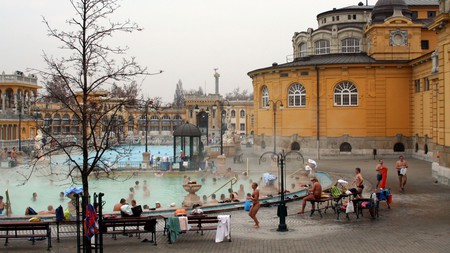 While Budapest might peak in popularity during spring and summer, winter offers the chance to see a different side to the Hungarian capital. Whether you embrace the cold on an outdoor skating rink or prefer to keep warm at the thermal baths, there’s no shortage of wintertime activities in Budapest.

Skate up a storm at the picturesque City Park Ice Rink

Just a few steps away from Budapest’s iconic Heroes’ Square lies the city’s foremost winter attraction: the City Park Ice Rink. Established in 1870, it is by far the city’s most popular ice-skating venue – not least by virtue of its fairytale-esque castle backdrop. Among Europe’s largest, the rink is open every winter from mid-to-late November until February. It offers would-be skaters an opportunity to shine and experience their own Ice Capades moment before the rink becomes a lake once again in the spring. 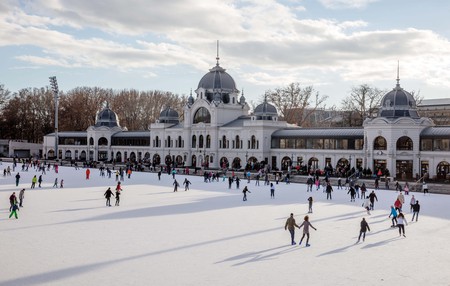 Once you’ve returned your skates and find yourself ready to rest and unwind, there’s no better place to do so than at one of Budapest’s renowned thermal baths. Luckily for you, the Neo-Baroque Széchenyi Thermal Bath is just a stone’s throw away, adjacent to the City Park Ice Rink. One of the largest thermal bath complexes in Europe, the brightly painted Széchenyi spa comprises 11 thermal water pools ranging in temperature from 28C to 40C (82-104F). You can choose to soak here for hours on end, but if you’re up for a little mental stimulation while doing so, you can also opt for a game of chess with one of the local regulars. 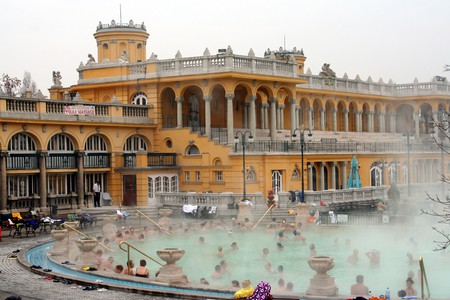 Ride on one of Budapest’s decorated vintage trams

At the top of the list of truly magical wintertime moments in Budapest is a trip on a vintage 1960s or ’70s tram bedecked in festive fairy lights, offering the chance to experience the city’s landmarks from a piece of living history. Tram 2 – also known as ‘the Christmas tram’ – for example, travels to and from Margaret Bridge and along the way passes the Neo-Gothic Hungarian Parliament Building, the Széchenyi Chain Bridge and the Central Market Hall, among other landmarks. The tram operates from the end of November until early January, taking different routes daily – be sure to consult the schedule beforehand. 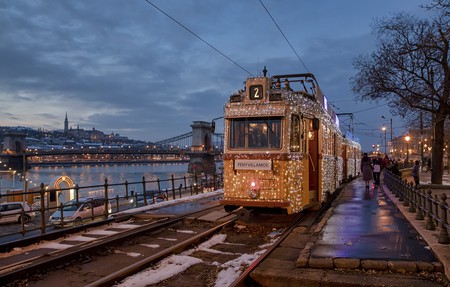 Make your merry way through a Christmas market

Christmas markets are the order of the day in many European cities during the festive season, and Budapest is no different. You’ll find vendors and artisans in their wooden stalls – selling everything from tree ornaments to scarves – scattered all over the city centre. While such markets are great pit stops for a comforting cup of mulled wine, a chimney cake or a bag of roasted chestnuts, Budapest also hosts artist-centred markets offering quirky one-off designs for sale. One such event, WAMP – which takes place several times a year (including a Christmas edition) at various locations – is a design fair that provides a platform for Hungarian designers in the fields of ceramics, fashion, accessories, jewellery, home decor and gastronomy. 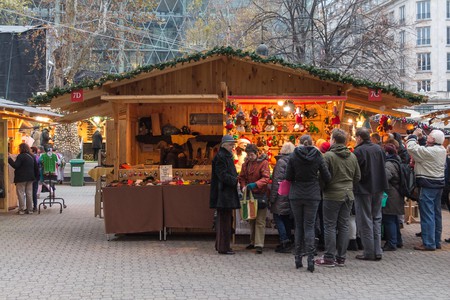 Far from the madding crowd, perched atop one of the city’s most stunning Art Deco buildings on Andrássy Avenue, is one of the city’s most picture-perfect venues for drinks: the Igloo Garden. Nine giant heated igloos offer guests cosiness and stunning 360-degree views of the city, an upscale party atmosphere and perhaps an Instagram moment or two to cherish.

The Budapest Children’s Railway is located in the west part of the city, with an 11-kilometre (6.8-mile) narrow-gauge line running through the Buda Hills. One of the most interesting peculiarities of the Children’s Railway is, as the name suggests, the fact that most of the tasks and traffic management are carried out by children between the ages of 10 and 14.

The Children’s Railway has a unique rolling stock of vehicles that cannot be found anywhere else in Hungary or abroad. While the fleet in daily service has diesel-hydraulic engines from the 1960s, the Children’s Railway operates a steam engine on weekends and public holidays (conditions permitting). In winter, the railway is open from Tuesday to Sunday, from 9am to 5pm. A one-way ride takes approximately 50 minutes. 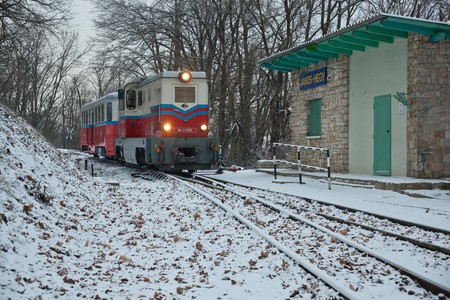 Be captivated by contemporary photography

If the cold is too much to bear and you’re feeling like taking in some local creativity, head to one of Budapest’s contemporary photography venues. Located a few metres from one another in the heart of the city, the Hungarian House of Photography (also known as Mai Manó House) and the Robert Capa Contemporary Photography Centre both offer world-class photography exhibits within stunning architectural settings. Photography enthusiasts are sure to enjoy the hours spent gazing upon the carefully curated, consistently high-quality shows on offer at both spaces.

Admire the city from atop the Elizabeth Lookout Tower

A short walk uphill from the János-hegy station on the Children’s Railway, at the highest point in Budapest, lies the Neo-Romanesque Elizabeth Lookout Tower. Built in 1910, the six-storey tower offers 360-degree views of Budapest and the surrounding hills. In the colder months, it is the perfect spot in the city for stunning snow-covered vistas. 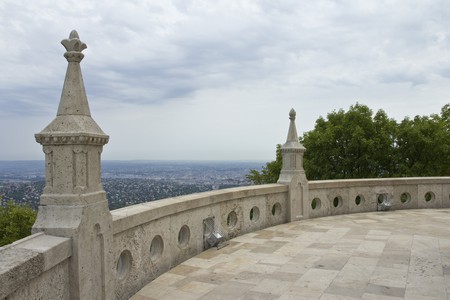 Take in some fresh air in leafy Normafa

Upon descending from the Elizabeth Lookout Tower, a walk and a slice of apple pie in the surrounding Normafa conservation area are a must. Take one of the various nature trails through the thicket and trees, and if you’re feeling sporty, ski or sledge down one of the slopes. Not feeling adventurous? No problem. You can return to the city in style via a chairlift or a quaint cogwheel railway that has been in operation since 1929.

Travel to Szentendre and marvel at its Christmas Salon

The charming artists’ village of Szentendre, just a stone’s throw from Budapest, offers a colourful getaway from the city, even in the winter months. With its winding cobbled lanes and Baroque architecture, the riverside town is as welcoming as it is picturesque. For those who wish to immerse themselves in the Yuletide spirit, Szentendre’s Hubay Ház – a space exhibiting countless Christmas ornaments of all shapes and sizes – is open all year round and is bound to soften even the most Grinch-like spirit. Each year, Szentendre also hosts a festive advent market along its main thoroughfare. 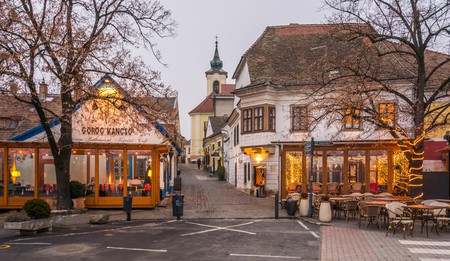 Szentendre, a small town along the Danube from Budapest, is an easy day trip option | © Stefano Valeri / Alamy Stock Photo
Give us feedback