The Best Spa Hotels to Book in Budapest, Hungary 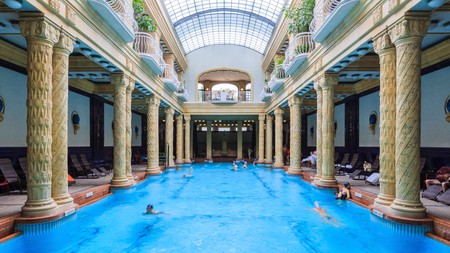 Gellert, in Budapest, is one of the city's many thermal baths worth a visit | © Sorin Colac / Alamy Stock Photo

With more than 100 thermal springs, Budapest more than deserves its nickname as the City of Spas. With a stay at the best spa hotels in the city, you can turn a your city break in the Hungarian capital into a time of relaxation and self-care.

Budapest is famed for its thermal baths, and the Széchenyi and Gellért baths are popular spots for an afternoon of indulgence. For the ultimate blissful stay, however, why not book a hotel that has a spa of its own? Enjoy thermal baths, treatments and tranquil pools at the best spa hotels in Budapest, where you can unwind after a day of exploring the city – or a big night partying in a ruin bar. 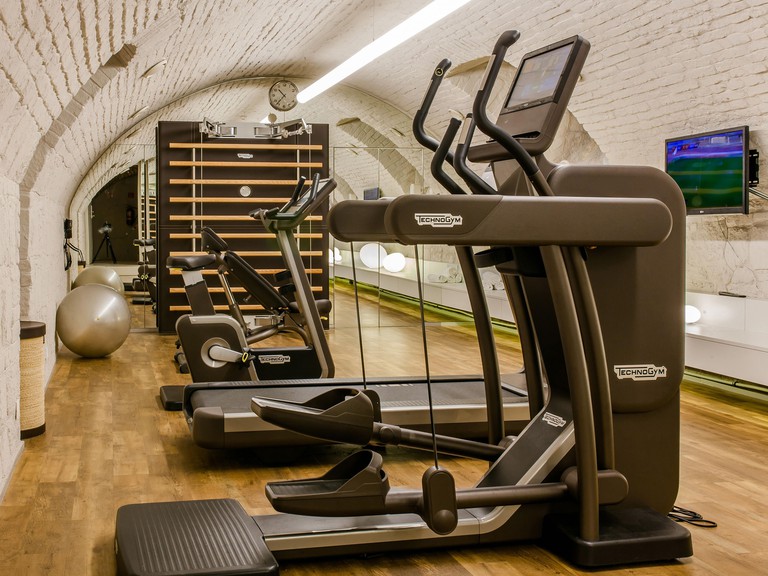 Courtesy of Casati Budapest Hotel / Expedia
The all-hours brick-vaulted gym and Finnish sauna are the icing on the cake at this boutique adults-only oasis in an 18th-century building. For the reasonable rates, it’s impressive to find a breakfast buffet featuring fresh local produce and a choice of four bedroom styles (down-to-earth Natural, airy Heaven, quirky Cool or glam Classic). Add in the on-site fitness centre and the leafy Klauzál tér square within jogging distance and there’s no reason why a trip to Budapest should leave you out of shape.

Párisi Udvar Hotel Budapest in the Unbound Collection by Hyatt 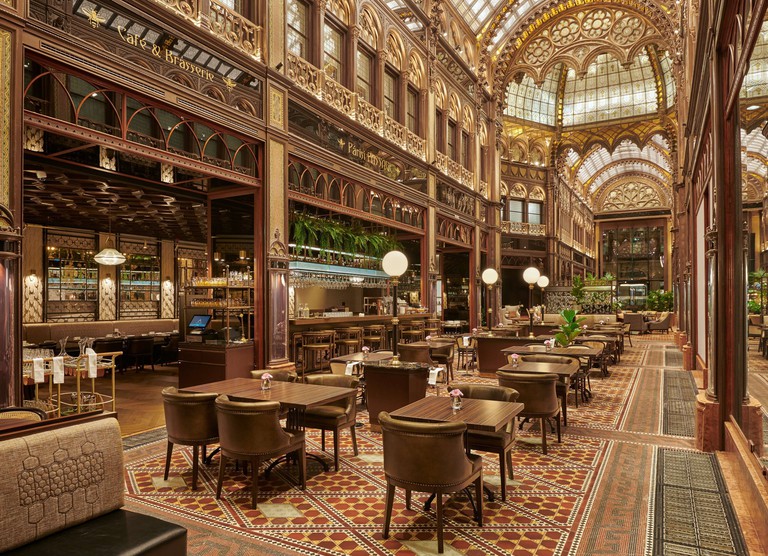 Courtesy of Párisi Udvar Hotel Budapest / Expedia
Wicker recliners and a turquoise pool are flanked by candles and pot plants in the glowing spa, just one facet of the eclectic beauty at this palatial hotel. Modelled around a posh former shopping arcade, dripping with gilded art nouveau details, domes, turrets and original ceramics, Párisi Udvar has an awe-inspiring interior. There’s a range of stylish bedrooms to suit different tastes and budgets, from the Art Collection suites – each with a marble bathroom, rainfall shower and bathtub – up to the opulent Paris Residence, with a sunset-facing terrace and a private spa. 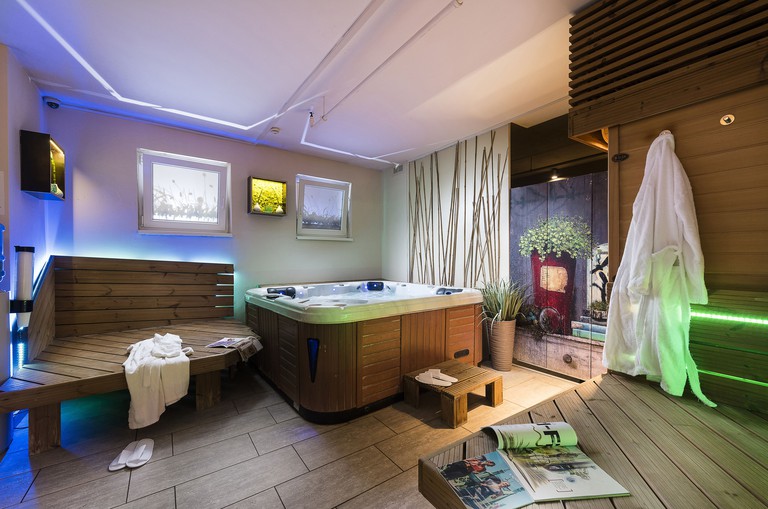 Courtesy of Bo18 Hotel Superior / Expedia
A bubbling Jacuzzi, cosy sauna and means-business fitness machines are all packed into the wellness area at Bo18. All guests can use the facilities for free and superior rooms come with a complimentary bathrobe and slippers. The historic lanes outside are made for strolling and the curving yellow Corvin Cinema is just around the corner, showing some English films with subtitles. 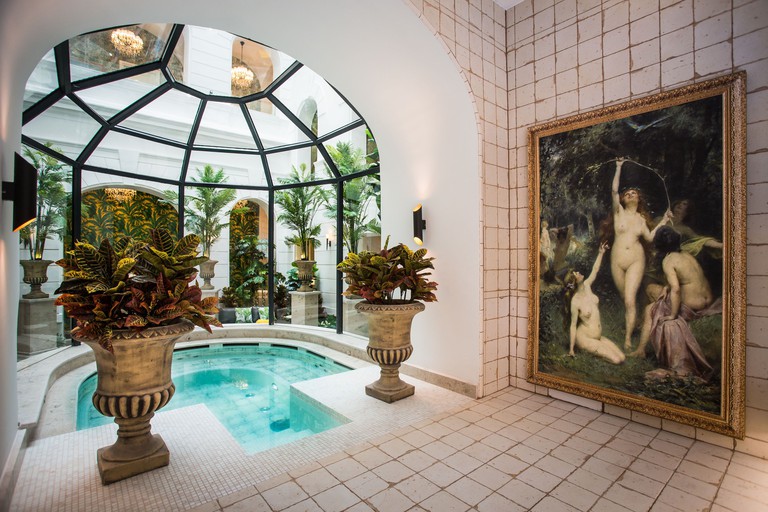 Courtesy of Mystery Hotel Budapest / Expedia
The magical decor in this lavishly converted former freemasons’ HQ doesn’t miss out the spa. Fountains, whirlpools, an ornate tiled floor, a jungle-walled gym and a glass ceiling transform this wellness area into the Secret Garden Day Spa. There’s a sauna and a steam room and you can book body treatments and massages involving Hungarian lavender or golden tokaji wine. And, if you’d rather drink it than be rubbed with it, head to the chandelier-hung Great Hall or to the romantic rooftop Sky Garden to sip late harvest grand tokaji. 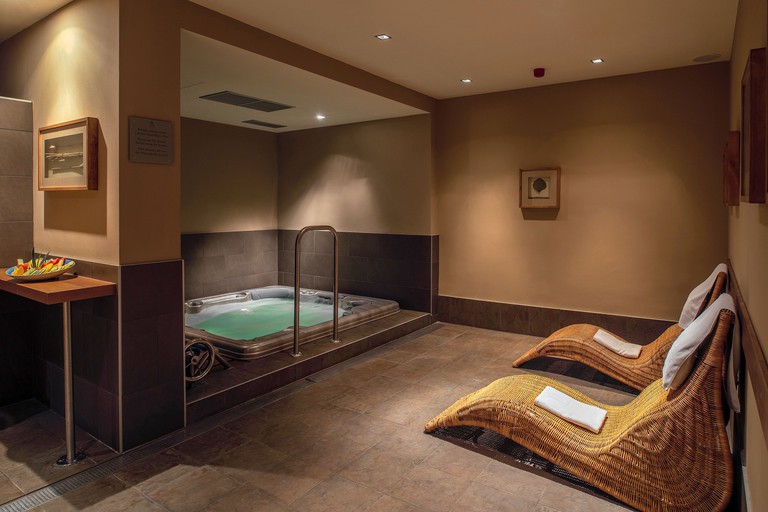 Courtesy of Hotel Castle Garden / Expedia
There’s a Jacuzzi pool and sauna in this modern block not far from the turreted Fisherman’s Bastion and you can also book a three-night Explore Budapest package, which includes a day-pass to the baroque Széchenyi Baths – one of the largest thermal bathing complexes in Europe. The packages include a candlelit dinner in the hotel’s Riso Restaurant, which has a Mediterranean-style terrace, outdoor grill, pizza oven and winter garden. 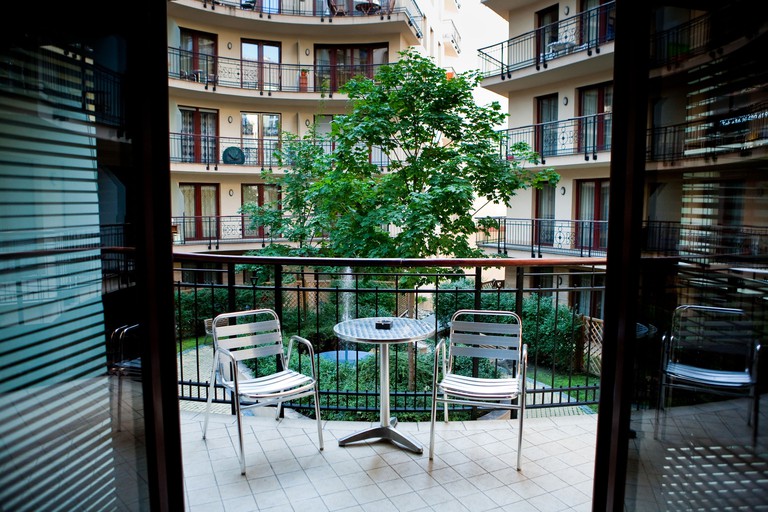 Courtesy of Town Hall Apartments / Expedia
Free coffee on arrival, luggage storage, bikes to borrow: lots of things are included at Town Hall Apartments that you might need to pay more for elsewhere and that goes for the spa, too. Included in the apartment price, there’s access to a local gym, about five minutes’ walk away, with a good-sized pool, sauna, steam room and complimentary towels (you’ll need a swimming cap). 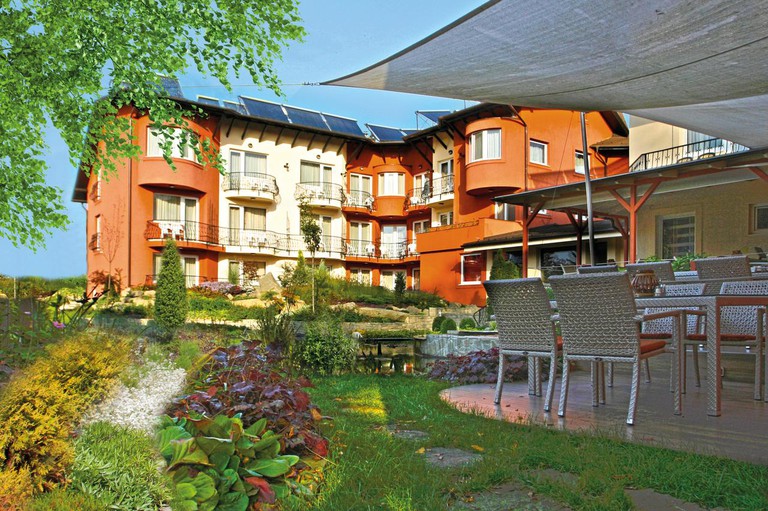 Courtesy of Szőnyi Garden Hotel Pest / Booking.com
Unlimited use of the wellness centre, which has saunas, a Jacuzzi, a gym and a salt chamber, is a bonus at the Szőnyi Garden Hotel. In an affluent, low-rise suburb, the business-facing hotel lives up to the name: the restored tree-ringed garden has lily ponds, hydrangeas and a wooden playground. In wicker chairs on the shady terrace, try Hungarian delicacies, such as catfish soup or grilled goose livers. 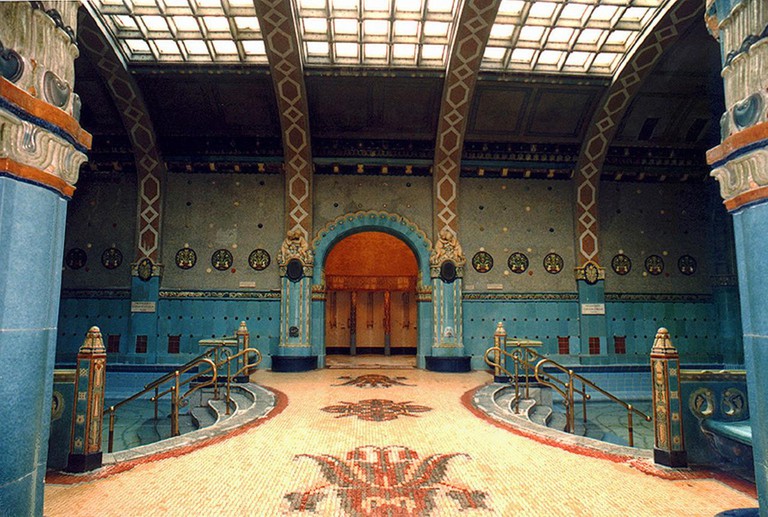 Courtesy of Danubius Hotel Gellért / Booking.com
This 100-year-old hotel, nestled between Gellért Hill and Liberty Bridge, shares its property with the eponymous thermal baths. The Danubius Hotel Gellért captures the feeling of an undefined but evocative yesteryear, with art nouveau stained glass blended with elements of socialist realism. The baths are a decadent extravaganza adorned with turquoise mosaics, colonnaded pools and an outdoor pool complex with a wave machine (dating back to the 1930s) that runs on the hour. Guests at the hotel get a generous discount to the famous thermal baths. 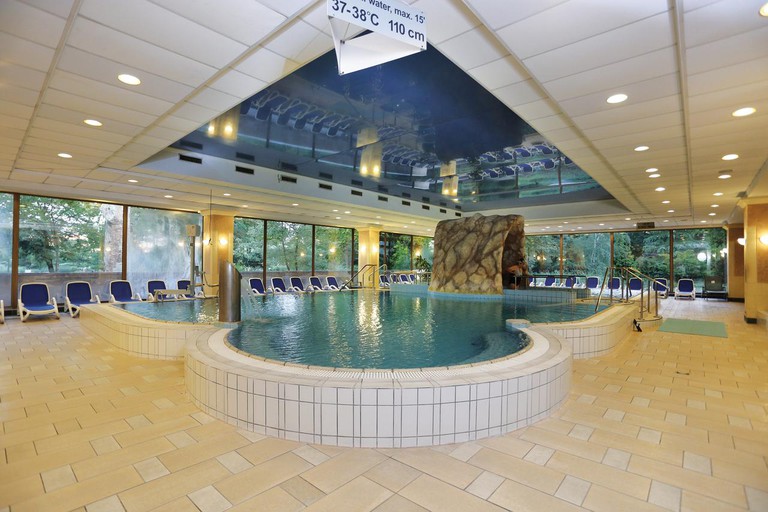 Sister hotels the Danubius Grand Hotel Margitsziget and the Danubius Health Spa Resort Margitsziget can be found on leafy Margaret Island, surrounded by the River Danube. They have a thermal bath complex that’s free for guests, with an underground corridor connecting the early 1900s Grand Hotel with the more modern Health Spa Resort. In-house doctors are on hand to prescribe various medical therapies, while a wide range of cosmetic and wellness treatments are available, including spending time in the realistic salt cave to improve respiratory and skin health. These hotels offer the best of both worlds – a city break by day and a therapeutic island getaway by night. 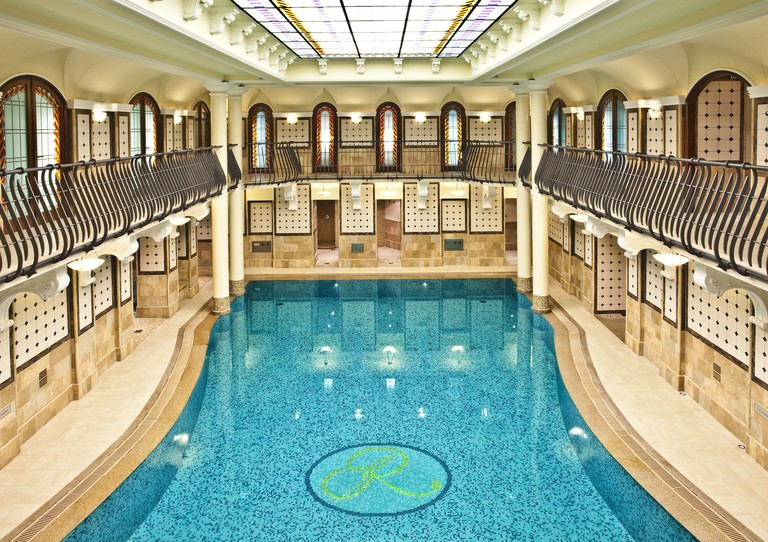 With a neoclassical facade and glass-covered atrium, the Corinthia Hotel Budapest captures the atmosphere of a grand 19th-century hotel. Perched on the majestic Grand Boulevard and dating to 1896, it is famed for a gilded ballroom and the subterranean Royal Spa, which was forgotten for decades and nearly turned into a car park. The elegant spa has a marble-clad turquoise pool sitting below an elaborate stained-glass ceiling. Here, you can indulge in massages and treatments, sweat it out in two Finnish saunas and a steam room, plunge into two whirlpool tubs and enjoy the complimentary juice bar. 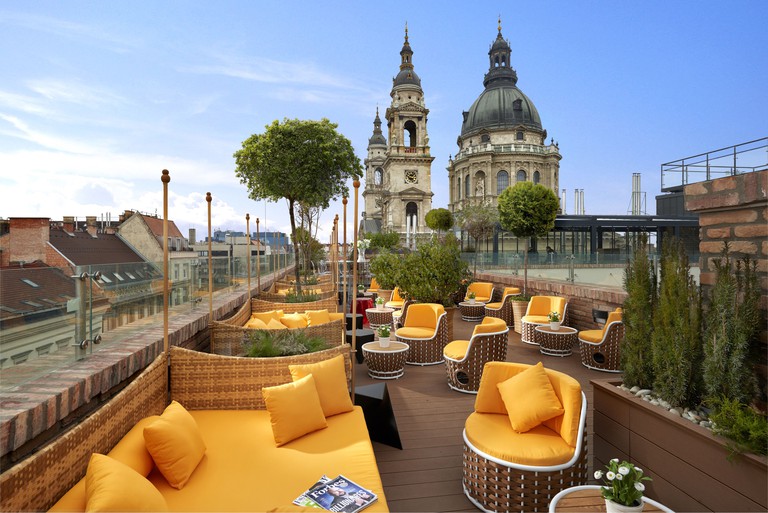 Courtesy of Aria Hotel Budapest by Library Hotel Collection / Expedia
Located at the heart of Budapest’s 5th District – the political, financial and touristic centre of the city – the Aria Hotel is set in a charming neoclassical apartment block. Inspired by music, the hotel design incorporates creativity into every detail – from the lobby floor resembling piano keys to the four distinct wings that take classical, opera, jazz and contemporary music as their themes. For early-evening drinks or a nightcap, there’s no better spot than the the rooftop High Note SkyBar, which overlooks St Stephen’s Basilica. The underground Harmony Spa allows you to ease into relaxation mode with a low-lit swimming pool decorated with mosaics of jazz musicians. Aria Hotel also has a gym, sauna and steam rooms, but to truly unwind, book one of the reviving massage treatments. 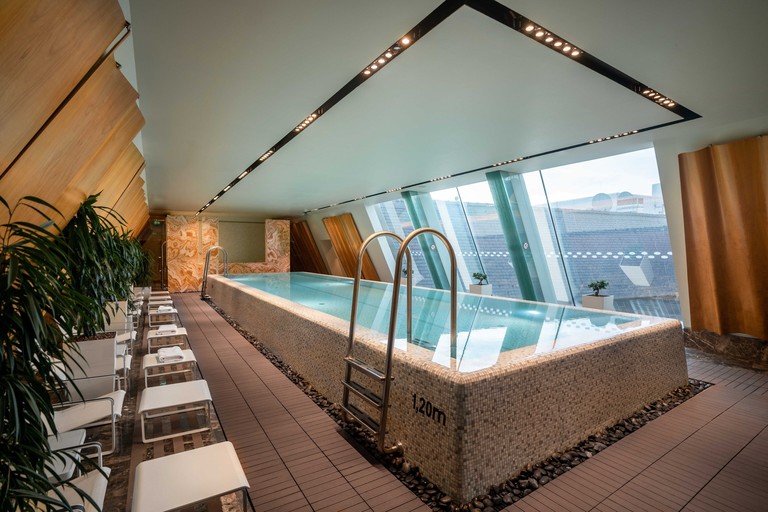 Courtesy of Four Seasons Gresham Palace / Expedia
For the ultimate luxury stay, you can’t do better than the Four Seasons. Housed in the art nouveau Gresham Palace, famed for its curved glass atrium, many of the plush magnolia- and cream-hued rooms in the Four Seasons enjoy front-row views of the famous Széchenyi Chain Bridge and Buda Castle. The light-flooded rooftop spa, with its infinity-edge pool, is the perfect place to revive yourself after a day sightseeing. However, to get the most out of your Four Seasons experience, book an exclusive treatments, such as the Hungarian Moor Mud Therapy or Blue Diamond Facial (which uses diamond peptides to give your skin a premium lift). 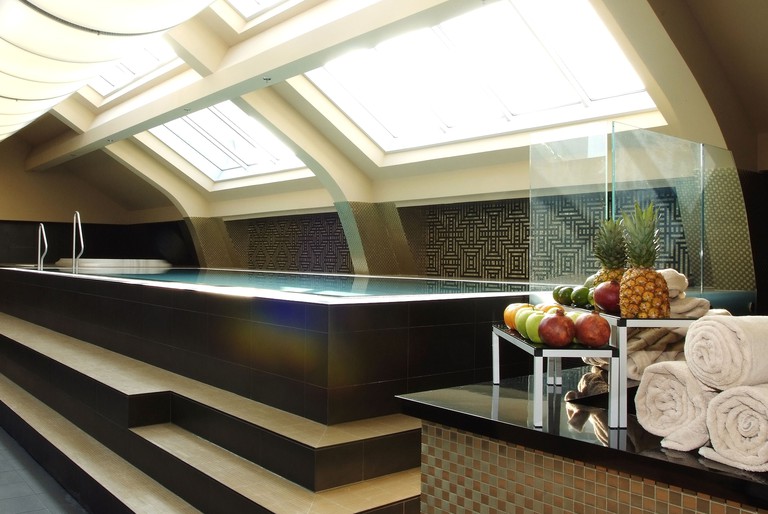 Tucked away from the crowds in the happening 7th District, the Continental Hotel Budapest occupies a former 19th-century bath complex, which was transformed into this four-star hotel in 2010. The historical spa no longer exists, but architectural highlights – notably the stunning glass-covered atrium in the hotel lobby – capture the building’s art nouveau grandeur. Today, a modern rooftop spa combines an indoor and outdoor pool with fabulous views over the city towards Buda Castle. Here, you can also treat yourself to saunas and massage treatments, before sampling refined French and Hungarian cuisine at the in-house ARAZ Restaurant. 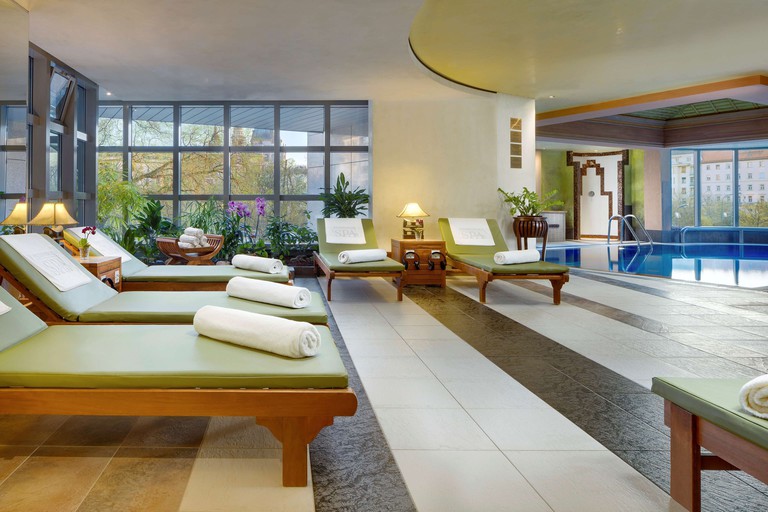 In the heart of downtown Pest, overlooking Deák Square, the Kempinski has a distinctly modern feel. In contrast to the many luxury hotels housed in 19th-century mansions in Budapest, the Kempinski is a vision in glass and marble, with its contemporary design echoed in the hotel’s extensive collection of original Hungarian paintings. Although the main selling point is the gastronomy – think Japanese-Peruvian cuisine at Nobu and Austro-Hungarian dishes at ÉS Bisztró – the lavish in-house spa has a pool, tepidarium (a room heated from the walls and floor, where you can gently warm yourself before heading to a sauna or a steam room) and pristine white-and-turquoise-tiled saunas. 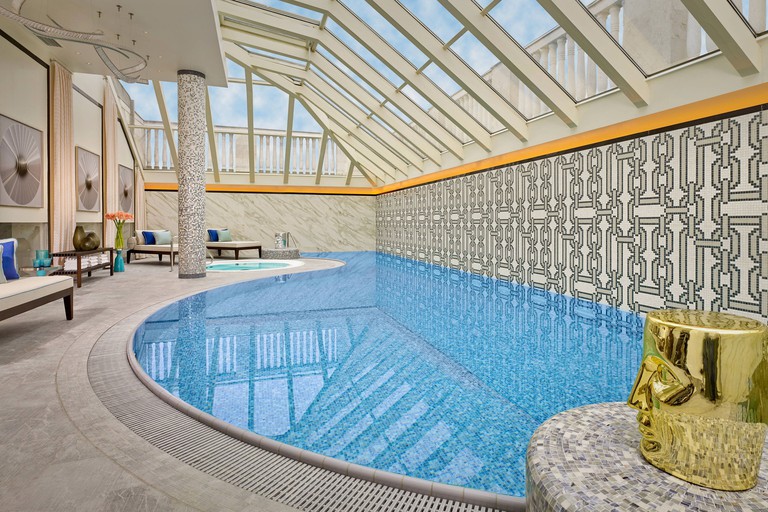 Courtesy of The Ritz-Carlton, Budapest / Expedia

In an early-20th-century building, with modern interiors that echo the shades of the Danube in hues of blue and grey, The Ritz-Carlton encapsulates Budapest’s status as a historic yet dynamic city. Just off buzzing Erzsébet Square, it has a central location while offering a tranquil refuge away from the hubbub of downtown. Whether you want to enjoy a cocktail under the calming blue stained-glass dome at the Kupola Lounge or relax in the spa’s mosaic-adorned pool, you’ll find Zen here. Head to the spa for treatments using luxurious and natural ESPA skin products. 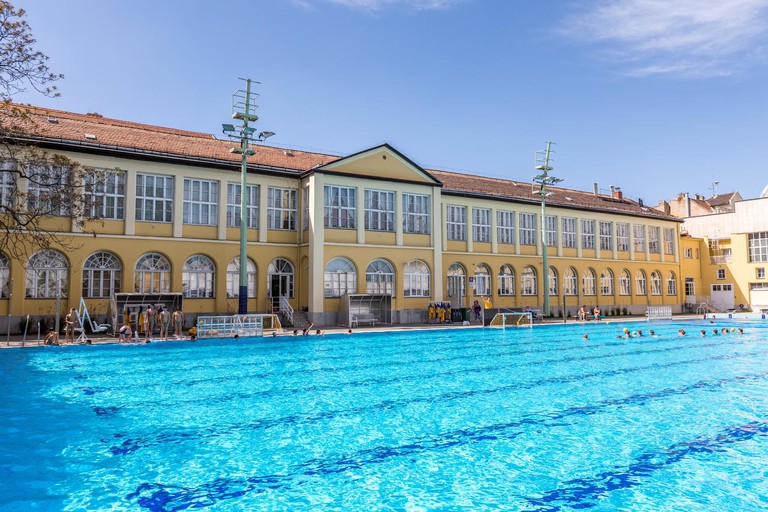 Not all spa getaways have a steep price tag. The Hotel Császár is a three-star hotel housed in a former 19th-century convent in the northern part of Buda, next to the Lukács Baths. The rooms are simple but clean and comfortable, and there is a huge open-air swimming pool on site – perfect for working off your complimentary breakfast. If Budapest’s famous 16th-century Turkish baths are on your list, this could be the hotel for you – it’s next door to the Veli Bej Thermal Bath. Dating back to 1575, this renovated Ottoman bath complex features steam rooms and five thermal pools of varying temperatures. 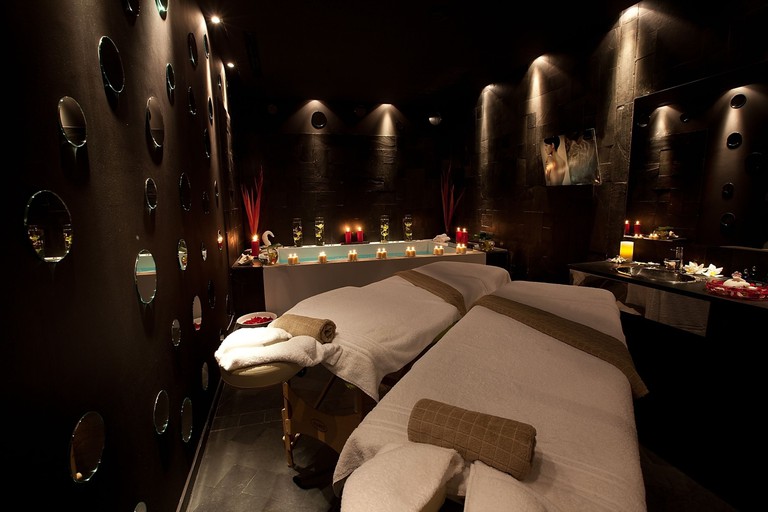 An elaborate building fusing elements of art nouveau, renaissance and baroque architecture, the New York Palace rises gracefully over the Grand Boulevard. While famous for its gilded, marble-clad New York Café, which is said to be among the most beautiful in Europe, the hotel’s wellness credentials are just as impressive. You can unwind at the spacious spa with its low-lit pool and wide selection of treatments, which include hot stone massages, facials and treatments using products by THALION – a leading authority in mineral therapies using marine products.