Coming Home: The Revival of Jewish Life in Budapest 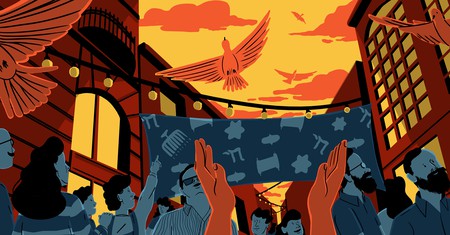 After decimation during the Holocaust and the curtailment of Jewish practice under Communist rule, today Jewish culture is flourishing in Budapest. Twenty-six-year-old Hungarian teacher Dávid Hollós explores his city’s vibrant Jewish community, while delving deeper into his own Jewish heritage and identity.

It’s a beautiful evening in the back garden of Budapest’s Israeli Cultural Institute. It’s Friday, Shabbat is about to arrive, and the young Jewish community has gathered together to celebrate the holiest day of the week. The guitarist starts playing, and it’s time to sing the first prayer of the night. Many people aren’t sure of the words, but, as the guitarist begins a more familiar song, more join in and the singing voices grow in gusto and joy. Despite challenging circumstances for Budapest’s Jewish minority – Hungarian Prime Minister Viktor Orbán has been accused of fuelling antisemitism – in 2019, Budapest’s Jewish community is undergoing a revival.

The Hungarian capital has had a Jewish presence since at least the 13th century, and its Jewish quarter is home to the largest synagogue in Europe (Dohány Street Synagogue). Thirty years after the fall of Communism in Hungary, kosher restaurants (as well as vibrant Israeli eateries such as Mazel Tov) are popping up everywhere, community events such as Judafest are drawing crowds, and Budapest has even played host to the European Maccabi Games (an Olympics-style Jewish sporting event). As a young member of Budapest’s Jewish community, I wanted to discover how Jewish life has changed in my home city over the past few decades. 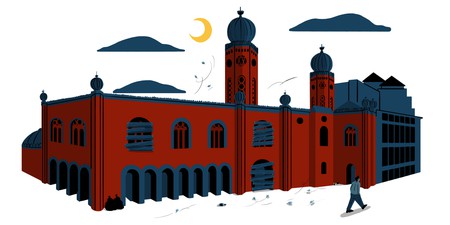 Budapest’s Jewish community suffered heavy losses during the First World War, when thousands of Jews fought and lost their lives for Hungary. The Second World War saw more than 500,000 Hungarian Jews killed in concentration or forced labour camps. In part due to difficulties reintegrating into Hungarian society following the war, many Jewish people left Hungary to settle abroad, mostly in the USA and Israel.

The years of Communism didn’t bring any relief for the remaining Jewish population, with Hungary officially an atheistic state and religious groups facing widespread persecution. Jews, for example, were prohibited from owning shops and were restricted in many areas of business; as a result, a large number of practising Jews chose to hide their religion. In the latter part of the Communist era (which came to an end in 1989), many synagogues were rarely used, and Budapest’s Jewish schools and social spaces all but disappeared.

The winds of change

In 1989, events took a big turn. Political debates, vast protests and a weakening of the Communist system made way for what Hungarians refer to as rendszerváltás (change of regime). With the new era came freedom of religion. “Towards the end of the 1980s, more and more people found their way back, as there was a tangible growing instability in the Communist system,” says Zsuzsa Fritz, director of Bálint House, the first Jewish Community Centre in Hungary.

Although the end of Communist rule offered the possibility of the revival of Jewish community life in Budapest, this was not to be an easy task. Most Jews were assimilated, lived a secular lifestyle, and didn’t know much about their Jewish heritage. 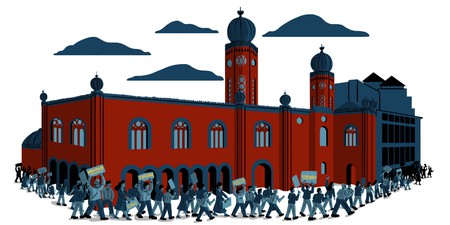 This is where Jewish humanitarian association Joint (also known as JDC) stepped in. This US-based organisation works to bring Jewish communities back to life by establishing Jewish Community Centres (JCCs). Unbeknownst to many, Joint had actually been present in Hungary during the Communist period.

“They weren’t supposed to be here officially, but they were active underground,” explains Fritz. “After the war, during Communism, the only places for Jews to meet were the synagogues. After the change of regime, the task was to create a meeting point for secular Jews where they could socialise, get to know each other and embrace their Jewish identity without actually having to take part in religious rituals.”

Bálint House wasn’t the first step in this process. “The first Hungarian Jewish summer camp for children opened in 1990, the year of the big change,” Fritz recounts. The camp was hugely popular, and has been held every summer since.

Shortly after the first camp, Bálint House opened in 1994, where Fritz has been the director since 2005. It was the first JCC to open in Eastern Europe following the Holocaust. This social centre is mostly aimed at secular Jews: “Our main goal is to teach people about their identity, about what it means to be Jewish,” Fritz says, “I believe that there are many ways to be Jewish, but to be able to decide which way is right for you, one has to know what the options are. And knowledge creates a stronger community.” 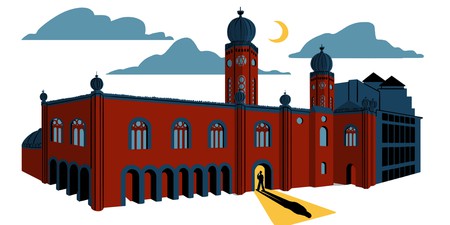 The House holds a diverse range of events, aiming to reach and educate all generations. When I was in kindergarten, we regularly visited Bálint House to learn songs and playfully act out stories from the Torah. This is also where I first met Fritz, and she taught me my first ever Hebrew song.

“For the more mature audience, we offer exhibitions and talks; for the teenagers, we have community-building activities, and leadership-training so they can find their place in the world,” Fritz explains. Bálint House also holds family events, with childcare and opportunities for parents to connect, along with gatherings for young adults. “Besides our own events, we work together with some university organisations, like Hillel Hungary,” says Fritz, referencing the US-based organisation behind the Shabbat meal that saw us gathered in the Israeli Cultural Institute’s garden. Their goal is very similar to Bálint House – to bring together Jewish young adults in a non-religious context. “To be honest, I’m not very religious,” says Dani, a 22-year old student at the Shabbat dinner. “I come here to make friends and maybe to find a girlfriend. It’s good to belong to a community.” 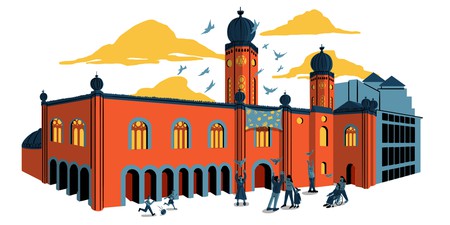 István Darvas is the rabbi of the synagogue at the Budapest University of Jewish Studies. I first met him when my family was looking for a Jewish community to be part of; we were immediately struck by his humour and ability to apply biblical teachings to modern life. “I don’t think we need to change traditions. It’s better to show how these old texts can still be relevant today,” says Rabbi Darvas, who sends a ‘Daily Torah’ email to his congregants.

“Budapest offers a lot of opportunities to the Jewish community,” he says. “There are outstanding kosher restaurants, festivals, and there is even a Jewish football team. We have Jewish kindergartens, schools and the university, and a Jewish hospital, too. There are many synagogues for all branches of Judaism, whether you are conservative or belong to the reform movement. Here everyone can live their own Jewish life as they prefer.”

Beyond religious services, the synagogue organises an array of social events. “We often watch the football together, we go on trips, we cook,” Rabbi Darvas notes, adding that the synagogue is open to everyone: “Our doors are always open, all visitors are welcome. We also have a free open university to anyone interested in Jewish culture.”

He believes this openness fosters a strong, diverse community, where people can feel a sense of belonging. “The synagogue involves all kinds of people,” says the rabbi. “What matters is that all of them come home to the synagogue.”