Gellért Spa, the Most Beautiful Spa in Budapest 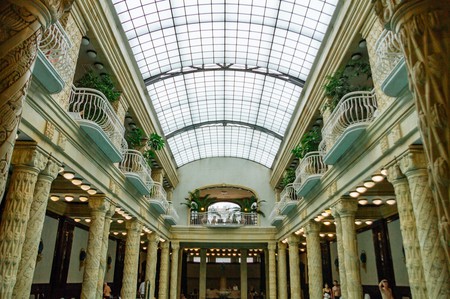 While it’s the Széchenyi Baths that are typically the number one spot for tourists in Budapest, Gellért Baths – located on the Buda side and sitting beside the hill of the same name – is often preferred for its Art Nouveau beauty and more serene environments. 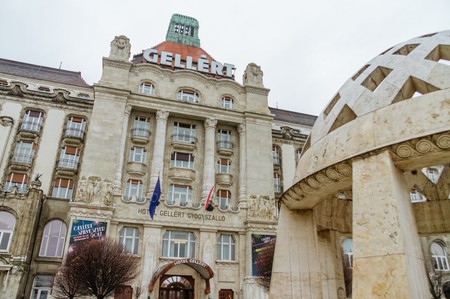 What is the history of Gellért Baths?

While Gellért might not be the oldest spa in Budapest, the thermal waters from which its baths are sourced have been used since the 13th century. Hungarian King Andrew II built a small hospital by the hot springs to provide a way to heal and clean those in need. 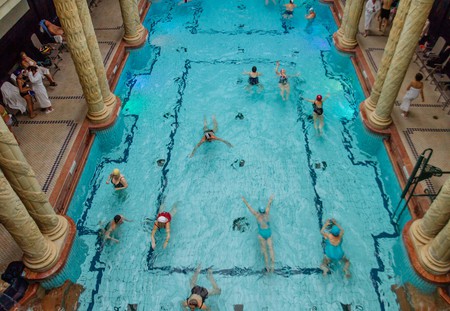 These thermal waters were used for centuries by Hungarian monks, hermits, and knights and soldiers of various religious orders.

It wasn’t until the 16th century, when the Ottomans invaded Hungary and captured Buda Castle, that a more permanent structure was built. This Turkish bath was the original foundation for what would become the modern-day Gellért Baths. 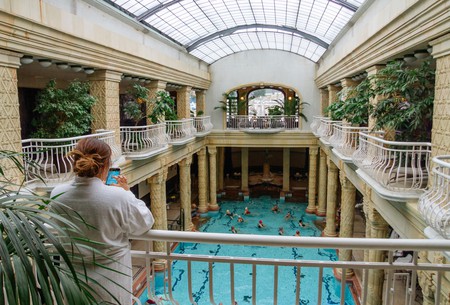 It wasn’t until the year 1686, when Buda was recaptured, that the structure would end up once again in Hungarian hands.

In the years that followed, the new structure would adopt a new name, Sárosfürdő, meaning ‘muddy bath’. This was because of the mineral mud that came with the spring waters, settling at the bottom of the baths. 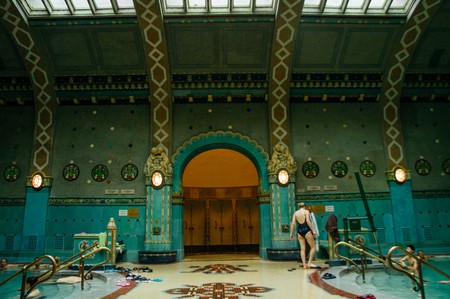 But it was at the start of the 19th century that the spa complex began to take shape, at which point more suitable buildings were constructed to create a more civilized bathing experience.

It was at the same time that the name Gellért was attached to the baths, the name coming from the 11th-century Bishop Gerard Sagredo. He was a pivotal figure in the birth of Hungary as a Christian country, the nearby hill overlooking the city also sharing his name. 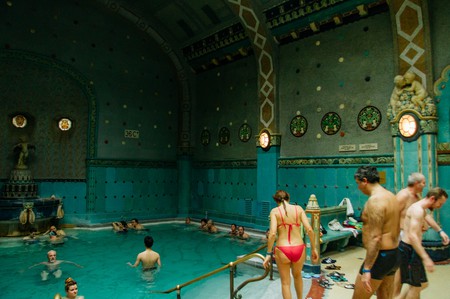 But these buildings were quickly removed, destroyed by the end of the 19th century to make way for the now-iconic green Liberty Bridge that crosses the Danube.

The building that replaced it was the same Art Nouveau construction that we see today, though it has naturally gone through many repairs and refits. 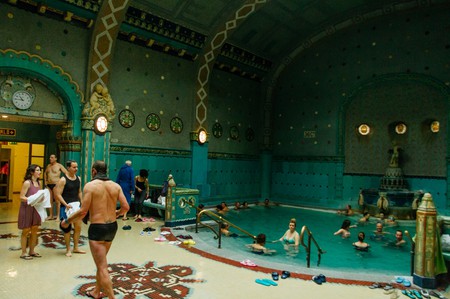 It was designed as a combination of a spa and hotel, with guests staying at Gellért having immediate access to the thermal waters.

Despite the construction being the same as it is today, many features were added over the years. In 1927, for example, the large outdoor pool was added, bringing with it artificial waves that are activated periodically to create a fun swimming experience. This was an incredibly modern concept at the time, a function that wasn’t commonly seen across Europe for decades after. 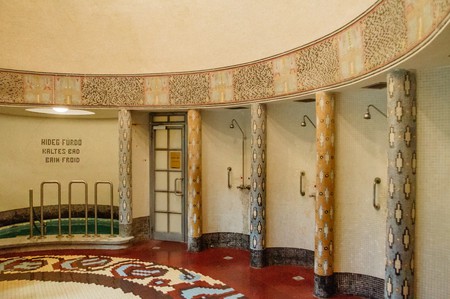 Then, in 1934, the now-iconic bubble pool was added. This is a large swimming environment that creates bubbles, sitting between gorgeous ornate pillars and lit by a huge arched window from above.

Though the complex survived much of the bombing of Budapest in World War II, the female wing of the building suffered heavy damage to the Art Nouveau façade, the changing rooms, and even the thermal bath in this part of the spa. 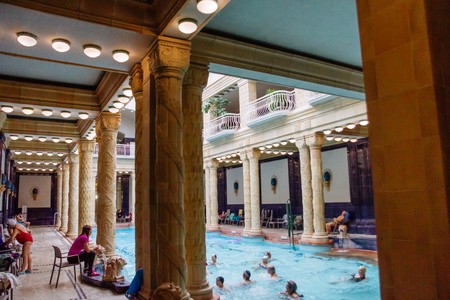 Due to Hungary’s severe economic downturn following WWII, the reparations for the women’s wing of Gellért Baths was done very cheaply, poorly representing the original grandeur of the building.

However in 2008, repairs were done to restore the beauty of the original design, the Art Nouveau aesthetic extensively reconstructed to return the building to its former glory. 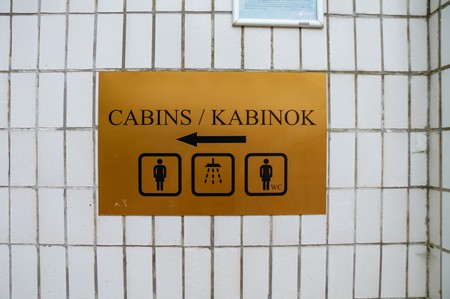 Over the years more and more features were added, and now the complex now includes a wide range of facilities. This includes Finnish saunas alongside cold plunge pools and salt chambers, as well as professional massage services.

It took quite some time for Gellért to follow Szechényi Baths’ example, though, holding out until as recently as 2013 before finally becoming mixed-gender baths. Before then, men and women were required to only enjoy their own wings of the complex, unable to share the experience with loved ones and friends of the opposite sex. 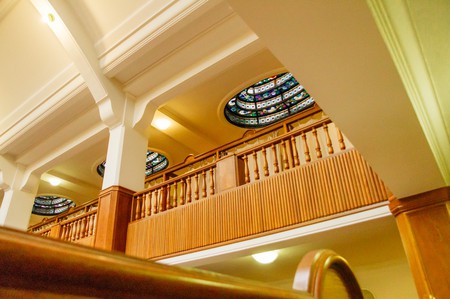 The Waters of Gellért

While the spa complex includes a wide range of available water-based facilities, it’s the thermal baths that remain its most significant features.

The mineral waters that supply Gellért Baths comes from deep underneath the nearby Gellért Hill, pumped naturally from underground thanks to the pressure created within the network of rocks.

The temperature of this thermal water ranges between 35-40°C (95-104°C), and contains calcium, magnesium, hydrocarbonate, alkalis, chloride, sulfate, and fluoride.

Due to the influence of these minerals, the waters have various health benefits, and typically visitors to Gellért Baths are there for medical reasons. In this way, they can help cure or reduce the effects of issues related to joints, nerves, blood circulation, and even respiratory systems like asthma and bronchitis.

Getting to Gellért Baths

Though it is located on the Buda side, getting to Gellért Baths from anywhere in the city is a simple task.

From Pest it’s a case of either getting the green line M4 metro service to Szent Gellért tér, from which the building is located directly opposite. Typically this means swapping at Rákóczi tér from the 4/6 tram. 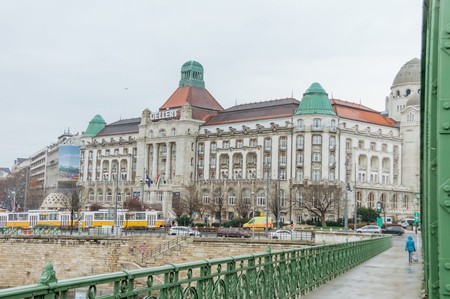 However if you’re in downtown Pest near Deák Ferenc tér or the party streets of Király, Dob and Wesselényi, then the route there is even simpler. Just get the 47 or the 49 tram across Szabagság híd (or Liberty Bridge) and get off at Szent Gellért tér.

If you’re on the north side of the city, then getting the tram along the river can make for a pleasant trip. On the Pest side, you’ll want the old school number 2 tram, get off at Fővám tér and then walk across the bridge. On the Buda side, simply take the 19 or the 41 trams. 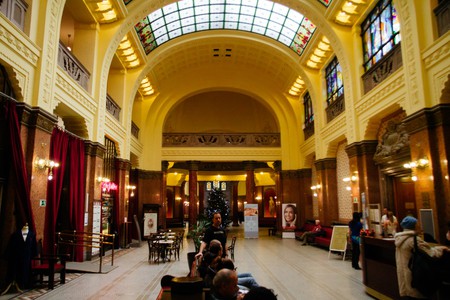