An Art Lover's Guide to Budapest in 24 Hours 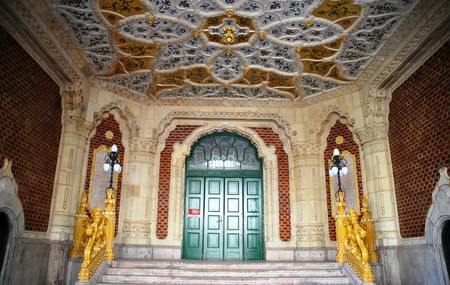 Budapest is home to a vibrant artistic scene, with a combination of traditional museums and recently opened galleries contributing to its eclectic selection of artistic venues. If you find yourself short on time but still want to experience the art of Budapest, these are the places to put on your itinerary.

Hungarian National Gallery
For an all-encompassing look into the history of Hungarian art, this museum found in Buda Castle is a must visit. Founded in 1957, the gallery is home to collections of art from across the centuries – ranging from the stone carvings of the 11th century to works painted by renowned Hungarian artists during the 1900s.

Insider tip: You can get a Budapest Card for a period of 24, 48, or 72 hours, which offers unlimited transport in the city as well as discounted entry to a number of museums, including the Hungarian National Gallery. 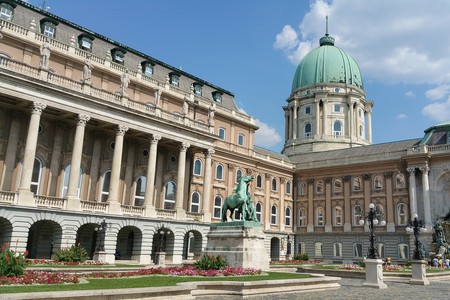 Museum of Applied Arts
Built during the late 1800s in the Art Nouveau style, the outside of the museum is a work of art in itself, with its colorful tiled exterior. Inside, you’ll find plenty more creative inspiration: the museum houses art works showcasing Hungarian craftmanship, displayed according to craft, material and technique. The museum displays a number of temporary exhibitions alongside its permanent collection and runs events throughout the year.

Insider tip: On Hungary’s three national holidays (March 15, August 20, and October 23) Hungarian and EEA citizens can visit the museum for free; on the third Saturday of the month, the permanent exhibition is free to visit for those under the age of 26 as well as two parents accompanying those under the age of 18. 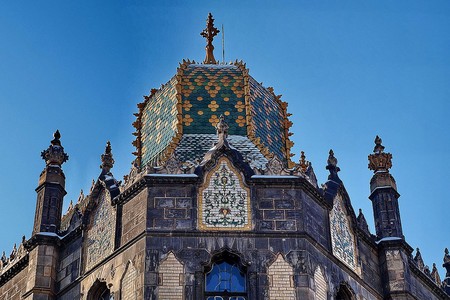 Kunsthalle (Budapest Hall Of Art)
An impressive building on Budapest’s Heroes’ Square, this museum plays host to a large number of contemporary art pieces by Hungarian and international artists. As well as established works created by well-known artists, the museum provides a platform for up-and-coming talent, allowing it to present the latest artistic trends.

Insider tip: Book tickets online to skip the queue; the Budapest Card also offers visitors a 20% reduction on ticket prices at the Hall of Art. 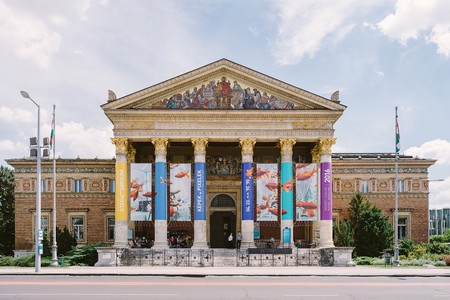 New York Café
This luxuriously decorated café is notable for its history as one of the city’s former meeting points for intellectuals and artists during the 19th and early 20th centuries. Opened in 1894, it originally housed the offices of the Nyugat magazine and was a hub of creativity in its heyday. Hungarian sculptor Károly Senyei contributed works to the café’s interior and exterior, while frescoes by Gusztav Mannheimer and Ferenc Eisenhut adorn the ceiling. The café itself serves a range of drinks and traditional Hungarian cakes and, with its old world charm and grand scale, is a great place to stop off on your tour of the city’s artistic hangouts! 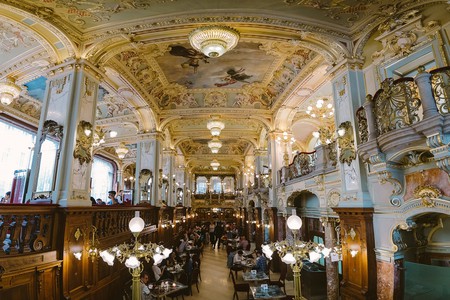 Hadik Café
Originally opened in 1911, this café on the Buda side of the city was a Budapest institution for over 40 years before closing down in 1949. During this time, it welcomed a number of intellectual and artistic figures, with writers and journalists such as Karinthy, Móricz, and Kosztolányi passing through its doors. Re-opened in 2016, the café retains much of its original charm and creative atmosphere.

Müszi
This cultural space off the beaten path holds exhibitions on a regular basis, with community arts projects, workshops and events all on the calendar. The gallery only opened in 2012, but has already gained a loyal local following. Resident and guest artists all show their work here, and the focus is on its role as a community art space – its full title is Művelődési Szint, which means Community and Art Floor in Hungarian.

Hungarian House of Photography
Spread over three floors, the former home of Hungarian Imperial and Royal Court Photographer Mai Manó has been turned into a must-visit gallery in the center of Budapest. Dedicated to photographic works of art as well as educating visitors on the history of photography, pieces from international and local photographers are on display and the bookstore on the ground floor is also worth a browse.

Keen to show off my knowledge of Robert Capa, but I was the only person in the gallery. #mypretentiouslife #budapest #maimanohaz #gallery

Empty, run-down building façades in Budapest have become canvases for a number of street artists over the last few years, as a number of projects work to brighten up the city through art. Neonpaint Works and the Szines Varos group are both responsible for some of the city’s best public art: just take a walk through the Jewish District and see for yourself! Alternatively, take a street art tour to learn more about each piece as you go along – Original Europe Tours offer a free walking tour of the alternative side to Budapest, with street art and graffiti covered along the way. 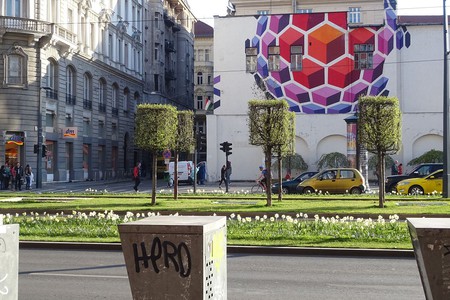 KönyvBár
This restaurant in Budapest’s 7th district features a menu designed entirely around a different book each week. The walls are covered with literary tomes, the atmosphere is cosy, and the service comes with a smile – not to mention the environment is decidedly creative!

Insider tip: book in advance – the restaurant is popular with visitors and locals, and reservations are almost always essential.

Best restaurant concept ever: each week the menu is inspired by a book 📕📗📘📙. This week the book was Miss Peregrine's Home for Peculiar Children 🕷 👻 🔪

M. Restaurant
Traditional Hungarian cuisine with a hint of French cooking, drawing-covered walls, and an intimate atmosphere all make this bistro in the Jewish Quarter one to visit on your art tour of the city. Tables are covered in paper and pens are provided to let visitors create their own work of art.

Insider tip: arrive early or book ahead: as a small restaurant, tables fill up quickly!