An Architecture Lover’s Guide to Budapest

Join Culture Trip on a tour of Budapest’s most striking architecture, from the Gothic Revival Hungarian Parliament Building to the Neoclassical St Stephen’s Basilica.

Budapest is bursting with buildings of various styles, with some dating back to the 13th century.“People who are interested in architecture should visit Budapest for the mix of old and new architecture,” says Viktor Fikó of Hungarian firm NAPUR Architect. “The inner city’s buildings are mostly old, with some newly designed buildings; the outer city is the exact opposite.”

From old to new, here are the buildings and landmarks you should check out when in the Hungarian capital. 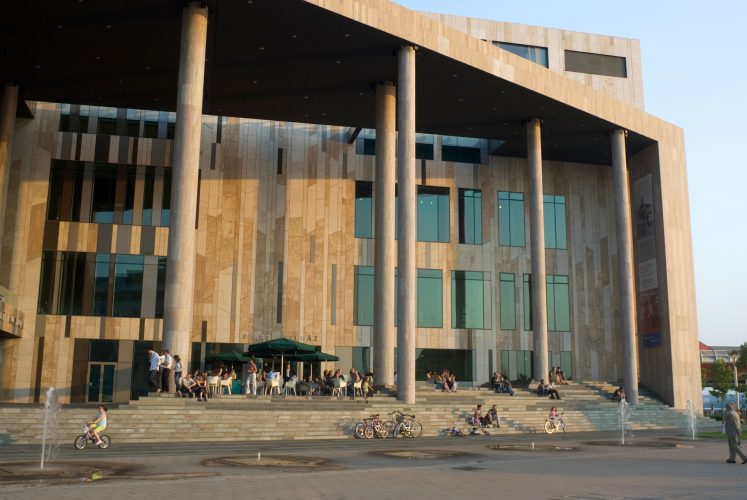 Once known as the Palace of Arts, Müpa Budapest is one of the city’s most modern cultural institutions. Visitors can experience classical, contemporary, popular and world music, along with contemporary circus, dance, literature and film. However, it’s not just the range of events that attract visitors – the building itself is well worth seeing. Designed by architects Zoboki-Demeter & Associates, it represents more than a century of Hungarian cultural history and houses several cultural venues. The massive limestone building with its gigantic windows on the Danube waterfront is an impressive sight. Inside, warm wood decorates the huge concert halls. 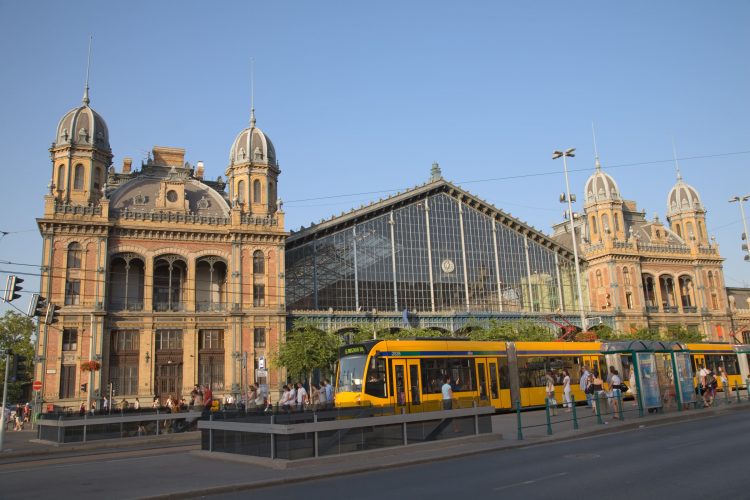 Budapest’s Western Railway Station (Nyugati Pályaudvar) serves many national and international destinations as one of the city’s primary transport hubs. Beyond practicality, the station draws numerous visitors thanks to its architectural significance. Designed by August de Serres and built by the Gustave Eiffel Company, the station opened in 1877 – the Eiffel Tower opened 12 years later. Similarities between the two are visible in the station’s iron structure, which was originally cast in Paris. It also has a large glass facade as well as several domes. 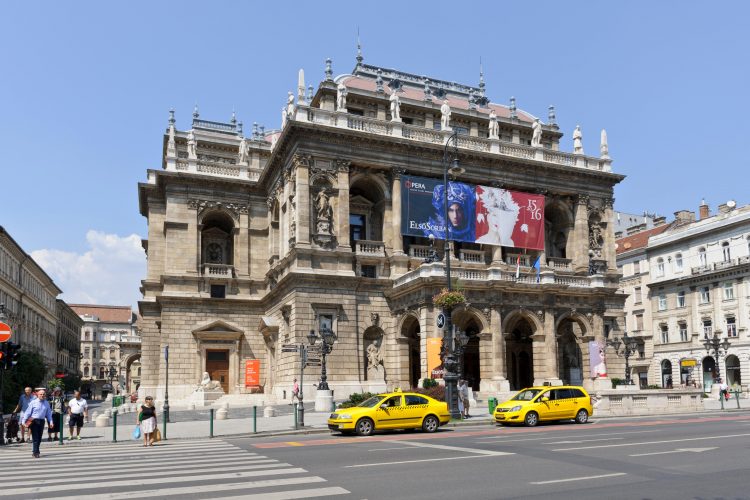 Designed by Miklós Ybl, who also contributed to the creation of St Stephen’s Basilica, and built between 1875 and 1884, the Neo-Renaissance Hungarian State Opera House lies on the UNESCO-listed Andrássy Avenue. The symmetrical limestone facade is decorated with musical references, with sculptures of 16 composers on the upper terrace and statues of Hungarian composers Ferenc Erkel and Franz Liszt – built by Alajos Stróbl – on either side of the entrance. The interior features marble and gold accents, while a fresco by Károly Lotz adorns the ceiling. Its horseshoe-shaped auditorium can seat around 1,300 spectators; however, those not wishing to attend a performance can book a place on a guided tour of the building. 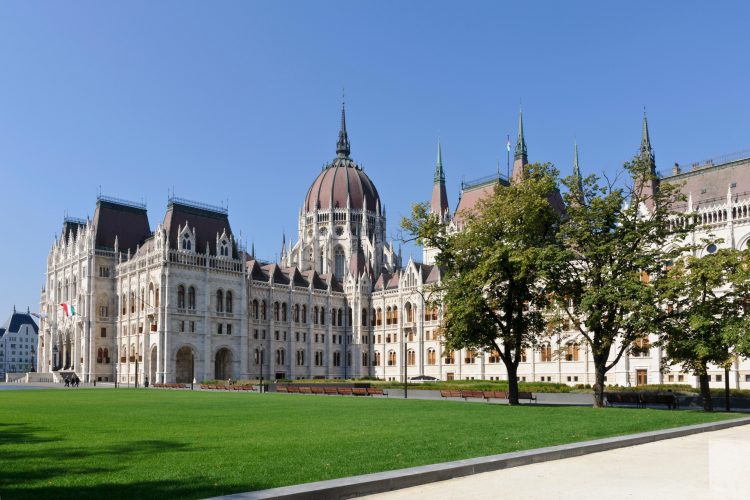 The Hungarian Parliament Building stands on the banks of the Danube on the Pest side of the city and is notable for its size – it’s the third-largest parliament building in the world. Built primarily in the Gothic Revival style, with a symmetrical facade, the building also features a Renaissance Revival-style central dome and comprises bricks, precious stones and gold, adding to its opulent feel. Its architect was Imre Steindl, who won a competition to design the structure. Construction began in 1885, though the building didn’t open until 1904, by which time Steindl had passed away. 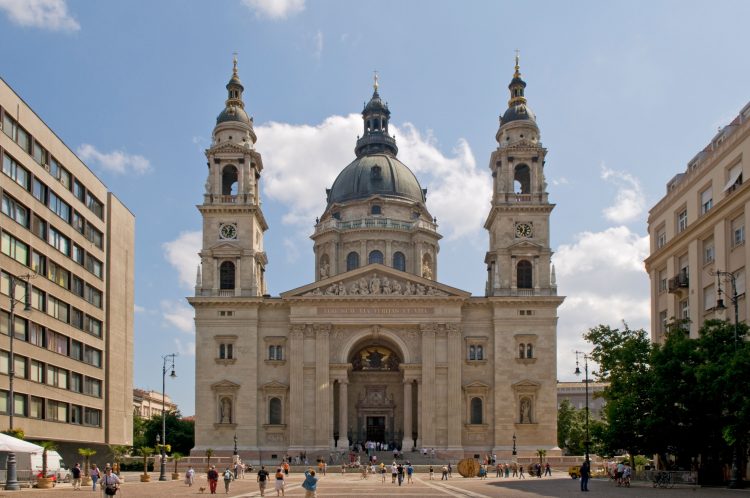 This Roman Catholic basilica in downtown Budapest was completed in 1905 and is one of the city’s tallest buildings – 96 metres (315 feet) – with a height equal to that of the Hungarian Parliament Building. Architects József Hild, Miklós Ybl and József Kauser oversaw the construction of the basilica, which is Neoclassical in style. Its interior is rich in marble and gold, while the facade is made from stone. There are two bell towers and a central dome that collapsed during construction in 1868, thereby contributing to the 54 years it took to build the basilica. Today, visitors can explore inside the building and ascend a tower for panoramic views of the city. 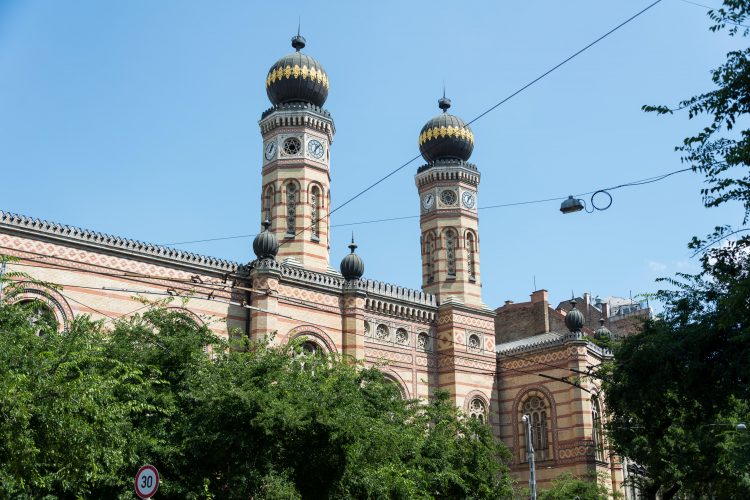 The largest synagogue in Europe, the Dohány Street Synagogue (also known as the Great Synagogue), was designed by Viennese architect Ludwig Förster, who drew architectural influence from Islamic structures in North Africa and Medieval Spain. Built in the Moorish Revival style, the synagogue also features Byzantine, Romantic and Gothic elements. Frescoes by Hungarian architect Frigyes Feszl adorn the interior, while the outside of the building features two towers with onion-shaped domes and ornate decoration. While badly damaged during World War II, the synagogue resumed its original function as a place of worship for Hungary’s Jewish community during the Communist era. However, it wasn’t restored to its former glory until the 1990s. 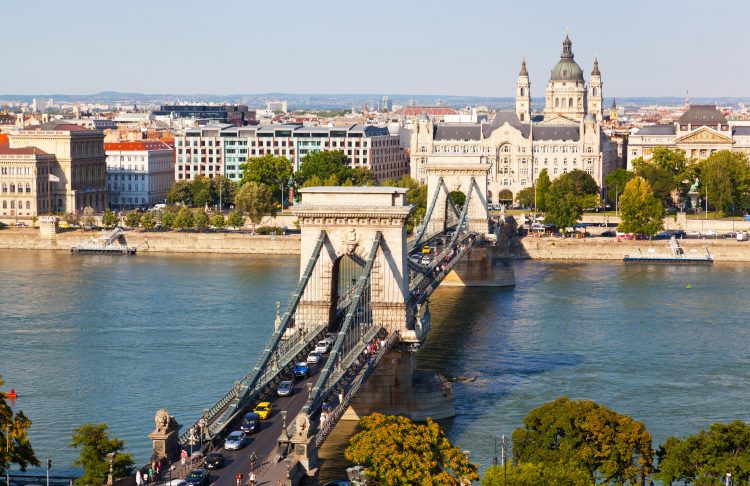 Budapest’s oldest bridge is also one of the city’s most iconic; built between 1840 and 1849, the Széchenyi Chain Bridge was the first permanent crossing over the Danube. English engineer William Tierney Clark was responsible its design, with construction overseen by Scottish engineer Adam Clark. Connecting Buda and Pest, the bridge features carved stone lions (their tongues only visible from above) at either end, while wrought-iron chains link two 48-metre-tall (157-foot-tall) river piers built in the Classicist style – giving the bridge its name. In 1945 during WWII, the Germans blew up the bridge, with only the pillars surviving. Rebuilt in 1949, it acts as an integral part of the city’s landscape today and has pedestrianised sections on either side. 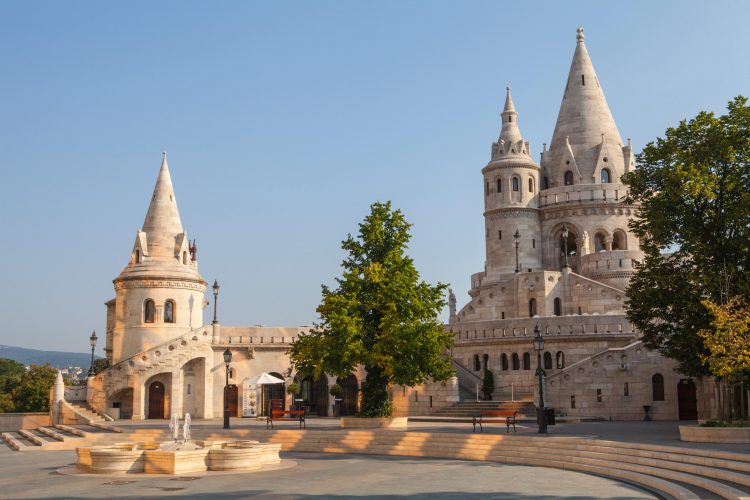 The Fisherman’s Bastion dates to 1895, honouring of the 1,000th anniversary of the Hungarian state | © Chris Dorney / Alamy Stock Photo

Built between 1895 and 1902 to celebrate the 1,000th anniversary of the Hungarian state, the Fisherman’s Bastion is a viewing terrace – hence its decorative appearance – designed by architect Frigyes Schulek. Inspired by the Neo-Romanesque architecture of early Hungary, seven stone lookout towers each feature one of the seven Hungarian chieftains who were instrumental in the creation of Hungary and settled here in AD 895. Urban air pollution during the late 20th century saw the walls of the bastion turn grey. However, they – along with a number of the statues – were restored, making the site one of Budapest’s most popular attractions. 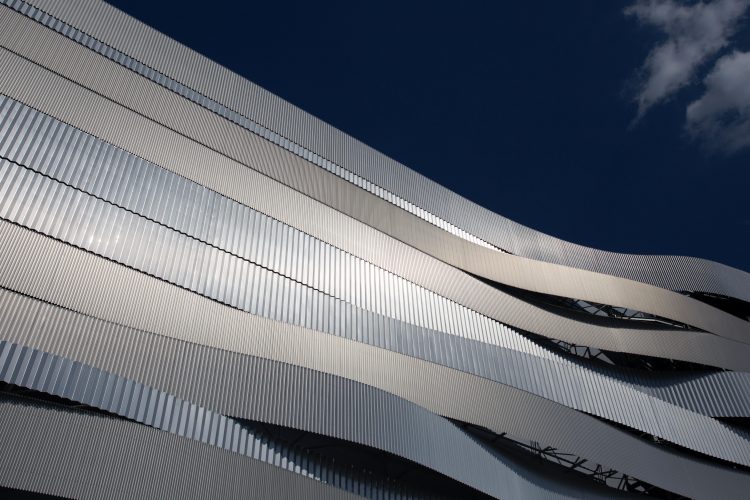 The Duna Aréna is a new addition to Budapest, constructed for the 2017 FINA World Championships. The aquatics complex hosted the swimming and diving competitions, but today, its pools are open to the public. Designed by NAPUR Architect, the facade of this gigantic metallic building resembles rippling waves, echoing and reacting to the movement of the Danube. Since being built, the Duna has become a model for future Olympic aquatics centres in both Tokyo and Paris.