A Tour of Budapest's Architectural Landmarks 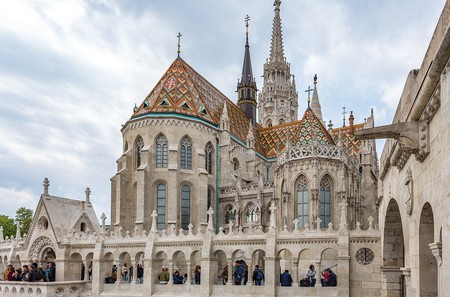 In a city filled with so many architecturally impressive structures, it can be hard to know where to begin. Budapest‘s buildings are a mixture of old and new, with styles ranging from Art Nouveau to Gothic Revival gracing its skyline. To make things easier, we’re going on a tour of some of the city’s finest architectural landmarks.

Start the day at the Fisherman’s Bastion (it’s stunning at sunrise, but beautiful throughout the rest of the day as well for those unwilling to rise before 7am). Construction was completed in 1902, with the neo-Gothic and neo-Romanesque architectural styles contributing to a fairytale appearance. It was built as a viewing terrace, and affords breathtaking views across the Danube to Pest. While there, check out Matthias Church: a Gothic building with a colourfully tiled roof. 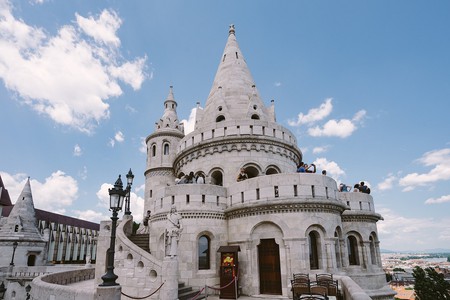 From here, it’s over to Buda Castle – an impressive Baroque-style palace and a UNESCO World Heritage Site. The grounds are free to wander but you’ll need to pay a visit to one of the museums inside to check out the interior; these include the Hungarian National Gallery, which is a great way to discover the country’s artists.

Take a walk down to the Chain Bridge through the grounds of the Neo-Renaissance Castle Garden Bazaar, stopping to admire the intricate architectural details and remnants of Turkish rule (a series of walls and artifacts were discovered from the Ottoman era during construction). Once you reach the Chain Bridge, take a moment to admire the two stone lions at the abutments, before walking across to reach the Pest side of the city. 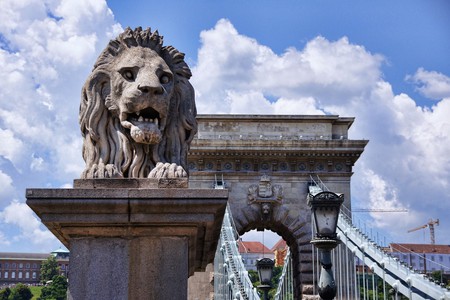 At the end of the bridge stands the Art Nouveau exterior of the Four Seasons Gresham Palace, which is well worth checking out as you make your way over to St Stephen’s Basilica. Built in 1905, the latter is one of Budapest’s tallest buildings (sharing the accolade with the Hungarian Parliament Building) and as well as an architectural landmark; it’s also a working site of worship as a Roman Catholic church. Around the Basilica, you’ll find plenty of restaurants and cafés in which to grab a bite to eat before continuing to explore Budapest’s architecture.

A stroll across to nearby Liberty Square reveals the stunning façade of the Royal Postal Savings Bank; designed by Hungarian Art Nouveau pioneer Ödön Lechner, it’s decorated with colourful tiling and floral motifs.

Not far away stands the Hungarian Parliament Building, one of Budapest’s most recognisable structures. Its size alone makes an impression: it’s the world’s third largest parliament building, and the Gothic Revival-style exterior has made it one of the city’s most iconic landmarks. Overlooking the Danube, it was built in 1904 by architect Imre Steindl, and was intended as a symbol of Hungary’s sovereignty. 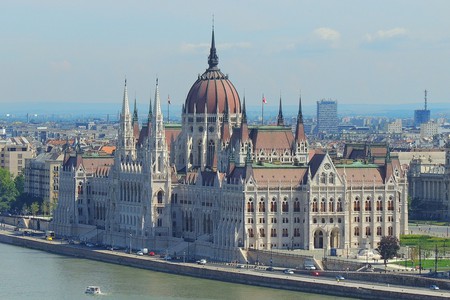 A short walk away, Nyugati Palyáudvar (Nyugati Train Station) was built by the Eiffel Company in 1877 and, as well as serving as one of Budapest’s main transport hubs, it’s also become a popular architectural sight and filming location (it recently starred in a Lacoste commercial). The McDonald’s next door holds a reputation as one of the world’s most beautiful, housed in a stunning building.

Hop on the tram 4/6 for one stop, alighting at Oktogon, to explore the UNESCO-listed Andrássy Avenue, lined with townhouses and luxury shops. Walking towards Deák Ferenc ter, you’ll pass the Hungarian State Opera House. Built in the Neo-Renaissance style and designed by renowned architect Miklós Ybl, it’s known as one of the most beautiful in the world. Guided tours of its interior are available for those who want to check out frescoes and murals by Hungarian artists such as Károly Lotz.

Opposite the Opera House stands the now dilapidated Drechsler Palace, once home to the Ballet Institute. Since 2002, it’s stood empty; however, its neo-Renaissance architecture is still visible from the outside. 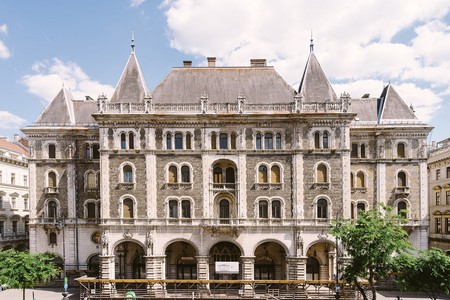 Our tour concludes with a visit to Budapest’s Jewish quarter, to admire the façades of some of its most beautiful synagogues. First up, the Rumbach Street Synagogue was built in the Moorish Revival Style in 1872 and boasts an intricately beautiful exterior, designed by Viennese architect Otto Wagner. A relatively hidden gem, it’s quieter than it’s nearby neighbour – and Budapest’s most famous synagogue – the Dohány Street Synagogue. The world’s second largest synagogue, it was also designed in the Moorish Revival Style, and its architect Ludwig Förster took inspiration from Islamic buildings in conceptualising its design.