The 10 Best Cultural Restaurants In Budapest

Filled with history and culture, Budapest also has also lot to offer when it comes to its food scene. The recent restaurant boom and new culinary influences from overseas are continuously shaping the city’s gastronomic scenery, resulting in remarkably eclectic options from markets to traditional inns to Michelin-starred spots. We bring you a curated roundup of the ten best cultural restaurants in Budapest.

The first Nobu restaurant was opened in New York City in 1994; since then, it has become a Japanese culinary empire. In 2010 it opened its first branch in Central Europe with Nobu Budapest. Located in the luxurious Kempinsky Hotel, if you’re looking for an upscale dining option with unquestionable culinary credentials, Nobu is the perfect choice. The avant-garde Japanese establishment serves contemporary, redesigned Japanese specialties and alongside the sushi bar, guests can enjoy the unmissable signature dishes of creator and Chef Nobuyuki Matsuhisa. The interior is elegantly chic just like all the Nobu venues, with a design by the Rockwell Group, who are known for their ability to create an impeccable atmosphere.

This unique cultural hotspot is an unmissable experience while visiting Budapest. Nestled on the second floor of a former department store, Alexandra Bookcafe is decorated with the stunning work of painter Károly Lotz, and thus often referred to as the Lotz room. Lotz’s masterpieces make the venue an outstanding cultural haunt with a museum-like vibe. The building, originally built as a casino in 1884, is an architectural gem exemplary of the Art Nouveau style, its opulence suffusing every corner. The cafe itself offers visitors an array of light dishes, including sandwiches, bagels, cheese platters and Francia krémes, as well some of the best desserts in town accompanied by excellent coffees, all served in a ballroom-style environment. The lower levels of the venue are part of an excellent bookstore, further enhancing the venue’s cultural vibe, where free WiFi and an in-house pianist guarantee a memorable time to all visitors.

Apacuka is a space with style, unique ideas, and a sense of humor. Artistically minded and displaying contemporary sculptures to create an inspiring, creative atmosphere, the restaurant consists of four rooms and an open terrace. Apacuka serves premium Hungarian-French cuisine and a daily menu at pocket-friendly prices, making it an excellent choice for all occasions and for all tastes. With its service praised citywide, free WiFi, and frequent exhibitions and fashion shows, Apacuka is true melting pot for culture and food lovers.

At a historical turning point in 2010, Costes became the first Michelin-stared restaurant in Budapest. Set in an old building in the heart of the city, the restaurant’s interior breathes sophistication, offering a high-end atmosphere where guests are taken care of from the moment they arrive. The menu consists of modern Hungarian and international dishes, among which the highlighted specialties are undoubtedly the roasted quail stuffed with duck liver, baby spinach and cauliflower purée and the dessert plate. Choose from the four to seven-course tasting menus or opt for any of the house specialties. Mouth-watering tastes are guaranteed by Portuguese Head Chef Miguel Rocha Vieira, who also ensures that each dish leaves the kitchen as a small piece of art. In addition to the innovative plates and upscale service, an outstanding selection of over 320 bottles will be enjoyed by all wine enthusiasts.

This much-admired creation of Károly Gundel has been redefining Hungarian cuisine and giving it a whole new gastronomic direction. After he had documented the culinary traditions of the Carpathian basin region, Gundel collected the most stunning or iconic recipes and began to develop them on his own. Opened in 1910, the award-winning and Michelin-recommended Gundel has secured a reputation as one of the leading names in Hungarian gastronomy. Its elegant, yet simple interior featuring paintings by well-known local artists is the perfect accompaniment to the typically Eastern European menu – as is the much-loved in-house Gundel Band.

‘Lacikonyha’ is a 15th century Hungarian expression used to describe a restaurant. Though it once referred to a cheap, small, temporary locale, Budapest’s culinary gem, Laci!Konyha! is a contemporary boutique restaurant that serves food made from traditional Hungarian ingredients in a modern, innovative way. With swing chairs and quirky, idiosyncratic decor on the walls, Laci’s interior is both cozy and original. A small spot off the tourist track, Laci!Konyha! delights with its fresh and seasonally changing menu of bistro-style treats, as well as a more refined, tasting menu for the real gourmet. 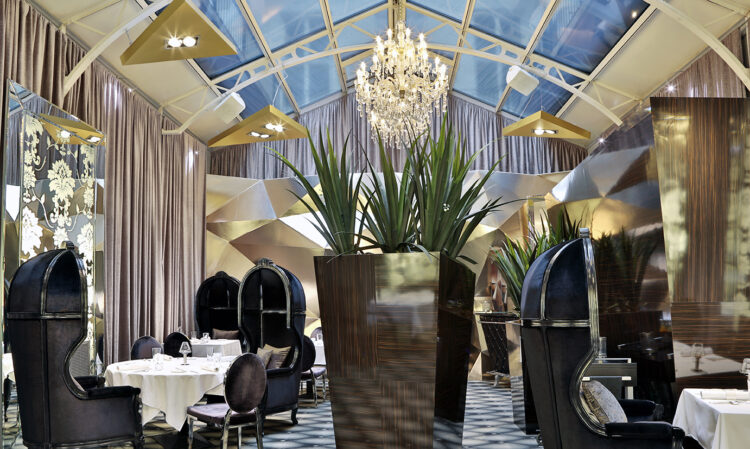 An interior shot of Onyx | Courtesy of Gerbeaud Gastronomy Ltd

Ever since its launch in April 2007, Onyx Restaurant has been faithful to its ethos of aiming to be an internationally acclaimed fine dining venue. Over the last decade, Executive Chef Szabina Szulló, Sous-Chef Tamás Széll and the rest of the team have been at work to create a high-end version of traditional and modern Hungarian cuisine. Every ingredient undergoes a strict selection process to ensure its richness of flavor; and just like the food, the staff is carefully selected, then trained in line with the Onyx philosophy. Seen by many as one of Budapest’s best restaurants, Onyx is centrally located on Vörösmarty Square and is now the second restaurant in town awarded with a Michelin star.

Nestled among Budapest’s landmark buildings, Robinson Restaurant is located on the lake of Városliget just a few steps from the famous Hero’s Square and the Museum of Fine Arts. Thanks to its picturesque setting and stunning views all year long, Robinson is justly named among the most romantic restaurants in town. Opened in 1989, the restaurant is loved by visitors, including a host of prominent names such as Arnold Schwarzenegger, Sylvester Stallone, Robert Redford, David Copperfield, or Larry Hagman. A Mediterranean milieu, live Latin guitar music, an open-air terrace and a wide choice of delectable dishes await patrons. The menu suggests Hungarian-Mediterranean influences, offering mouth-watering specialties from the timeless kitchen of Robinson, accompanied by an excellent bottle selection from local wineries.

This fine dining restaurant, whose name literally translates as ‘the hundred-year-old restaurant’, has been offering the most sophisticated in Hungarian and international cuisine since 1831, which makes it one of the oldest establishments in the city. Traditional dishes like cold cuts, goose liver, cattle tongue and game fill the menu, accompanied by a selection of Hungarian wines and a live band playing upbeat gypsy music. Thanks to its excellent location, Százéves Restaurant is an accessible choice for all those who wish to add a superb dining experience to their city visit. 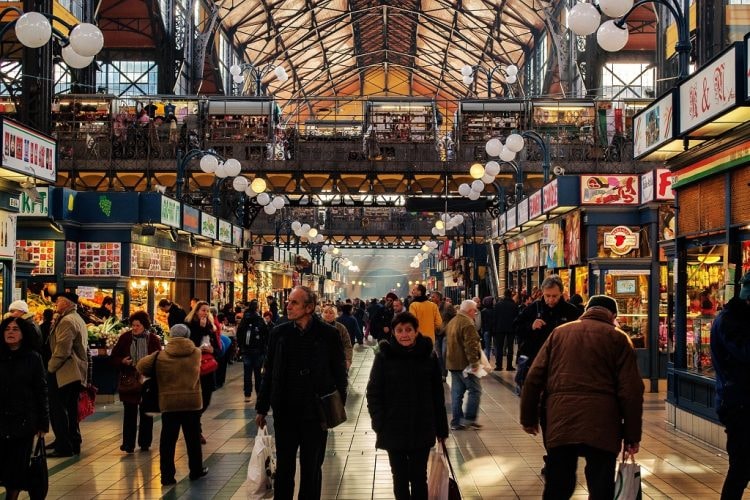 Those wishing to experience the full spectrum of the local food scene and get an intimate, behind-the-scenes look, will find that the Great Market Hall, also known as the Central Market Hall, is the perfect spot for culinary exploration. Constructed in 1897 and later extensively damaged during the Second World War, the market was restored in the 1990s to its full architectural glory and is now unquestionably one of Europe’s finest indoor markets. Covering three floors, the Great Market Hall is a great place to discover traditional street food specialties, including lángosh, the best-known fast food dish in Hungary. Besides ready-to-eat food, visitors can enjoy fresh goods and regional delicacies such as Tokaj wines, Hungarian paprika, excellent salami or other souvenirs.