15 Incredible Murals You Have to Visit in Budapest 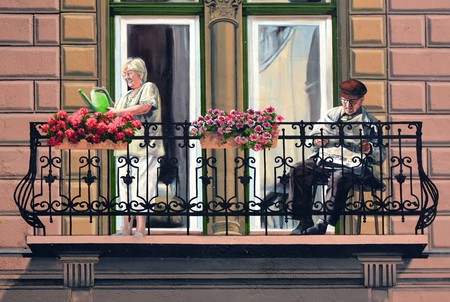 As with many capital cities, the number of huge murals covering the grim grey of brick and concrete in Budapest has increased over the years, with a number of artists and groups devoted to bringing a bit of colour to the cityscape. There are quite a number in the Hungarian capital now: enough to create your own art-fuelled tour of the city. These are the murals you have to see before you leave Budapest.

Situated on one side of an open car park, this mural has plenty of opportunities to be seen. It’s a popular one too, as the colour of the painting vibrantly contrasts with the grey of downtown Pest’s office quarter. 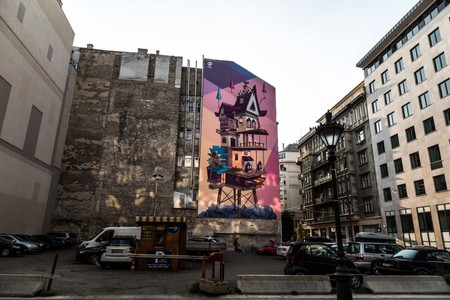 If you’re visiting Budapest for its party life, then the famous Király Street will certainly be a big part of your trip. This mural, which celebrates ‘the most Pest-ian street’, will be a familiar sight by the end.

This inventive mural relives the glory days of small, family-run stores. It is designed to blend seamlessly into the street front, helping to bring a piece of the past back into Budapest locals’ lives.

A post shared by budapestUNDERGUIDE (@budapestunderguide) on Nov 22, 2017 at 8:33am PST

Bel0ved by Hungarians, the historical figure of Empress Elizabeth of Bavaria – better known as Sissy – spent a great deal of time at the Royal Palace of Gödöllő near to Budapest. Capturing her regal spirit, beauty, and warmth, this mural is located opposite the Rubik’s Cube painting.

Most tourists visiting the capital city will likely only see a portion of what is on offer, and this mural in downtown Pest highlights the fact that there is so much more to head out and discover. 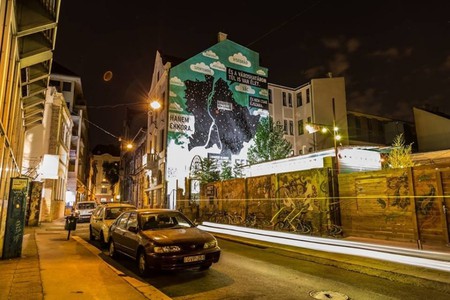 There’s a close bond between Hungary and Poland, one that goes back many years. Indeed, a poem that celebrates this relationship is known by heart by many Hungarians and Poles. This mural depicts this bond, portraying the two countries as individual tree trunks that have roots twisted together.

Did you know that the Rubik’s Cube was a Hungarian invention? Naturally, it is something that many Hungarians are proud of, hence the need for this colourful mural that celebrates the popular game.

It’s known as the match of the century in Hungary: when Hungary beat a strong England side 6:3 in a 1953 football game. It is actually Hungary’s largest mural, which might tell you something about how important this sporting achievement is considered.

Created as part of the most recent Színes Város Fesztival – or Colourful City Festival – this mural is a colourful reimagining of The Hitchhiker’s Guide to the Galaxy’s alcoholic beverage, the Pan Galactic Gargle Blaster. 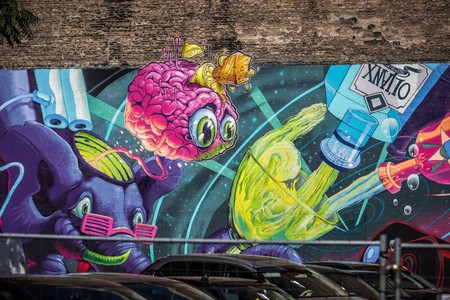 It’s tough bringing up kids in the city with limited access to nature. This mural makes the playground it covers just that little bit more colourful, and blends in to give a sense of open, natural space.

This impressive creation is located on Kazinczy Street, perhaps portraying the possibilities that are available to us in this age of technology. The high level of detail is incredibly impressive, making this mural a real stand-out.

You’ll need to look a little closer to find the full detail of this one: a stag blending in among all the colours. This is actually a reference to the Hungarian myth of the white stag, and was created as part of the Colourful City Festival. 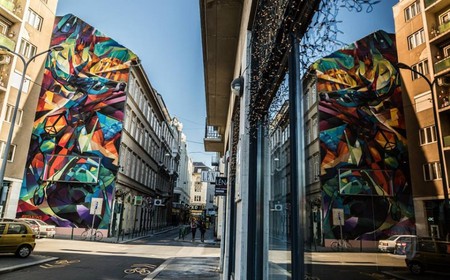 As part of 2017’s Colourful City Festival, the artist Vidám created his own take on the marketplace and the festival’s theme of ‘gastronomy’ with this distinctive piece. 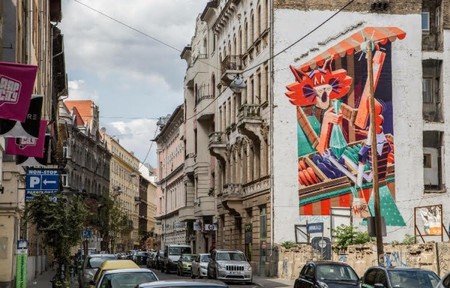 Painted by a Russian artist looking to capture the vibrancy of Budapest, this bright woman was created on an enormous, 240m² ‘canvas’ in only three days. 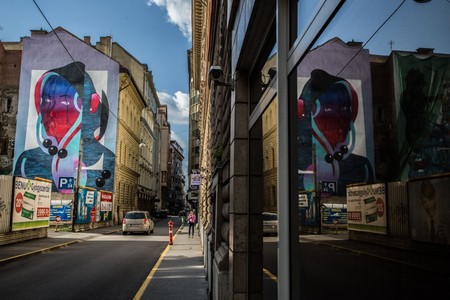 A colourful mural that represents the vibrancy of Budapest | © András Farkas, Színes Város

Man of the Year

This is a recreation of the 1956 Time Magazine cover article which named the Hungarian freedom fighter – representing all of the civilian fighters of the 1956 revolution – as the Man of the Year. It was painted in 2017, 60 years after the issue was published.

This neighbourhood is growing on me.

If you fancy taking the tour for yourself, just follow this guide…