The Best Luxury Hotels to Book in Hungary 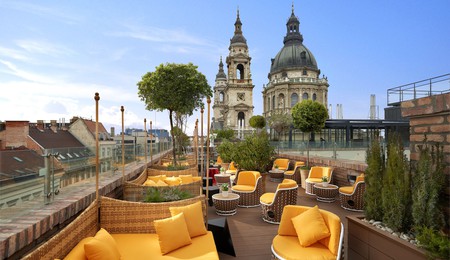 Whether you’re visiting the capital Budapest, a smaller city like Szeged or a rural spa town, Hungary has upscale hotels where guests can live in total luxury. And you can book them on Culture Trip.

Hungary, a landlocked country in Central Europe, is a great destination for travellers looking to feel spoiled. It’s visually stunning, thanks to its mix of architectural styles and verdant countryside. There’s an abundance of thermal baths and spas, so you can relax in mineral-rich waters. Foodies will enjoy its emerging high-end food scene, tasting refined versions of Hungarian dishes. And its many vineyards mean there’s plenty of local wine to discover. Here are the best hotels for discovering all of the above. 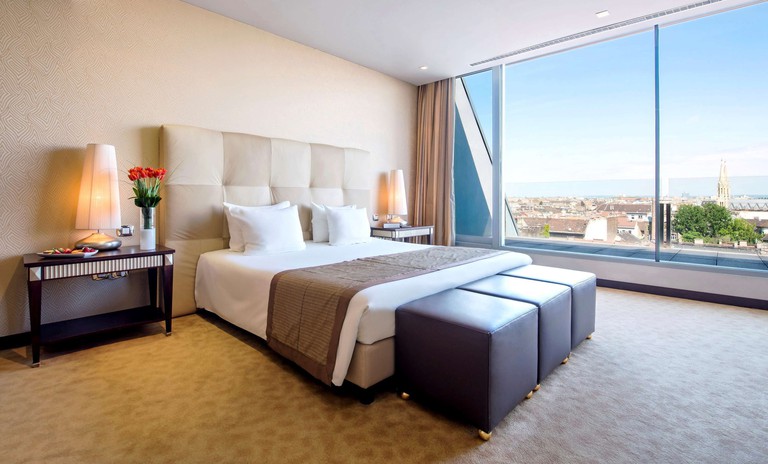 © New York Palace Budapest / Expedia
Palace is the right word for this grand hotel on Budapest’s busy Erzsébet Körút boulevard. Inspired by the opulence of the Italian Renaissance, the hotel is decked out in over-the-top decor, from the elaborate facade to the impressive marble flooring in the courtyard lobby and the gilded mouldings and frescoes in the iconic New York Café. The latter, which ironically serves Hungarian specialties such as goulash soup, is considered one of the most beautiful cafes in the world and is a hotspot on the city’s tourist trail. For fine dining fit for true royalty, though, there’s the hotel’s Salon Restaurant. Here, celebrity chef András Wolf creates refined, contemporary takes on traditional local dishes. 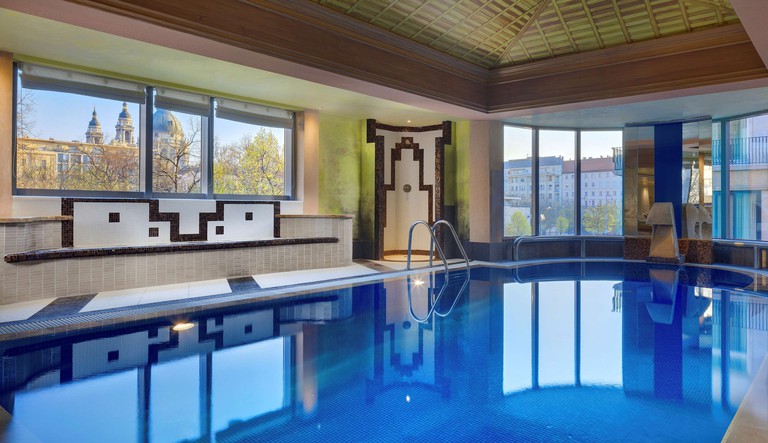 © Kempinski Hotel Corvinus Budapest / Expedia
This five-star hotel in downtown Budapest is modern luxury at its finest. It manages to convey richness and splendour without any overly ostentatious decoration. Instead, the bedrooms are elegantly appointed in creams and warm caramel tones, dark wood accents and the odd bit of subtle gilding. When it comes to dining options, guests are spoiled for choice: ÉS Deli for light bites, the informal brasserie ÉS Bisztró (try the hearty Hungarian Tafelspitz soup), and swanky Japanese fusion joint Nobu (the yuzu miso-marinated cod is a must). 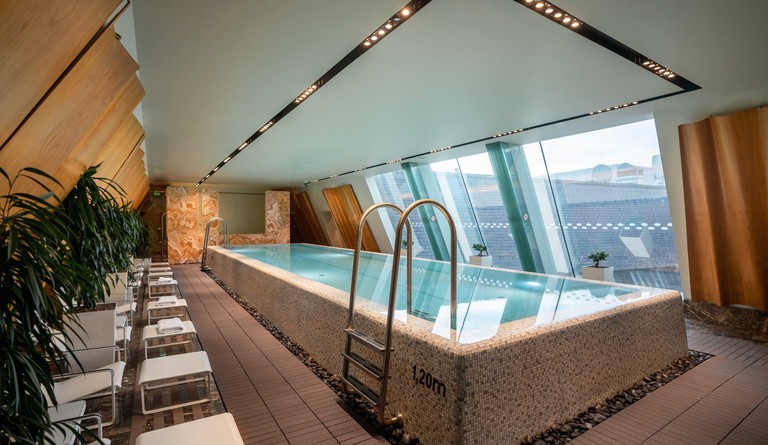 © Four Seasons Gresham Palace / Expedia
If you’re staying in a hotel that offers a limo service (just in case), you know it’s a luxury stay. But then, what else would you expect from a Four Seasons property? Despite this, it manages to avoid being too pretentious. Hotel Gresham Palace, which was originally built in 1906 on the site of a former – yep, you guessed it – palace, has an incredible location right by the Chain Bridge in Budapest. Not only a handy spot for exploring both sides of the city, it also means guests get postcard-perfect views of the Danube and the Castle District across the water. Other highlights include a sumptuous spa with an infinity-edge pool and the European brasserie Kollázs Brasserie & Bar. Make sure to try the signature dish of spicy octopus and seared scallop, paired with a potato gratin and Hungarian sausage. 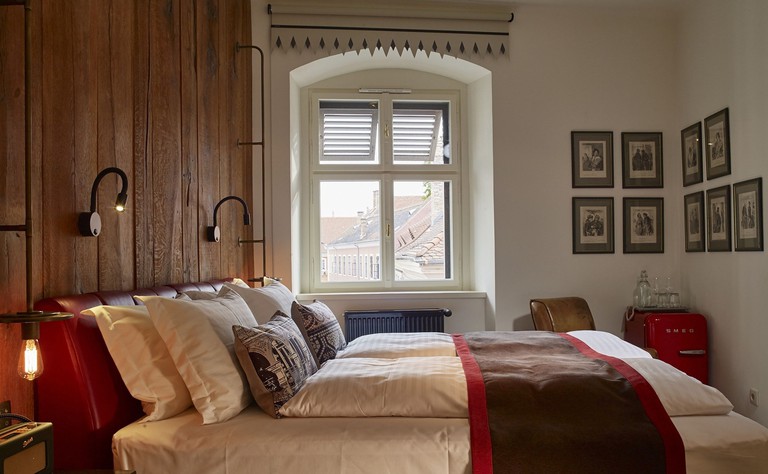 © Pest-Buda Design Hotel by Zsidai Hotels at Buda Castle / Expedia
Originally opened in 1696, this boutique hotel of just 10 rooms is officially the oldest hotel in Budapest. It makes sense, then, that it has a prime spot in the city’s historical Castle District, right by the one of the city’s must-visit attractions, the Fisherman’s Bastion. Wooden beams and original brickwork give a taste of the 17th-century inn, while flat-screen TVs, Smeg mini-fridges and industrial details such as exposed filament bulbs give it an up-to-date feel. Try some Hungarian classics, such as chicken paprikash, at the hotel’s cosy restaurant. 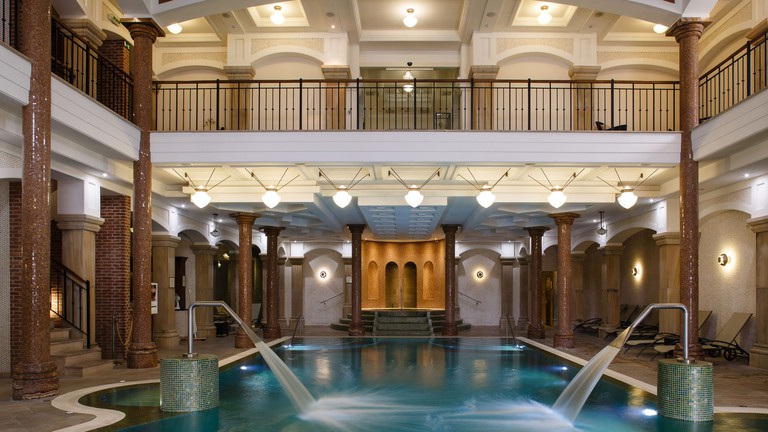 © Andrássy Rezidencia Wine & Spa / Expedia
One for wine fans, this five-star hotel is located in the Tokaj-Hegyalja wine region (around two-and-a-half hour’s drive from Budapest). The spacious rooms are suitably bougie, with sweeping drapes, throne-like armchairs and feature walls in rich jewel tones. The spa area is reminiscent of a roman bath house: marbled columns and archways surround an inviting pool and a steaming hot tub, while elsewhere a U-shaped cave bath provides a place to relax in gently warmed water or with the aqua-massage features available in its offshooting spa rooms. Wellness treatments include facials, massages and, of course, vinotherapy. In the hotel’s winter garden bar, you can undertake a whole other type of vinotherapy, whiling away the evening sipping on a selection of wines from the region. For food to pair with your booze, there’s the gourmet restaurant offering a seven-course tasting menu. 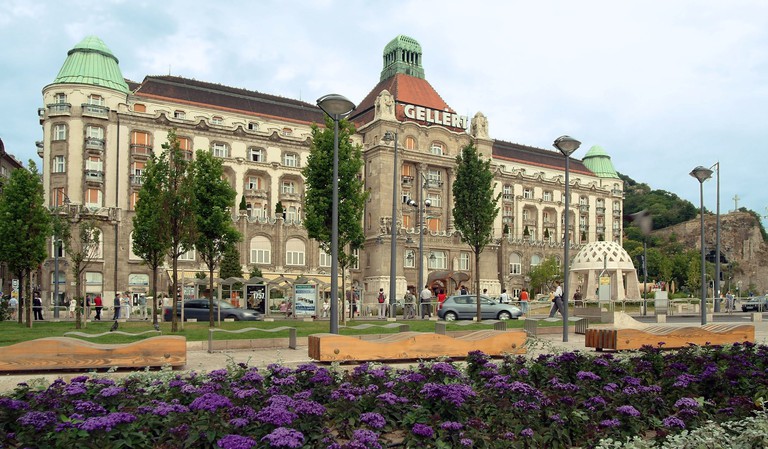 © Danubius Hotel Gellért / Expedia
Gellért Baths, the Art Nouveau spa attached to this upscale hotel, is the most famous of Budapest’s many thermal baths and worth a visit in its own right. Not only are its mosaics, colonnades and arched glass ceiling eye-poppingly beautiful, it also has multiple baths, steam rooms, and even an outdoor pool with an original wave machine from 1927. Hotel guests have access to the baths at a discounted rate. The hotel itself is just as impressive. Perched on the banks of the Danube since 1918, it’s become a landmark in the city. Its best feature is the Panorama Restaurant and terrace, which affords sweeping views across Budapest and serves fine-dining (yet filling) dishes such as duck leg with duck liver risotto. 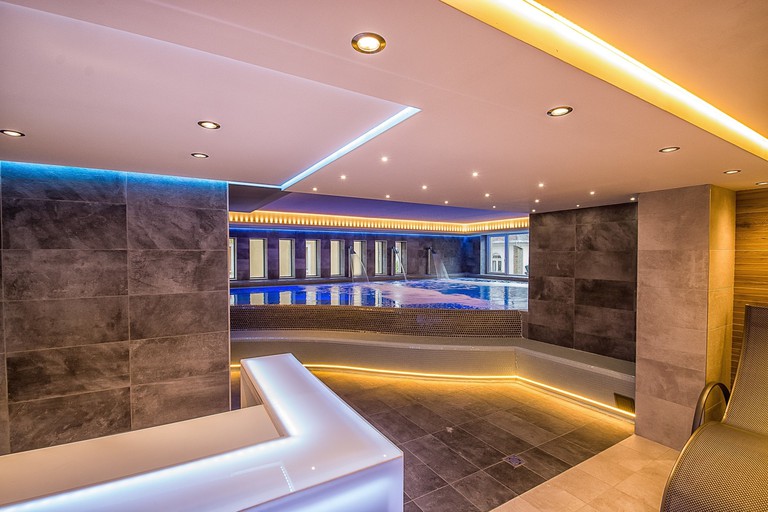 © Bonvital Wellness / Expedia
Although Budapest has more than its fair share of celebrated spas, there are plenty of more rural options for a more peaceful holiday. Héviz, meaning hot water, is a spa town a couple of hour’s drive from the capital that is home to the world’s largest natural thermal lake (that you can swim in), and Bonvital Wellness is the place to stay there. It’s ideally located just a six-minute stroll from Lake Héviz, though this adults-only hotel has its own free spa and wellness centre too (treatments cost extra). After a day spent destressing in the calming natural water, pruned guests can visit Brix Bistro for reviving dishes of salmon with cottage cheese raviolo and catfish Saltimbocca, along with live music on Friday and Saturday nights. 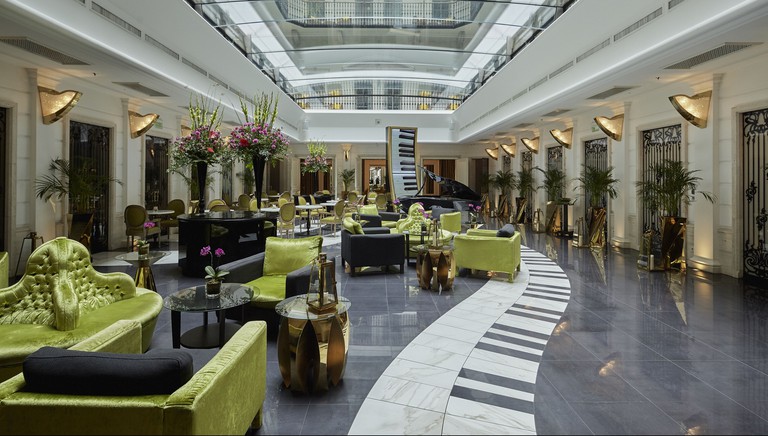 © Aria Hotel Budapest / Expedia
Music is at the heart of this five-star stay in the Lipótváros neighbourhood. If the name didn’t tip you off, the ginormous tiled piano meandering across the lobby floor might. Or perhaps the real grand piano, or the stave-inspired gating. Not to mention the restaurant named after famous Hungarian composer Liszt. Yes, the lavishly decorated Aria really is the ideal hotel for music lovers, especially since it’s located a few paces from St. Stephen’s Basilica and a mere five-minute walk from the State Opera House. To hear the sounds of the city instead, head up to the rooftop terrace that overlooks downtown Budapest. 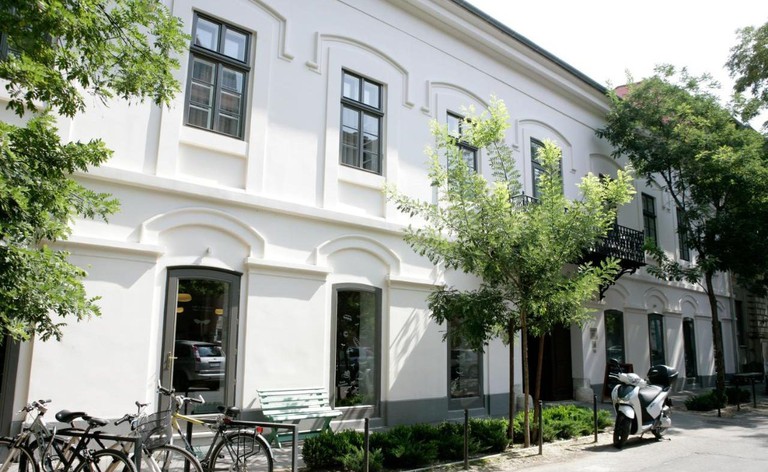 © Tiszavirág Hotel / Booking.com
If you’re headed to Szeged, Hungary’s third-largest city, then make a beeline for the boutique Tiszavirág Hotel. Housed in an old townhouse, a stay here feels as though you’re crashing at your most design-savvy friend’s place. Every aspect of the aesthetic has been considered, from the unusually shaped chairs to the soft furnishings’ variety of textures, while homely touches come in the form of house plants and stocked-up bookshelves. Although it’s only small, the hotel has its own wellness area and hipsterfied fine dining restaurant (order the salmon with a soya and yuzu broth). The location is great too, surrounded by cool restaurants, bars and shops, and just 10 minutes’ walk from Dom Square. 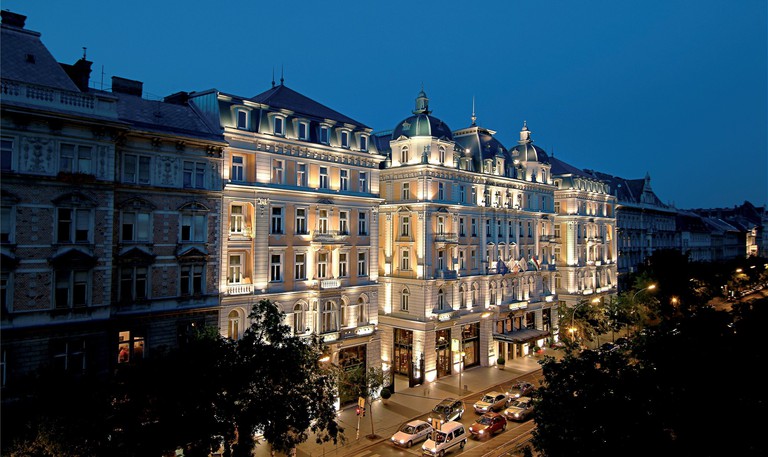 © Corinthia Hotel / Expedia
The Corinthia is exactly what you might imagine when thinking of a luxury hotel: a striking neoclassical exterior, a staircase lined with plants and gilt statues ascending to a huge marble-floored lobby, and impressive tiered light fixtures dangling from the ceiling. The Royal Spa is as extravagant as it sounds. Dating back to 1886, it has been restored to all its art nouveau glory and offers a decent-sized pool, jacuzzis, saunas and treatments, including an ESPA salt and oil scrub and an aromatherapy massage. When you’re feeling peckish, there are four restaurants to choose from. Go for high-end modern European dishes at the classy Brasserie & Atrium (we urge you to try the venison), or the lavish Caviar & Bull.

Heading to Budapest? Treat yourself with a stay at one of the top luxury hotels in the city, bookable on Culture Trip. For more options, discover our guide on the best cultural hotels in Szeged, Hungary, and book now on Culture Trip.

This is a rewrite of an article originally by Adam Barnes.