10 Traditional Hungarian Foods that Will Remind Magyars of Home 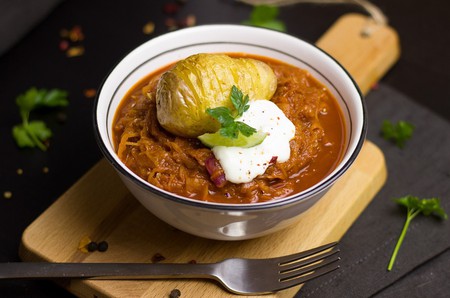 Hungarian food is known for its hearty, comforting dishes – and with so many mouth-watering options to choose from, it’s no surprise that many locals (and visitors!) begin to miss it the moment they step foot out of the country. From warming soups to delicious desserts, these traditional dishes are some national favorites.

A fried dough topped with garlic, sour cream, and grated cheese forms one of Hungary’s most popular street food snacks, and a favorite dish of many Hungarians across the world. Other toppings are also available, but it’s this traditional combination that is the most common and authentic, and the one most likely to remind any Hungarian of home. 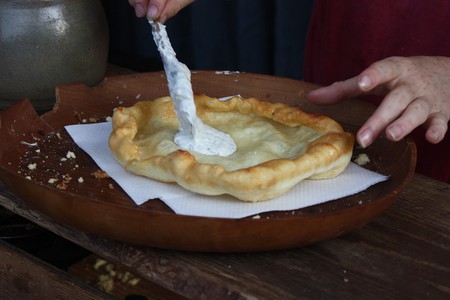 Főzelék simply refers to a hearty vegetable stew: the ingredients can vary according to preference, with lentil, green bean, and cabbage Főzelék all popular options. Technically neither a stew nor a soup, it’s a unique dish with no English translation and is so popular that cafés exclusively serving the dish can be found across Hungary.

This comforting dish consists of cabbage stuffed with minced meat, rice and seasoning (paprika is often involved, too), blanketed in a rich tomato sauce. A hearty meal reminiscent of grandma’s cooking, everyone has their own favorite recipe (often passed down through generations) and a good plate of this deliciously nostalgic dish when it’s cold outside is just what the doctor ordered.

Most commonly enjoyed during the warmer months, this is a cold fruit soup of various flavors: sour cherry is one of the more popular fruits used, and this version of the soup is the most typically Hungarian; however, everyone has their favorite when it comes to this refreshing dish. Usually served cold on a hot summer’s day, wine and sour or fresh cream are often added to the sour cherry variety which can be eaten as an appetizer or a dessert. 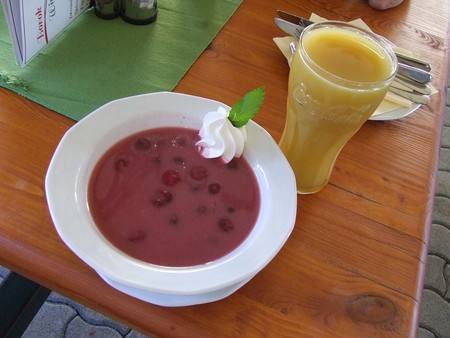 Poppy seeds are commonly found in Hungarian cuisine, and this is a dish that features them as a primary ingredient. The seeds are ground, before being mixed with sugar and added to tagliatelle-style pasta and a little melted butter. The result is a simple, sweet dish that is regularly found on the dinner table in Hungary and, thanks to its easy recipe using easily attainable ingredients, can be enjoyed no matter where you are.

Paprika is likely Hungary’s most popular spice, and these are a series of dishes in which it’s the star ingredient. Paprikash is composed of a creamy, paprika-rich sauce added to a number of different options: chicken, catfish, or mushrooms are the most common variations. Add nokedli (Hungarian egg noodle-dumplings), and the meal is complete. This is comfort food at its finest. 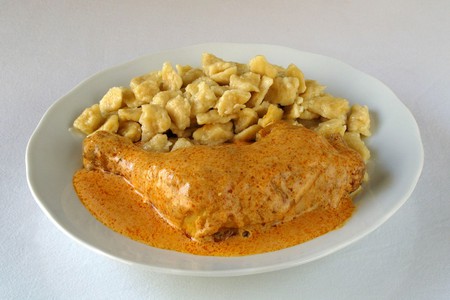 With its status as one of Hungary’s national dishes, it is no surprise that this is a dish that will transport Hungarians back home with the first delicious spoonful. A beef stew with plenty of paprika added for good measure, the recipe has evolved over time but the typically Hungarian dish remains as popular as ever.

Hungarian vanilla custard, layered between crisp, flaky slices of pastry, make up this delicious sweet treat, which is a favorite dessert across the country. Head to any traditional pastry shop in Hungary and krémes is almost guaranteed to be on the menu: it’s perfect enjoyed with a hot cup of coffee and is one of the most delicious, not to mention popular, Hungarian cakes. 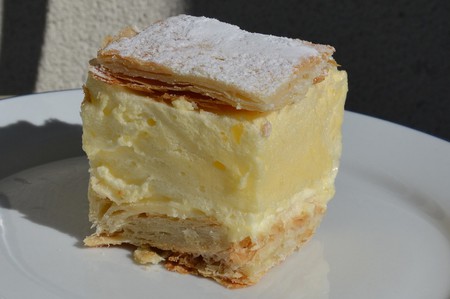 Warming, filling, and traditional, this paprika-based fish soup is a much loved Hungarian dish and traditionally uses carp, pike, or catfish in its recipe. Served in homes and restaurants up and down the country, the most authentic way to enjoy the delicious soup is with freshly caught fish from the Danube or Tisza rivers. The fish is then cooked along with a base of paprika, vegetables, and bouillon in a cauldron over an open fire, on the banks of the river: rustic, warming, and spicy, it’s a true taste of Hungary.

Multiple layers of different types of sponge cake (usually plain, chocolate, and walnut), cream, rum-soaked raisins, chocolate sauce…a number of deliciously sweet components make up this Hungarian trifle, which has been awarded by many with the title of “Hungary’s favorite dessert.” Indulgent, rich, and very moreish, the dish can be found in a number of styles, from hearty and homemade to refined and given a fine dining makeover. It’s the original, less contrived, version that is enough to transport any Hungarian back home. 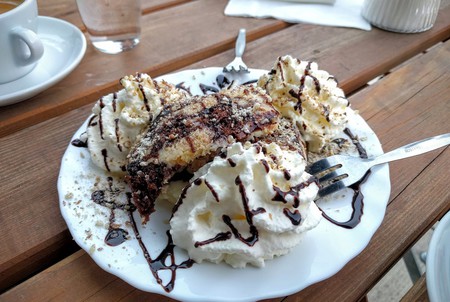