What to Watch at the Athens Open Air Film Festival 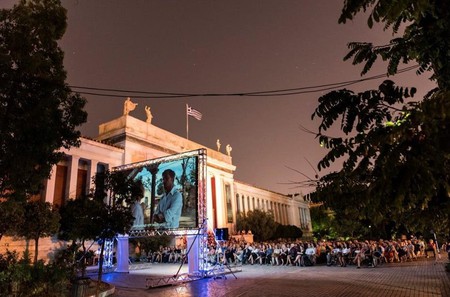 This year, the 8th edition of the Athens Open Air Film Festival (AOAFF) will transport visitors across countries and eras with a collection of free screenings open to everyone. Get ready to watch movies in squares, museums, public gardens and parks under the starry sky.

In 2018, the festival will feature a unique venue, the open-air theatre of Ancient Epidaurus. The program starts at 9.30 PM and features a mix of classics and cult movies. If you don’t know what to watch, here are some of the not-to-miss screenings you should bookmark this year.

Organised in collaboration with the Athens & Epidaurus Festival, the AOAFF will screen Michael Cacoyannis’s Electra in Epidaurus. The movie is considered to be one of the best examples of an ancient Greek tragedy adapted for the big screen. One of the most beautiful films according to Eugene Ionesco, the movie has received several international awards and was nominated for an Oscar in the Best Foreign Language Film category in 1962, confirming the quality of the film and the talent of Cacoyannis.

This movie is also part of the French Institute’s own open-air festival, Plein Air. Part of a trilogy with a theme of liberty, equality, and fraternity – the French revolutionary ideals – Blue tells the story of a wife (Juliette Binoche) left alone after the death of her husband and their daughter. She decides to cut herself from the world and live in isolation, although she finds out that it is impossible to live without any human contact.

Starring Julie Harris, Claire Bloom and Richard Johnson, The Haunting was adapted from the novel The Haunting of Hill House by Shirley Jackson, published in 1959. A sort of ancestor of the movie franchise Paranormal Activity, The Haunting portrays the experiences of a small group of people invited to investigate an allegedly haunted house, a New England mansion called Hill House. To this day, the movie is considered one of the best horror movies in history. The screening is set exactly 55 years after its first release in 1963.

A cult movie that hardly needs an introduction, Fight Club is based on the 1996 novel of the same name written by Chuck Palahniuk. According to movie director Fincher, Fight Club, which some say features one of the best endings with a twist in cinematographic history, is a coming-of-age movie for 30-somethings. Brilliantly mixing humour to dampen the sinister aspect of the movie, Fincher successfully delivered an entertaining film that still manages to make us think.

Starring Terence Stamp, Samantha Eggar and Mona Washbourne, The Collector is based on the 1963 eponymous novel by John Fowles and tells the story of Frederick Clegg (Stamp), a young, lonely and disturbed man who stalks Miranda Grey (Eggar), a student of fine arts. One day, he kidnaps her, and as a butterfly collector, he treats her just like one of his specimens. The movie earned three Oscar nominations as well as two awards at the 1965 Cannes Film Festival for Stamp and Eggar.

This all-time classic is probably one of the best movies to end the festival. Lord of the Flies, based on the novel of the same name by William Golding, plays with the idea that hate, fear and violence are inherent to humans and can even be found in young children. Starring James Aubrey, Tom Chapin and Hugh Edwards, among others, the story finds a group of British schoolchildren marooned on an island after escaping the war in their home country. The boys are forced to start their lives from scratch and create a society. With an approval rating of 91% on Rotten Tomatoes, the movie was named one of the Top 10 Films of the Year in 1963 by the National Board of Review.

The festival also includes a surprise screening, which has now become a favourite of the faithful audience. Make sure to check the full program, and don’t forget the popcorn!