This Skate Bowl in Athens is Offering the City's Best Brunch 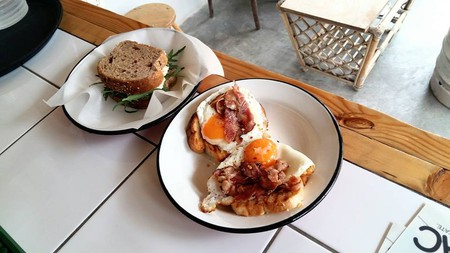 Greek breakfast has historically translated to coffee and a cigarette, but much like the city of Athens itself, the menu is changing. Latraac Cafe & Skate Bowl in the Kerameikos neighbourhood of Athens is one place leading a fresh take on the established norm, though shaking up the culinary offer is just a small part of the social impact the enterprise is having on the area.

As an area, Kerameikos was previously a more abandoned part of Athens, both socially and economically. In recent years, there has been an influx of a younger generation of creatives, which has seen the area start to shift into a cultural centre, along with the neighbouring Metaxourgeio area. It is within this context that Latraac put down roots in its current home.

Opened in April 2017, Latraac was founded by Zachos Varfis with the aim to offer a new space in the city that combined skateboarding, good food, gardening and design into one space. Realizing such a vision initially proved more complex than expected, and it was only when Zachos found an abandoned space in downtown Athens that the idea began to become a reality. ‘The space was a little bit smaller than what would have been ideal’ he explains, ‘but that was the fun part. Finding a specific location gives you parameters and a very specific context.’

Having secured the backing for the project from crowdfunding and private donations, the pair built the skate bowl almost entirely themselves, using Zachos’ background in architecture and 3-D modelling to create a design from plywood, which went together sort of like a jigsaw puzzle and was finished with metal work. Though the design for the skate bowl is modern, the space mixes the history of the area into the landscape too, integrating holistically while offering a contemporary vision.

While Zachos spotted the potential of the space from the beginning, there were unexpected revelations too. ‘What was nice was that when we rented the property, it was just gravel. Then through planting trees, we discovered that 10 centimetres underneath the gravel were all these tiles and marble slats from houses that were there from the 18th century. So that co-exists with the architecture and the design of the ramp and the cafe and tied it into the area as well.’

Located on Leonidou 63-65, visitors step through a metal grate into a small haven of chalky gravel, big wooden benches and beautiful greenery. The skate bowl takes up the back of the space, with the cafe to one side. The vibe is effortlessly communal, and it’s easy to while away an afternoon in the sun, watching skaters experiment with new tricks while enjoying a coffee and, of course, food from Latraac’s signature menu.

And though once you’re there the draw of Latraac is self-evident, as an enterprise, it is still in the process of navigating the tension between offering a free public space and running a business, as well as transcending preconceptions of skate culture as something on the periphery. ‘It’s going to take time for it to resonate and come back,’ Zachos notes, observing that the wider social impact of offering something different is always going to take time to process and disseminate beyond one community. In the evenings, the space often plays host to local DJs and live performances as well. Turn up at any time of day or night and you’ll find a vibrant and energetic atmosphere that suggests this wider resonance isn’t far behind.

For visitors looking for an alternative breakfast in Athens, Latraac is the ultimate destination. An all-day breakfast menu offers hearty brunch, which includes fried eggs on sourdough, pancakes and syrup, scrambled eggs and mushrooms on toast and a must-try Monte Cristo sandwich – all made with traditional Greek ingredients and offering a fresh twist on the classics. The emphasis on food complements the skate community, with both offering a sense of communality and a shared social experience. Open on Fridays, Saturdays and Sundays throughout winter and more often during the summer months, the best way to experience Latraac is to visit yourself.