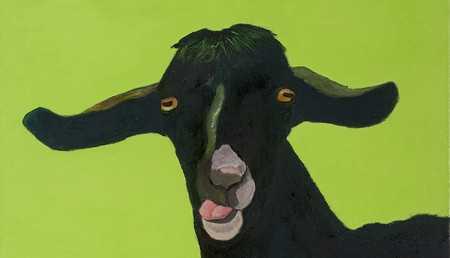 After his latest exhibition in Athens, Culture Trip caught up with Greek artist David Benforado to talk about the power of goats and their place in the history of Greek image making.

Greek goats might not immediately bring creative impulse to mind, but for one Athenian artist, the symbolism and mythical qualities of Cycladic goats proved the starting point for a philosophical investigation. Greek artist David Benforado’s latest work is a series of vibrant portraits of native goats. Through his paintings, the goats take on a more poignant position, inviting an emotional response that pushes beyond the immediate image.

The paintings are bright and impactful with a Pop Art feel. Each goat is given a name through the title, elevating the portraits to a more human level. Often these names are that of Greek gods, affirming the animal’s important status. These are not animals easy to dismiss. Their stares are captivating and compelling. Their eyes meet the viewer’s, offering something – an idea put directly in Benforado’s work entitled ‘Self Portrait as a Goat’.

Born and raised in Athens, David Benforado studied in America and then in Budapest before returning to his hometown after graduating. Goats and the Abstract Truth at the Kourd Gallery was his seventh solo exhibition. Culture Trip caught up with the artist to talk about the power of the goat and the Athens creative scene.

Culture Trip: Why did you become interested in these Cycladic goats?

David Benforado: Since my adolescence, I was observing goats from a distance on countless visits to the Cycladic islands, spanning over many years. The idea to start painting them came from a long stay at a friend’s house on Fournoi Islands during the summer of 2008 in the northeastern Aegean Sea. At first, I was impressed by their unique gaze. During the process, I realised that I had unearthed a missing link which fit an internal puzzle. The elements of this puzzle are connected with the physical geographical location; goats in the Cyclades constitute a picture which includes light, wind, sun, sea, iodine, oregano, thyme, capers, dry earth and sunburned rocks. I furthered my research during my two-and-half-year stay on the island of Syros in the Cyclades.

CT: What was the process of painting them? Did it happen all in one go or over a longer period?

DB: Three years ago I started talking with Kourd Gallery about developing an exhibition solely with goats, so the paintings in the exhibition Goats and the Abstract Truth were all created within two to three years of intense work. It has taken me 10 years to fully develop the concept and approach to painting these goats. Almost all of the goats are based on my personal research and image archive from visits to Fournoi Islands, Syros, Tinos, Kea, Crete, amongst others. 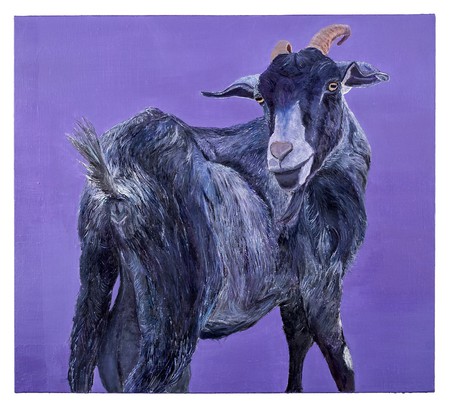 CT: What made you want to paint them as portraits rather than in natural landscapes, or as a herd?

DB: I wanted to make a direct reference to the serial art processes in Pop Art, hence the decision to combine portraits on brightly coloured backgrounds. I also wanted to create a body of work in which the viewer is confronted with the gaze of the goats in a physical space out of the pen and into the gallery. The identity of the goats as animals belonging to a herd and being one with the earth is so closely intertwined, so I wished to remove this element and focus on them in the same way I would if I was to paint a person’s portrait. 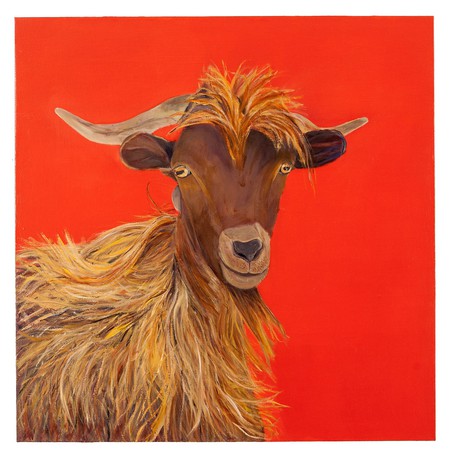 CT: Your portraits have human names as titles. Why was it important that the goats had a sense of personality?

DB: The human names are given in order to imply something particular about their personality and as a reference to myths in ancient Greek mythology, such as Amalthea, Cassandra, and Hekate, but also to lighten the subject with a dose of satire and humour as in the cases of the paintings ‘Europe’, ‘Lucy’ and ‘Andy’. 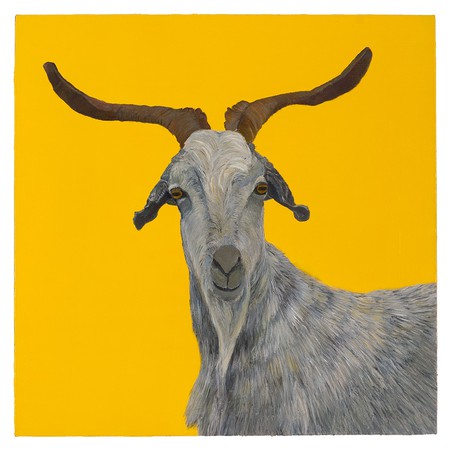 CT: What is the importance of the goat in the history of Greek image making and narratives? Did this influence the approach to your portraits?

DB: This was, in fact, one of the challenges – to strip the strong folk and mythological essence and narrative and to approach the goats in another light. It was hard to enter in this frame of mind. Often I became a goat myself in the studio looking for a trait to bring forth from each of the subjects. In ancient Greek mythology, the goat Amalthea holds an important place as it nourished, hid and protected Zeus when he was an infant from his child-eating father, Saturn (Kronos). The origins of the words tragedy (τραγωδία) mean ode to Tragos (male goat) and song (τραγούδι), the song of the goat. 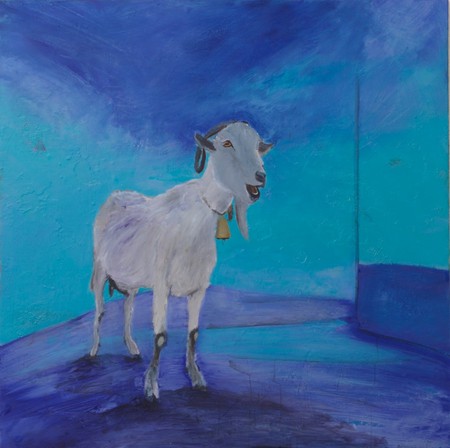 CT: What were the influences around the colours you chose as backgrounds? 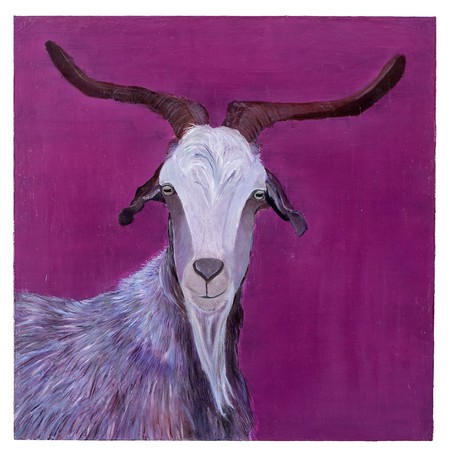 CT: Your show in Athens is titled Goats and the Abstract Truth. What truth do you want viewers to take away?

DB: Goats are proud, curious, courageous and resilient animals which carry their own abstract truth with their immediate connection to the earth, light and sea, and in their way of being, they remind us of our very own inextricable link to them throughout the centuries. 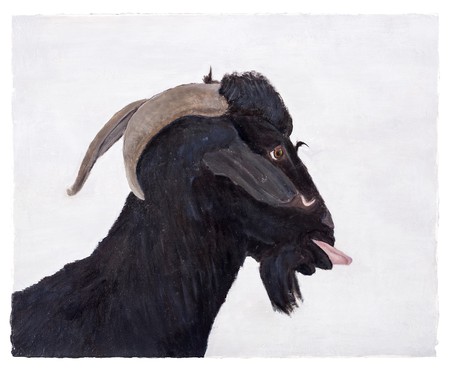