The Charity Using Skateboarding to Help Refugees in Athens 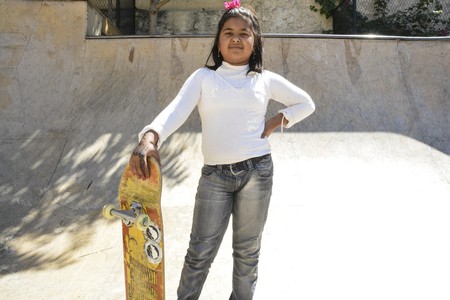 “Skateboarding is not limited to a skatepark or a certain place – searching for spots or just cruising around is the perfect way to explore and meet new people. Because of this, skateboarding can be a powerful tool for natural integration. It seems to dissolve all barriers of class, sex, gender, race,” explains Ruby Mateja, co-founder of Free Movement Skateboarding in Athens.

Along with her co-founder Will Ascott, Ruby launched Free Movement Skateboarding in Athens just over a year ago. The organisation sought to solve the challenges of building positive new communities which included both Greeks and refugees. Skateboarding provided a positive and exciting new route to building friendships and creating an integrated new future in the city. 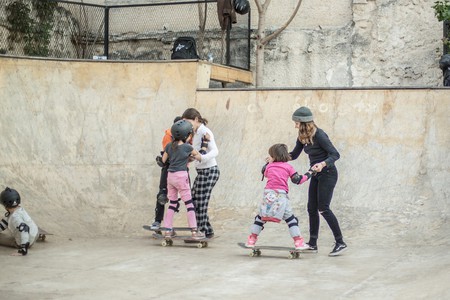 Ruby’s first foray into the skate world began in Bristol. Later she travelled to Palestine to work for the charity SkatePal, and it was here she met Will. “It was in Palestine that I saw how incredible skateboarding can be at dissolving harmful stigmas surrounding gender and race, and how it can provide a creative and inspiring outlet for kids living in tense and war-torn environments.” Inspired by the power of skateboarding, the pair looked to bring the same healing power to Athens.

The effects of their initiative so far have proved to be extremely effective, with young people from both central Athens and from refugee camps outside of the city joining in and engaging with their sessions. Most recently, Free Movement Skateboarding collaborated with Kassandras, Endboss Projects and Souzy Tros Art Canteen, run by Maria Papadimitriou, to re-open a ramp in Souzy Tros’s space. Located near to one of the camps that Free Movement Skateboarding teaches in and close to another venue, Latraac, the new ramp is a free place for young people enduring crisis and suffering from trauma to come together, build confidence and learn new skills.

Culture Trip caught up with Ruby to find out more about Free Movement Skateboarding, the successes of the organisation and their plans for the future.

Culture Trip: What was it like when you first started the organisation? Was it easy to get people interested?

Ruby Mateja: Yes, I think we’ve been quite lucky with the timing of everything. Skateboarding in recent years has transitioned from its previous counter-cultural status and now resides firmly in the mainstream. For us, it has been very helpful; many non-skaters now understand the great impacts that skateboarding can have – in psychological, physiological, and sociological terms. Because of this, our support has stretched far outside of the skate world. Skateboarders, in general, are highly supportive, and we have managed to gather most of our equipment to date solely through donations. In fact, we’ve had to stop accepting boards because we have so many now!

What surprised us most, though, was the support we gained from people who are not involved in the skate world at all. We had ourselves all geared up for explaining the various benefits that skateboarding can have, especially, we believe, for kids who have gone through periods of trauma and stress. But people seemed to get it straight away – it was amazing, and a really nice affirmation for us that we were embarking in a worthwhile direction.

A large majority of the kids had never heard of skateboarding before, let alone ever tried it, so they were intrigued and super excited to learn this new activity. At first, the number of girls participating was significantly smaller than that of boys, but over the course of the year we’ve been teaching, we have seen these numbers almost completely even out. We now have 45% female attendance at our workshops overall, and in one camp, we have more girls skating than boys! These sorts of statistics are unheard of in the Western world of skateboarding – but things are changing. Seeing so many girls get involved in our workshops and watching their confidence grow on and off of the board is truly wonderful. 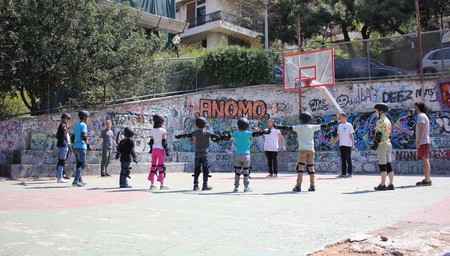 CT: What were the first kind of events and classes that you ran? How have these developed?

RM: Once we had arrived in Athens, we went about forming relations with other youth projects operating in refugee camps and community centres throughout the city. We established a close relationship with Khora Community Centre, who we started our first workshop with back in April 2017. This workshop started with just a few kids from the centre in a local basketball court, and it now averages on 20 people every session, who come from different community centres and squats. Local Greek kids now attend regularly too.

We now teach eight workshops a week, five days a week, in refugee camps and public spaces in the city. These workshops are attended by 45% girls, 16 different nationalities, all different ages. As well as our weekly schedule of workshops, we also host community days at the local skate bowl, Latraac. These days are open sessions, so anyone from the community can come along and learn to skate with us. And we bring kids from the camps to join as well.

CT: Does it feel that skateboarding has more power to bring people together than other sports, and if so, why?

RM: I think any team sport can be really effective in bringing people together. Physical activity is such a liberating thing, and when done with others, strong bonds can easily be formed.

Skateboarding has the edge in many ways though I feel – for a start, it’s a non-competitive activity, which means that whatever level you’re at, the only person you’re competing with is yourself. Everyone supports each other, no matter what trick you’re learning or if you’re just learning to push. When you are skating together, you are all just skaters. It is an incredibly freeing feeling. 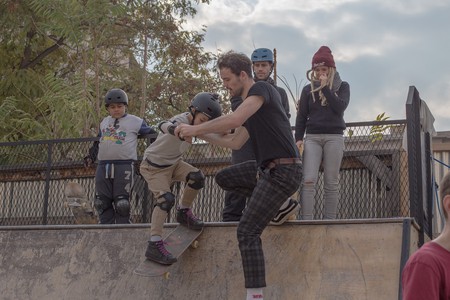 CT: Through the work that you do and your experience of running the charity, does it feel that Athens is still in the midst of crisis, or is there a sense of recovery and integration?

RM: Having only been there for a year, it is quite hard to tell. I think the situation has settled slightly from the emergency state it was in a few years ago. The same cannot be said for the islands though. Although a lot of people are being housed now, there are still large amounts of people arriving all the time.

In general, it is impossible to ignore the crisis, because it is apparent everywhere. But the Greek locals are mostly very supportive – and there are many things in place to help encourage integration and to promote a dignified lifestyle for the migrants living there. The situation is harsh, but people from all over the world are coming together to try to improve it. Volunteers often work six days a week providing education, legal support, psychological support, and recreational activities.

CT: What are you most proud of having achieved through the organisation?

RM: Personally, I am very proud of introducing skateboarding to so many girls, and to see them take it up with such enthusiasm. Seeing them take up skateboarding and gain the physical and mental release from it is especially pleasing. You see their faces light up as if they’re experiencing something they’ve never felt before. 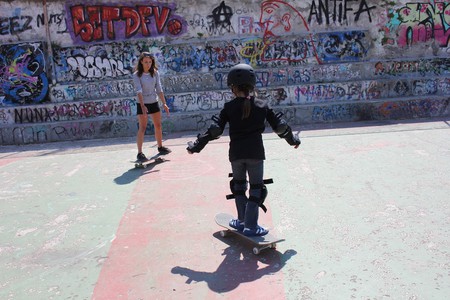 CT: Where are the best spots for skating in Athens?

RM: Syntagma Square at night is a fun and lively spot. People stream through the centre of the square, whilst others sit around – still drinking Freddo espressos – watching all the skaters, dancers, and musicians do their thing. In general, Athens is pretty perfect for skating; the glossy roads sparkle under the intense summer sun. You can weave in and out of honking cars whilst skating between the various marble spots which no one ever kicks you out from.

CT: Looking ahead, what do you perceive to be the biggest challenges, and what are you most excited about?

RM: Our biggest challenge currently is an attempt to become self-sufficient and sustainable in terms of financial backing and staffing – with an aim to expand our outreach within Athens and to other places. We have been approached by projects on a couple of Greek islands and also in Thessaloniki, so we hope to be in a position where we can expand within the next couple of years.

I am most excited about building our own skatepark in central Athens – which we are hoping to do at the end of this year through our partnership with The Community Collective, who have built skateparks in deprived communities all over the world. The skatepark will allow us a safe and secure place to host our workshops, promote integration, and host female-only sessions for the older girls and women who find comfort in learning in a private space.