Seaside, Souvlaki and Sandals: The Best Things To Do in Athens 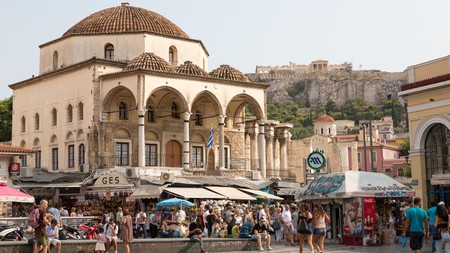 From exploring the riches of the Acropolis Museum and a burgeoning third-wave coffee scene to walks on the beach, Athens has no shortage of activities to help visitors fill their itinerary.

When you think about Athens, chances are you picture one thing: ancient ruins. Truth be told, they deserve the limelight. But when you arrive in the Greek capital, you will quickly realise that beyond the ancient monuments lies a dynamic metropolis, bursting with creativity, tempting street food and even hiking opportunities.

Follow in the footsteps of the St Paul the Apostle

One of Athens’s most stunning walks starts from the Thissio metro stop – stroll along the charming pedestrianised Apostolou Pavlou Street on the edge of Filopappou Hill, continuing on Dionysiou Areopagitou Street until you reach Hadrian’s Arch, which is the gateway to the magnificent Temple of Olympian Zeus. Apostolou Pavlou Street, named for St Paul the Apostle who walked the same route in AD 51, offers jaw-dropping views of the Acropolis Hill. The route will take you past the entrance to the Acropolis, and later by the Odeon of Herodes Atticus. Take a moment to appreciate the Neoclassical mansions of Dionysiou Areopagitou Street, which has been home to some of the most important Greek artists and politicians. Pause in front of the glass facade of the Acropolis Museum, designed by architect Bernard Tschumi, to get a sense of how ancient history and contemporary design have found a common home in Athens. 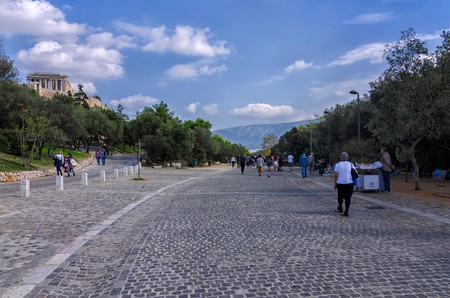 Hike up to the Acropolis

Although you can see it from nearly every corner of the city, the Acropolis needs to be experienced up close. Start early in the morning to avoid crowds and long queues – a light hike from the Plaka and Monastiraki side of the Acropolis Hill up to the Parthenon is a great way to begin a day in Athens and beat the heat, taking in picturesque woodlands and unrivalled views across Athens as you ascend the hill. If you can, visit in spring, when the wildflowers are in bloom. 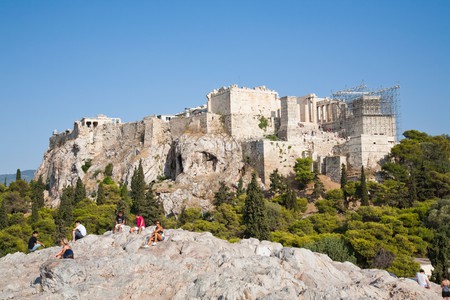 As you might expect, Athens is flush with historical museums. No trip to the Greek capital would be complete without a visit to the Acropolis Museum, which invites you to discover and examine in detail the protected treasures of the Acropolis. To get a sense of how the structure would have looked in its heyday, visit the museum’s Parthenon Gallery, where you can walk around a simulation of the temple. Equally impressive is the National Archaeological Museum. Stand in front of the Artemision Bronze – an Ancient Greek sculpture thought to date to around 460 BC – and try to discern whether it is Poseidon or Zeus. Though it is widely believed to be Zeus, there is debate about whether the object held in the sculpture’s right hand was a thunderbolt or a trident, and therefore which of the Ancient Greek gods it was meant to represent. Here, visitors can also admire the Antikythera mechanism – the world’s first computer – and see their reflection in the golden mask of Agamemnon. Beyond ancient history, some of Athens’s more unusual but no less fascinating museums include the Museum of Greek Folk Musical Instruments and the Ilias Lalaounis Jewellery Museum, which once served as the workshop of the internationally famed goldsmith of the same name. 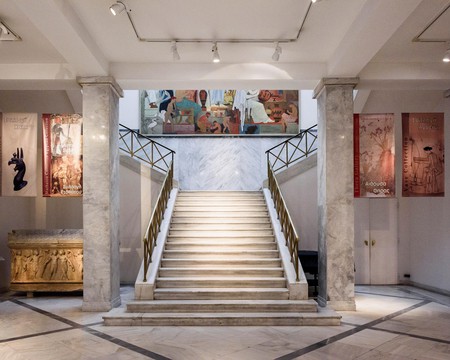 Scout out fresh produce at the market

On any given day in an Athenian neighbourhood, you’re bound to come across a laiki agora, Greek for ‘people’s market’. Perhaps more aptly described as a farmer’s market, here you can find seasonal produce straight from local farms – fruit, vegetables, cheese, honey, olives and more. The laiki every Saturday on Kallidromiou Street in Exarchia, not far from the Archaeological Museum, is the best for people-watching thanks to the trendy young crowd that frequents it. 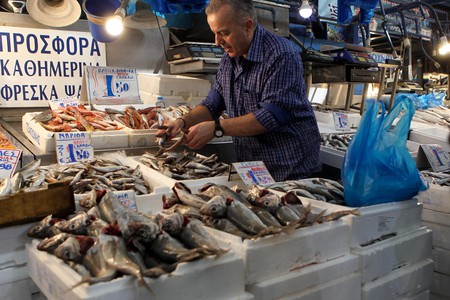 The kafenio – a traditional café and Greek social institution typically frequented by elderly men sitting for hours discussing politics and playing tavli (backgammon) – is alive and well in Athens, with some of the most popular including Captain Michalis and Mouria (the perfect coffee stops after visiting the Kallidromiou Street Market). Athens is also home to a burgeoning third-wave coffee scene, arguably spearheaded by Taf Coffee in Omonia. Right in the middle of the downtown historic triangle, you will find Anana Coffee and Food – a haven for both coffee lovers and vegetarians. Choose to sit in front of the large windows to watch the city pass by, or look up and admire the Modernist architecture in the atrium at the back of the café. If you can’t decide what to get, plump for a flat white and a slice of vegan carrot cake. 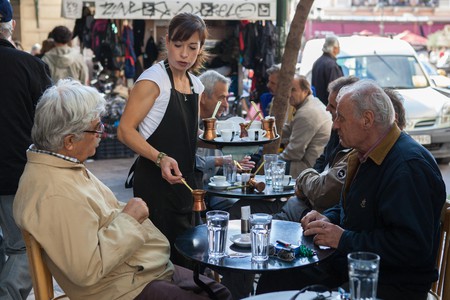 Hit the beach on the Athenian Riviera

One of Athens’s key selling points as a city break destination is its proximity to the seaside, meaning you can combine exploring Ancient Greek history with a beach break. Beyond the popular beaches of Glyfada, Voula and Vouliagmeni, the southern tip of the Athenian Riviera holds a well-kept secret: KAPE Beach, set just west of Sounio. Like all things worth your while, it takes a bit of effort to get here. After an hour’s car ride along the Attica shoreline, you’ll reach a blink-and-you’ll-miss-it dirt road with a faded sign pointing to your right. If you hit the village of Legrena, you’ve gone too far. A few minutes later, you’ll see a small canteen where you can stock up on drinks and snacks before you walk down 100 steps to get to the beach. Athenians say this beach is like being on a Cycladic island – and it’s easy to see why. 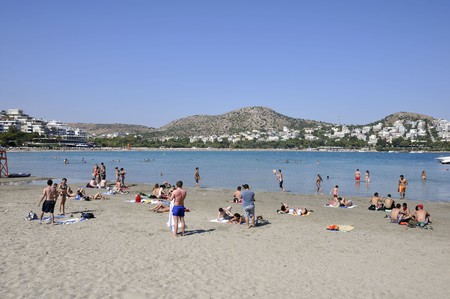 Almost everyone in Athens seems convinced that they know the very best souvlaki in town, making it difficult to know where to go for this quintessential street-food snack. If you’re short on time and need a solid souvlaki recommendation, O Thanasis in Monastiraki and O Kostas near Syntagma are great places to start. To enjoy fresh fish on the go, head to Zisis for fried fish in a cone or to Poké Hawaiian Sushi for colourful amberjack with red chillies and coriander. While you can find home-baked pies in most of Athens’s plentiful bakeries, stopping by Ariston near Syntagma for a kourou dough cheese pie is never a bad idea. 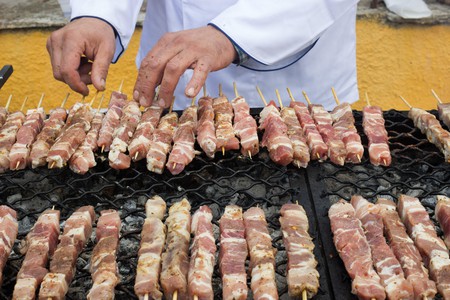 Souvlaki is a popular Greek fast food consisting of meat grilled on a skewer, and often served in a pita bread | © BasilT / Alamy Stock Photo

In downtown Athens, bars to satisfy every mood abound. Head over to Baba Au Rum, voted one of the world’s 50 best bars, to order the signature umami daiquiri – made with vanilla, sweet sherry, oak, lime and basil. Taste the best wine Greece has to offer at Heteroclito, a small wine bar that extends to the street overlooking the Athens Metropolitan Church. Finish the evening at the all-time classic late-night hangout Seven Jokers, which is known for draught beer and its extensive spirit selection. To mix nightlife and history, hit up Brettos – the Greek capital’s oldest bar and distillery, dating back to 1909. 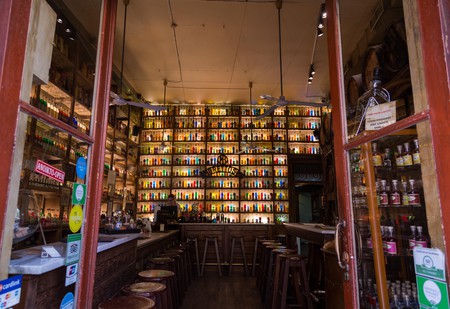 Nothing says I’ve been to Greece like coming home with a pair of Ancient Greek-style sandals. Inspired by the winged sandals of Hermes, son of Zeus and messenger to the gods, local brand Ancient Greek Sandals has been taking the world of footwear by storm with its take on this classic shoe, handmade by local craftsmen using traditional techniques. In March 2019, the brand opened its flagship store, which is designed to look like a 1960s hotel – an homage to the downtown Athens building’s past life. 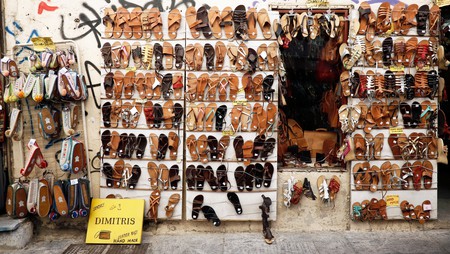 Mingle with the international art crowd

In spite of the economic crisis in Greece – or perhaps because of it – in recent years Athens has seen the growth of a dynamic art scene. In addition to longer-established galleries such as State of Concept and Ileana Tounta Contemporary Art Centre, at the centre of the scene is Hot Wheels – one of the city’s hottest galleries, set up by a London-born art professional in a Neoclassical townhouse. Hugo Wheeler moved to the city in 2017 and opened the gallery to showcase young Greek artists. The gallery opening nights are the talk of the art crowd; if you make it to one, climb the metal spiral staircase to the rooftop and take in incredible views of the city.