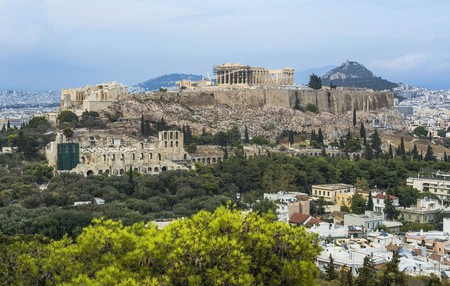 From its days of glory to the hard times of demonstrations and tear gas, Athens has always provided artists with the best material. Like all big cities, Athens bears many faces: small corners with bars, classic taverns, crowd-filled streets, historic monuments, glamorous dining, and alternative haunts. Through its love and violence, Athens has inspired Greek and international composers and singers abound, who found one more way to praise their beloved city through these six songs. 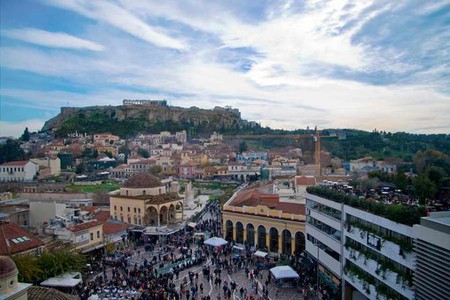 Sofia Vembo was a great Greek artist who stood out in the music and theater world from the interwar period through to the early postwar years and the 1950s. She became best known for her performance of patriotic songs during the Greek-Italian War, when she was dubbed the ‘Songstress of Victory’. At that time, Athens was turning into a big city center full of lights, labels, shops and life. Everybody’s dream was to reach the capital to chase better opportunities. That is why Sofia was singing this song, comparing her precious Athens to other big, European and American cities.

‘London, Paris, New York, Budapest, Vienna. No one of you can compare to Athens. Because its dress is always full of roses and white laces hug its seashores. You are inhabited by Gods, you heart-breaker Athens! They come down to Plaka to drink wine. And totally drunk, late at night, passing by each column, they go sleep in the Parthenon.’

Belinda – “The Tango of Athens”

Belinda was also famous and adored in post-war Athens when the first big music halls and theaters appeared and hosted important artists of that time. An old style, nostalgic sound characterises this period and carry us to nights of elegance and passion; beautiful ladies and charming gentlemen danced to the rhythm of tango in the capital that began to accept foreign infuences in its way of entertainment. Still, as Belinda says, even the dance of Argentina tastes better in this city.

An award-winning Greek composer and a great Greek poet united their talents to create this song. Manos Hatzidakis and Nikos Gatsos hold a special place in Greek music and in everyone’s heart. This tribute to Athens has been covered by many important singers. This version with Dionysis Savvopoulos in the Odeon of Herodes Atticus, a stone theatre located on the southwest slope of the Acropolis, was part of a concert dedicated to Manos Hatzidakis and reflects all the beauty that the lyrics describe.

Who could be more appropriate to sing about a lost love in the streets of the town than an old rocker? Vasilis Papakonstantinou is a beloved singer of young and also of older people. Whether you like this kind of music or not, it is impossible not to notice his special voice and the fact that he has remained original. Many people have spend nights crying to this song that reminds them all the beautiful parts of Athens where they experienced the big loves of their youth.

‘It is so cold tonight that it makes me sick and I am lost in the streets of the town. You are sleeping on a sea covered in foam. And I am drowning every day in the land. I look for you in Leoforos and Victoria. And I pass by our old haunt. You know very well that I have no more limits. I know very well that I will go crazy if I don’t find you.’

Times change. For modern Greek singer Elli Paspala and the Greek Latin group Apurimac, Athens has become suffocating. The most fascinating thing about this song are its lyrics. Although the artists sing in Spanish, all the words they use have Greek origins and can be understood by a Greek person even if he or she does not speak Spanish at all. Words with a universal meaning express the melancholy among the streets of the city and present the concept of being human as our only hope .

The last years of economic crisis have changed the way of life in Greece. The people of the capital were the first to feel these changes and expressed their anger in big demonstrations against austerity measures. The famous Australian singer Nick Cave wrote a poem about the situation in Athens; a dark hymn with sounds of synthesizer in the background. In difficult times Athens still inspires international compassion, while its youth is still trying to stand up and face the future with power and hope.

‘In Athens all the youths are crying from the gas. I’m by the hotel pool working on a tan. People come up and ask me who I am. I say if you don’t know, don’t ask. Zeus laughs – but it’s the gas. And he asks me how I am. I say Zeus, don’t ask.’