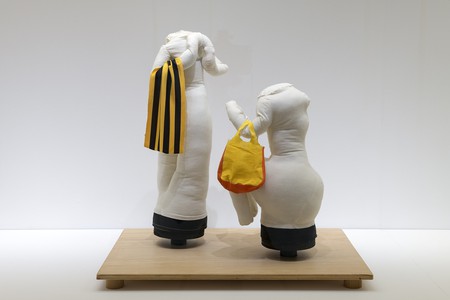 Those who are familiar with Cézanne and Matisse may find themselves taken aback when they encounter the latest work of Paul Chan in his exhibition Odysseus and the Bathers.

Far from the traditional pastoral scenes that are evoked by the exhibition’s title, the New York-based artist has conjured a bright and minimalist series of kinetic sculptures at the Museum of Cycladic Art in Athens.

For the new works, the artist drew inspiration from Ancient Greece. This was not only through the titles of his work, which play on the names of characters from The Odyssey, but also through an exploration of the characteristics of the protagonists.

Abstract and enigmatic, Paul Chan artfully brings the philosophical tethering of Ancient Greek thought to a modern and relatable new setting. Odysseus’ drive to return to his home after the Trojan War, and the way in which he navigates the journey, becomes a poignant metaphor for contemporary experience. 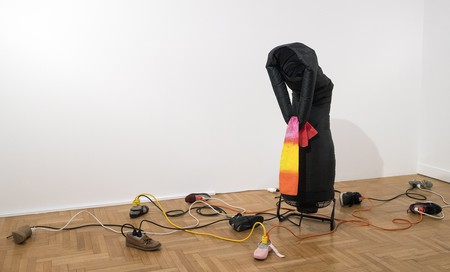 The title of the exhibition was inspired by an essay Chan wrote, ‘Odysseus as Artist’, in 2017 which explored the idea of ‘polytropos’. This is a word that appears in the first line of The Odyssey and, according to the translation you favour, means cunning, wiliness or inventiveness.

This characteristic formed the starting point for the new exhibition and also offers a point of entry to Paul Chan’s work. As guest curator of the exhibit, Sam Thorne posits in his curatorial essay that Chan’s work asks:

‘Is it possible to broaden the terms for contemporary art by thinking through the notion of cunning as manifest in Odysseus? And can cunning be re-described as a way of thinking and doing that raises the stakes for why art ought to matter today?’

The existential element invites audiences to consider the role of art in the modern contemporary space. This idea can also be seen through the movement of Chan’s works, which embody a dexterity and a sense of life as well. 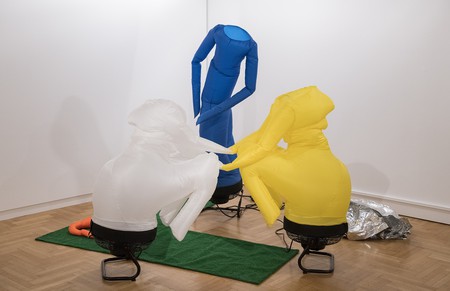 Visitors will encounter a series of brightly coloured sculptures in a variety of sizes, as well as painted stretched canvases.

These kinetic sculptures harness the idea that, as Chan inferred from Ancient Greeks such as Heraclitus, there is a clear and powerful relationship between life, consciousness and movement.

In approaching the exhibition, Chan looked to evolve his previous series of work entitled The Breathers. Here, these same breathers are rendered as bathers, with brightly painted canvases stretched out like beach towels with Matisse-esque prints to convey this new setting.

While the original bathing scenes of the 19th century may have evoked Eden-like pre-fall innocence, here, Chan encapsulates modern bathers constantly living on the periphery of trauma. A beach scene has dual connotations of both leisure and the refugee crisis, as denoted through the use of a silver foil recovery blanket in Chan’s motifs. 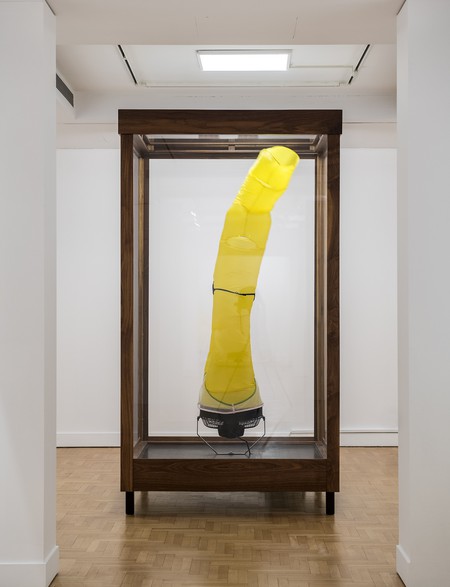 The sculptures are presented both together and in isolation. They are given names such as Polypelope, a play on the name of Odysseus’ wife, Penelope, and Poordysseus. The latter sits as the final sculpture of the exhibition and the name, ‘Poor Odysseus’, is rendered through the lonely sculpture that lingers, seemingly downcast and alone, in a wooden stand.

The world that Chan creates is both familiar and unnerving. Audiences might experience Odysseus and the Bathers as if undergoing a journey themselves. The solitary Odysseus in his lonely stand is both a reminder of the past and also a call to visitors as they leave to rely on wit and cunning for themselves – how else to impress the goddess, and the city of, Athena.

Paul Chan | Odysseus and the Bathers is at the Museum of Cycladic Art in Athens until October 14, 2018.