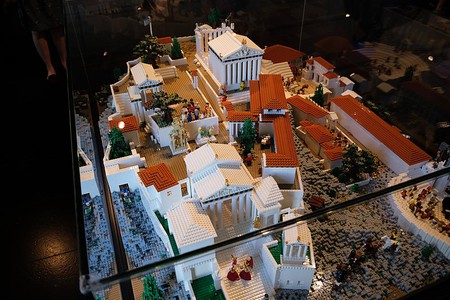 It may be one of the most popular archaeological sites in Europe, but as it turns out, the Acropolis’ attraction isn’t only its ancient history. There’s also a LEGO version in Athens to visit.

Created by Australian model-making enthusiast Ryan McNaught, the LEGO version of this famous Athens site is almost as popular as the real thing.

The recreation took McNaught over 300 hours to build and consists of 120,000 LEGO blocks. Such a labour of love has seen the model take centre stage in the Lab section of the Acropolis Museum, where it has enjoyed a home for the past four years.

The University of Sydney’s Nicholson Museum donated the LEGO recreation to the Acropolis Museum after it racked up an impressive 100,000 visitors in Australia.

Ryan McNaught’s creation blends the fictional and the factual. The impressive feat includes all of the Acropolis’ temples and theatres as well as more maverick additions. Intricate scenes featuring Lord of the Ring’s Gandalf arriving at the Acropolis may not please historians, but it does add to the sense of legend and fantasy that surrounds the ancient site.

Other scenes are more reflective of classical Greek history. Visitors who look closely will see Theseus, who later went on to become King of Athens, defeating the fabled Minotaur, Alexander the Great (who came a century afterwards) chatting with philosophers, and a performance of the highly influential Oedipus Rex in the theatre of Dionysus.

Also on show are historical figures who played a more contemporary role in the history of the Acropolis. Most notable of these is Lord Elgin, the British archaeologist who famously removed the Parthenon marbles and placed them in their current home in the British Museum. As highlighted in the LEGO display, this is an issue which remains contentious even today. Elgin’s inclusion in the LEGO depiction reflects the spaces left by the museum in their recreation of the Parthenon relief on the top floor.

A lighter nod to contemporary life comes through the inclusion of a souvlaki van, featuring many happy customers queuing up to enjoy this famous Greek dish. Of all the scenes depicted in Ryan McNaught’s LEGO version, this is by far the one that visitors to the Greek capital are most likely to witness as they explore the rest of the city. There are plenty of souvlaki places in Athens to experience firsthand.

Having enjoyed a highly successful run throughout the past four years, the display of the LEGO Acropolis is set to finish at the end of 2018. For LEGO-loving visitors looking for an alternative experience in Athens, this is a must-visit on your trip. With any luck, you might even bump into Gandalf.