Discover the Athens Art Scene with a Local Expert 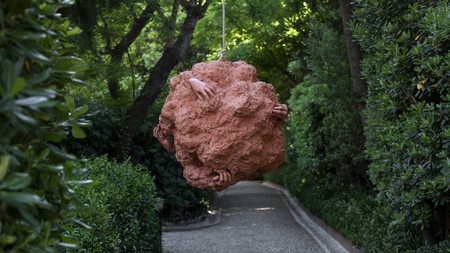 Athens art historian and curator Evita Tsokanta offers her take on the Greek capital’s art scene – from the most exciting emerging artists to the city’s hottest art venues.

With established museum collections and grassroots artist-run spaces, featuring works by Monet, Picasso and emerging local artists, the Athens art world is as diverse as it is dynamic. You’re bound to find what you’re looking for or, better yet, what you never knew existed. Local art historian, independent curator and educator Evita Tsokanta gives the inside track on the Greek capital’s evolving art scene, which, despite the financial crisis, is flourishing.

The Athens art scene is remarkable in its duality: cutting-edge contemporary art spaces exist side-by-side with the city’s iconic ancient architecture and established museums. Underpinning this dynamic creative landscape is a strong community of artists, curators and artistic foundations, championing the arts scene in its diversity.

While Athens awaits the much-anticipated re-opening of the renovated National Gallery, the Basil and Elise Goulandris Foundation is a fitting stand-in. One of the most important private collections assembled in the second half of the 20th century, the B&E Goulandris Collection includes works by international artists such as Cézanne, Monet, Picasso, Van Gogh, Chagall, Rodin and Miró, which are on permanent display alongside Greek masters of the same era such as Tsarouchis, Moralis, Parthenis and Bouzianis. The expansive 11-storey museum also houses a charming café-restaurant, shop and art library as well as an auditorium for concerts, plays and discussions. Yoga classes take place in the galleries among the artworks, while young adults can take place in bookbinding workshops. 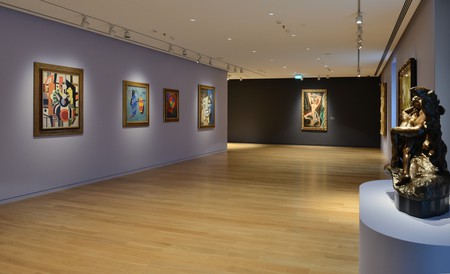 The Basil and Elise Goulandris Collection includes works by international artists such as Cézanne, Monet and Picasso | © Christoforos Doulgeris

Neon Foundation, meanwhile, brings contemporary art to wider audiences by producing free exhibitions throughout the city in various and often unexpected public spaces. Neon has staged, for example, exhibitions by Argentinian artist Adrian Villar Rojas at the National Observatory and Tino Sehgal at the Roman Agora, while in 2019 the foundation collaborated with the Museum of Cycladic Art for the exhibition of pioneering American sculptor and visual artist Lynda Benglis. 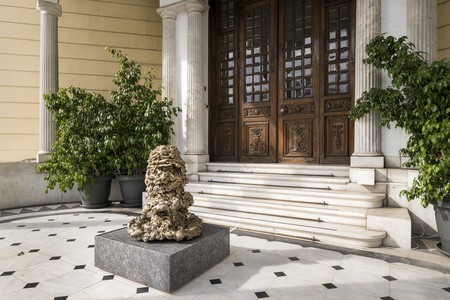 The Greek capital’s expanding art scene is evidenced by the remarkable number of new mid-size, independent, non-profit exhibition spaces that have been popping up across the city over the last five years or so. With free admission, these galleries stage shows by both Greek and international artists and curators, set across a diverse range of Athens neighbourhoods – revealing the many colours of the city, beyond the centre – and many in unique architectural venues. ARCH, located near the Arch of Hadrian in Plaka, epitomises the meeting of past, present and future that so characterises Athens; this renovated 1930s Art Deco building now houses a state-of-the-art gallery and studio, while visitors should make sure to enjoy the outdoor patio space while browsing a book from the on-site art library. 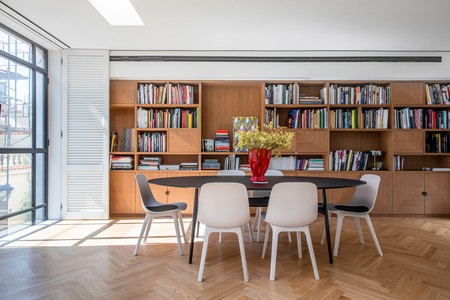 The Intermission in Piraeus, meanwhile, focuses on curated exhibitions of artworks by internationally acclaimed artists, with featured names including John Knight. Between warehouses and smitheries, and set next to the commercial gallery Rodeo and the atmospheric Paleo wine bar, the renovated former industrial space has created a new creative hub near the city’s port. 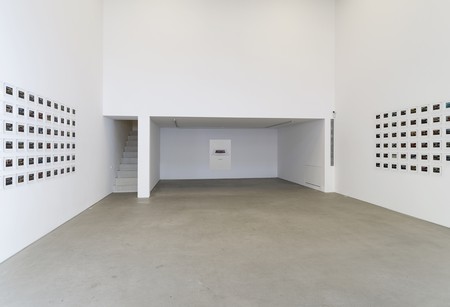 Elsewhere, after operating nomadically for many years, local curatorial duo Locus Athens opened their permanent location – Tavros – in October 2019, named for the neighbourhood in which it is situated. A primarily residential area in southwestern Athens, Tavros was initially populated in the 1920s by refugees from Asia Minor during the population exchange between Greece and Turkey. Social housing from this era can be seen from the Tavros gallery, which occupies the first floor of a building predominantly used by small scale fabric crafts industries. Fittingly, Tavros’s mission is to act as a “democratic space dedicated to embracing and enriching relationships with the local community and creating a space for marginalised voices” through exhibitions, educational programmes, talks and community projects. 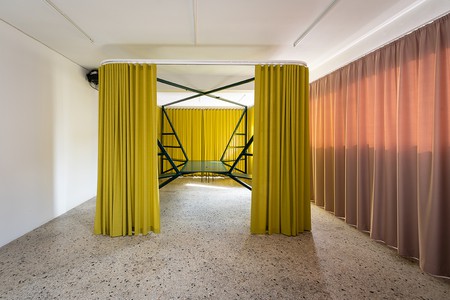 A few steps away from crowded Monastiraki, Haus N Athen sits on the second floor of a former clothing manufacturing building, above an old shopping arcade. Established by German collector Peter Niemann, who also created Sammlung Haus N in northern Germany, but run by Greek artist Amalia Vekri, Haus N Athen is a platform for collaborations between artists and curators. Here you can find performances, screenings and publications showcasing the most cutting-edge art in the city. 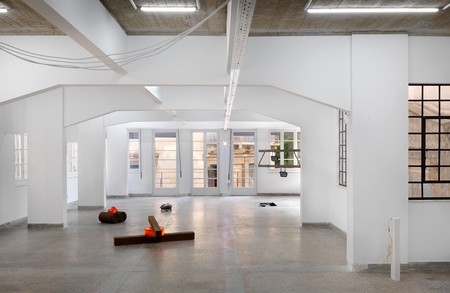 In the past decade, the backbone of the Athens art scene has been the multitude of artist-run spaces that have been employing DIY methods to energise the artistic production of the city even through difficult times. 3 137 in Exarchia, A-Dash on the side of Lycabettus Hill, Enterprise Projects in Ampelokipoi and Snehta in Kypseli – to single out just a few – have formed a robust system of grassroots organisations, periodically staging exhibitions and events that offer an authentic experience of what it means to be an artist in Athens today. A-Dash, which is housed in a listed neoclassical house and financed via crowdfunding, is run by four female artists and offers particular insight into life for women in the Athens artistic community. 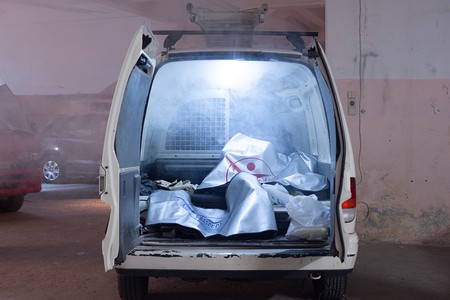 Enterprise Projects is set in the Ampelokipoi neighbourhood | © Stathis Mamalakis

Such a vibrant artistic community cannot do without its commercial galleries. Eleni Koroneou Gallery in Ano Petralona has been exhibiting artists such as Martin Kippenberger, Christopher Wool and Helmut Middendorf since 1988. Only a five-minute walk away is Bernier-Eliades, which opened in 1977 with a Jannis Kounelis show. Since then, it has built a roster of historic and contemporary artists from around the world, including local standouts Rallou Panagiotou and Kostas Sahpazis. A few years ago, Bernier-Eliades opened an additional space in Brussels. 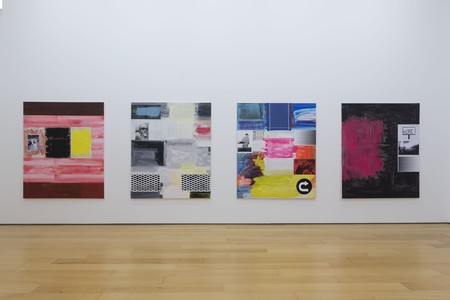 Kalfayan Gallery in Kolonaki promotes contemporary art locally through its exhibition programme and internationally by continuously participating in art fairs such as Art Basel and Frieze. In the same neighbourhood you can visit a younger generation of commercial galleries, such as Eleftheria Tseliou Gallery – set in a typical Athens apartment space – and CAN gallery, where you can experience the newest in Greek painting and sculpture. Finally, Hot Wheels Athens, just across from the Polytechnic School, founded by London-native Hugo Wheeler, is a must-visit destination for experimental projects by young creatives. 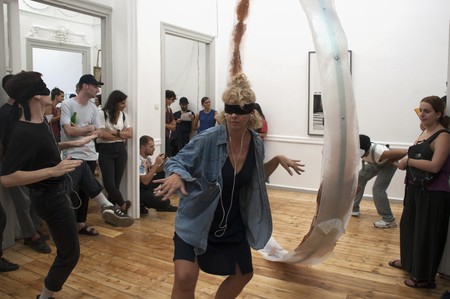