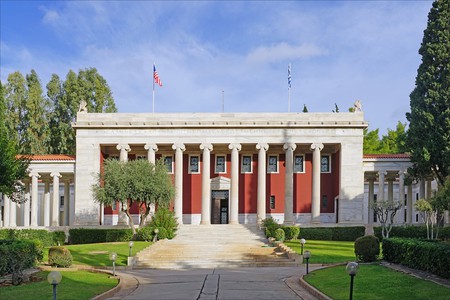 Besides its wealth of ancient jewels, Athens also has a vast collection of neoclassical architecture gems dotting the city. Born in classical Greece, exported to Europe and reintroduced in the modern Greek state at its infancy, Athenian neoclassicism gives the Greek capital a unique style that makes it stands out. Here are some of the most striking neoclassical landmarks to visit in Athens, Greece.

Located in Thisseio, the National Observatory of Athens is an often forgotten example of neoclassical architecture. Set in the Hill of the Nymphs, the observatory’s main building was designed by Danish architect Theophil Hansen and funded by Georgios Sinas, a Greek ambassador in Vienna. The cross-shaped building was inspired by ancient classical temples, and the four wings are oriented towards the cardinal points, with a small dome to house a telescope in its center. Completed in 1846, the observatory is Greece’s oldest research association and is open to the public. 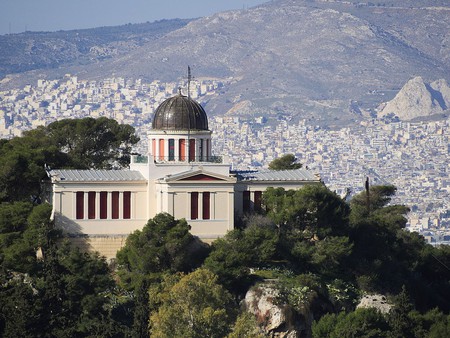 Academy of Athens, a well-known neoclassical gem in downtown Athens, is part of the architectural trilogy designed by no other than Theophil Hansen, who also designed the Austrian Parliament Building and the Musikverein in Vienna. Designed in 1859, the Academy is considered to be Hansen’s main achievement and was strongly inspired by the Athenian classical architecture of the 5th century BC. The building features intricate sculptural and pictorial decorations, showcasing the original character of Hellenism. 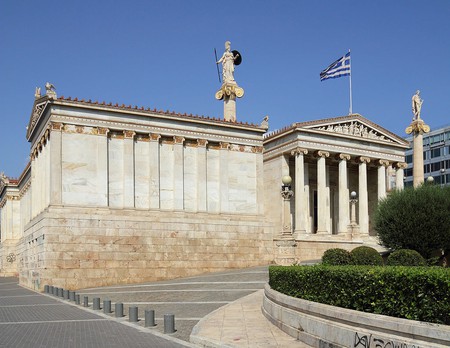 Building of the Academy of Athens | © A.Savin /WikiCommons

Founded by Ioannis Kapodistrias, the National Library building is the second building of the Athenian Trilogy. Constructed in 1887 by Theophil Hansen, the building was completed 15 years later after he had passed away. Designed as a Doric temple, the library is built entirely in marble and includes two side wings. While completely devoid of ornaments, the building includes two beautiful marble staircases leading to the entrance. The library’s collection is now being relocated to the Stavros Niarchos Foundation’s new centre in Kallithea, but the library remains a fascinating architectural gem worth admiring. 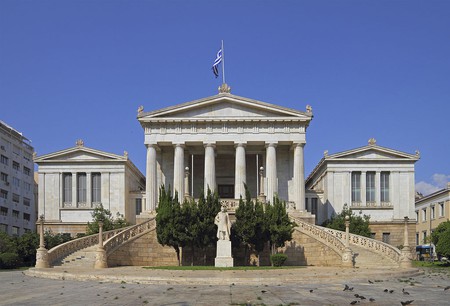 Building of the National Library of Greece in Athens | © A.Savin /WikiCommons

The original University of Athens building is the third structure in the Athens Trilogy. The H-shaped building was designed by Hans Christian Hansen, Theophil’s older brother, and the propylaea (front wing) was inaugurated in 1841 while subsequent wings were only completed in 1864. 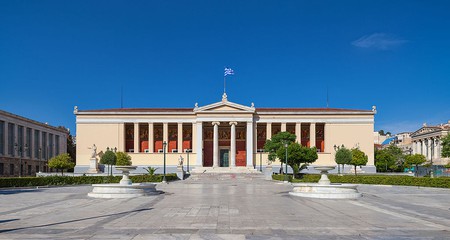 Also located on Panepistimiou, now home to the Numismatic Museum, the Iliou Melathron Mansion (Palace of Troy) was built in 1878–1879 and designed by Theophil Hansen’s assistant, German architect Ernst Ziller. The three-story mansion was the residence of German archaeologist Heinrich Schliemann, credited for the discovery of the ancient city of Troy, and includes a few Italian Renaissance elements but still maintains a strong neoclassical style. 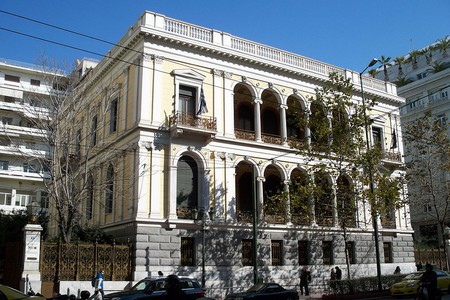 The Numismatic Museum of Athens | © Dimboukas/WikiCommons

Next to the National Gardens and close to the Panathenaic Stadium, the Zappeion is a hybrid venue built in 1874 by Theophil Hansen and financed by Evangelis Zappas. The first building in the world to serve Olympic needs, the Zappeion includes a Corinthian portico and boasts two symmetrical wings connected by a central atrium, and the building now accommodates a plethora of events, including Athens Fashion Week or awards ceremonies for Greek Olympian winners.

The Parliament house, located in Syntagma Square, was the former royal home to King Otto and Queen Amalia, the first rulers of the newly established Greek state, until the monarchy was abolished in 1924. The three-story palace, designed by German architect Friedrich von Gartner, was built from 1836 to 1842 and then restored after a 1909 fire partially destroyed it. The building was used for several purposes throughout the year, including as a shelter for Greek refugees from Asia Minor in 1922, until it was chosen to house the Parliament in 1929. 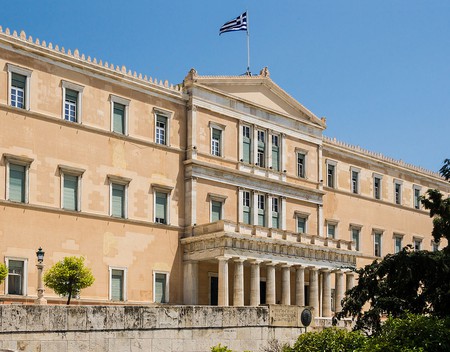 Detail of the main facade of the building of the Hellenic Parliament, Athens, Greece | © Jebulon/WikiCommons

The Gennadius Library, situated on the American School of Classical Studies in Kolonaki, was built in 1923 by American architect Stuart Thompson and is one rare example of late neoclassical style. Housing more than 120,000 volumes, the privately owned library focuses on Mediterranean history and Greek culture, includes an impressive online collection and organizes many events throughout the year. Note that a card be required to consult the library, and there are several strict rules to respect, but it’s great for professional academics or curious minds interested in Greece history and culture. 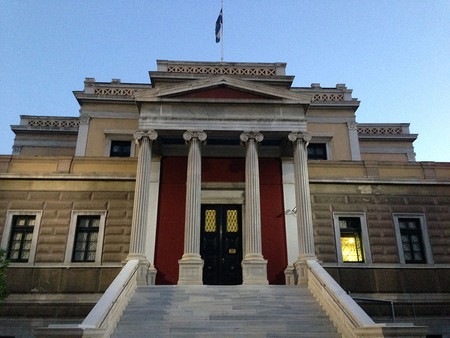