A Solo Traveller’s Guide to Athens 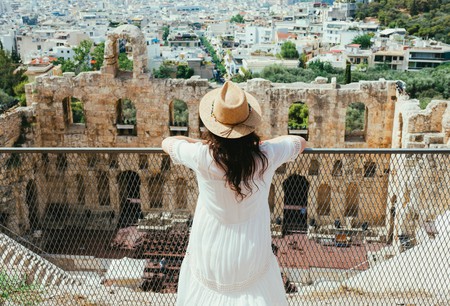 From hiking through forests opening up to whitewashed views to taking a selfie atop the Acropolis or tucking into some hearty souvlaki, Athens has plenty to offer the discerning solo traveller. There’s really nothing you can’t do alone here – and if company is what you’re after, locals are always up for a natter.

If you look beyond the mundane concrete and the – at times irritating – unruliness of Athens, you’ll find the Greek capital brims with beautiful corners, stylish bars and restaurants, and a very lively art scene – all of which go hand in hand with its gregarious people. It’s a night owl, too, staying awake until the early hours, offering plenty of exciting things to do. Just keep an open mind, and if you get lost, follow the glow of the Parthenon on the hilltop. 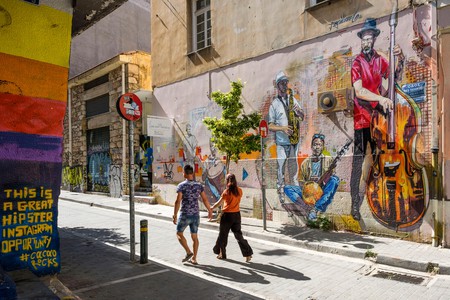 To cover the basics and get a deeper sense of the city, you’ll need five to six days. Climbing the Acropolis hill is obviously a must, but there are also many other archaeological sites to explore. If millennia-old treasures are what you’re after, stroll around the Monastiraki and Acropolis areas to spot some of the most notable examples, including the Roman Agora. 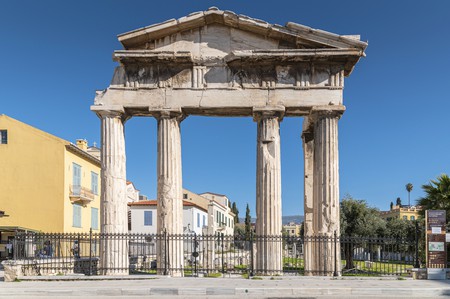 To escape the crowds, hike through the lush Ymittos mountain range and watch the city from up high. And for a full taste of the Athens food-and-drink scene, jump on a food tour of the centre before hitting the hip bars and tavernas in the Pagrati area. Alternatively, glam it up for a night out by the sea, along the Athenian Riviera. 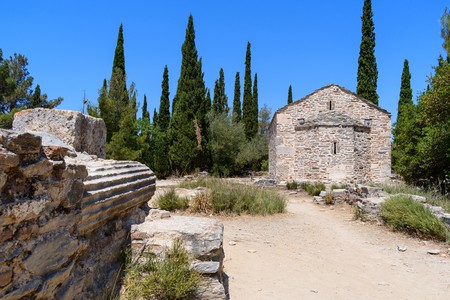 Where to stay in Athens

The peculiar – to some unattractive – thing about Athens is that it has no defined character. Yet that’s what makes the city so diverse and easy to fit all travellers’ tastes. If you stay in the centre, you’ll be marvelling at splendid neoclassical mansions that casually stand next to precious archaeological finds and semi-derelict blocks from the ’80s that look like they really don’t belong. Heading north, you’ll emerge in polished, verdant neighbourhoods dotted with plush hotels and houses, while in the southern coastal areas, sleek apartments and holiday rentals await you, matching the resort city vibes.

As one of the more central areas in Athens, Panepistimio is close to all the action. The main square, Syntagma, and main shopping street in the capital, Ermou, lie a few feet away, as does the affluent Kolonaki neighbourhood, home to high-end shops and posh cafes. Walk to Aiolou Street or Agia Irini square for great food and plenty of buzz. The area also has a number of cool boutique hotels. 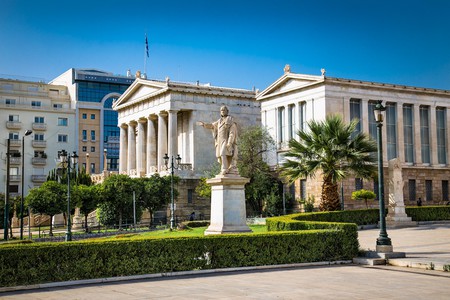 To delve deeper into the historical centre of Athens, stay in one of the charming hotels in Plaka. The oldest area in the city is known for having cute cafes, bougainvillaea-dotted alleys and Cycladic-style houses in Anafiotika – this lovely quarter within Plaka was created by settlers who came from the island of Anafi in the late 19th century. The Acropolis is minutes away, as is the vibrant Monastiraki Flea Market. 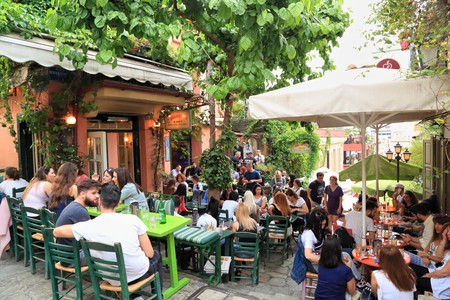 For those seeking fun places to eat, drink and socialise, staying in Pagrati will do the trick. Think hipster cafes with delicious brunch offerings, little mezedopolia – spots serving drinks and local nibbles – and fashionable lofts you can call home for the holidays. Art enthusiasts will also love the Basil and Elise Goulandris Foundation and the National Gallery Alexandros Soutsos Museum, which reopened in 2021 after an eight-year renovation. 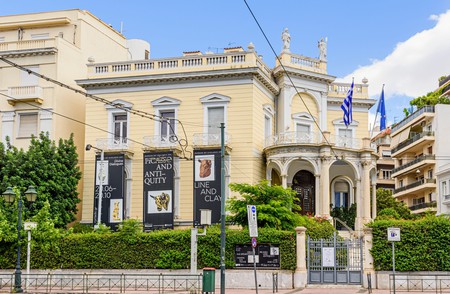 What to do in Athens

Discovering the best things to do in Athens is no easy feat, given each neighbourhood has its secrets and very own archaeological treasures. Check out our picks for some of the highlights, many of which you can also try on this small-group organised trip by Culture Trip.

Take a food tour around the centre

The best way to really get a taste of Athens is to take a walking food tour around the city centre. There are many organised tours that will lead you to the best places in town. From eating loukoumades (Greek doughnuts) on Aiolou Street to sipping some Lebanese soup near Psyrri, Athens will not disappoint when it comes to street-food delicacies. Make sure to try them all. 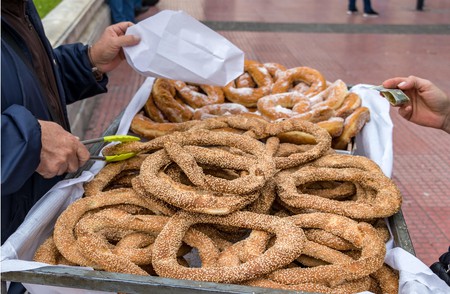 This attraction is an obvious one, but you can’t visit Athens and not see the Parthenon. The ancient temple was built on the Acropolis hill (acropolis meaning “edge of the city”) in the fifth century BCE, and it is still largely preserved today. Walk amid its striking marble columns before exploring neighbouring jewels such as the Erechtheion temple or the newer Herodeion, a stone Roman theatre that now holds live concerts. 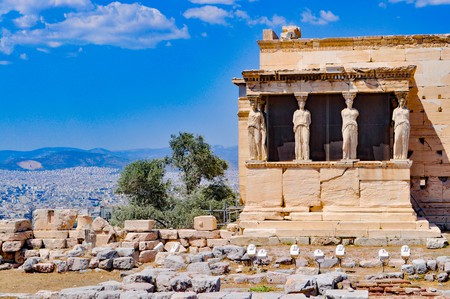 Bask in art and culture

Athens has become quite the art hub thanks to its thriving street-art scene. Walk around the Keramikos and Psyrri areas for large-scale murals or the anarchist area of Exarcheia for a more political, raw approach to street art. Apart from the Goulandris museum and the National Gallery, the Stavros Niarchos Foundation Cultural Center hosts cultural events and exhibitions – and sits in a magnificent park. 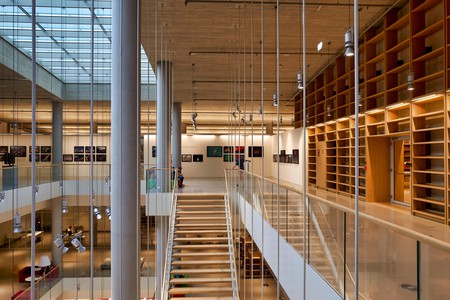 Eating and drinking in Athens

We’ve already said so much about the food, but it’s never enough when Athens is involved. The city is so full of cafes and eateries that there’s hardly any space left for anything else. Still, new places keep popping up, mainly in the centre but also in more residential northern areas, such as Chalandri and Cholargos. 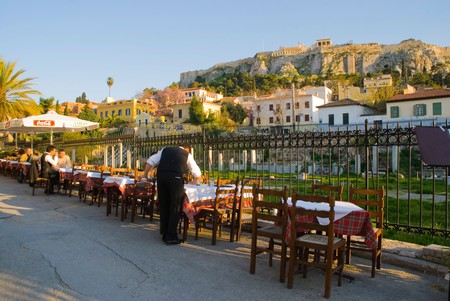 No matter where you are in Athens, you’ll find a place offering tasty cuisine | © Peter Forsberg / Europe / Alamy Stock Photo

Expect to find a good souvlaki place practically everywhere, along with tavernas serving traditional meals – anything from Greek salads and fine cheeses to juicy meatballs or a full-blown moussaka (the Greek eggplant-and-meat-based dish). The burger scene is also booming, with places such as Juicy Grill leading the way, and there’s a variety of good international food, too. Most cafes turn into bars at night, making for an ever-buzzing nightlife, especially in the centre. 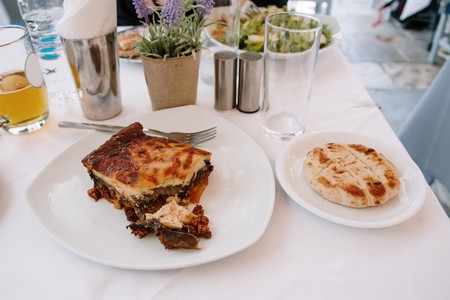 Athens has a variety of cuisine, including traditional Greek options, such as moussaka | © MarioGuti / Getty Images

Athens is a fairly safe city, but it helps to be extra careful at night – as you would in any capital. Stick to crowded areas. Also, always keep your handbag or backpack close when walking along busy streets, such as Ermou, or riding the metro, as pick-pocketing isn’t uncommon. 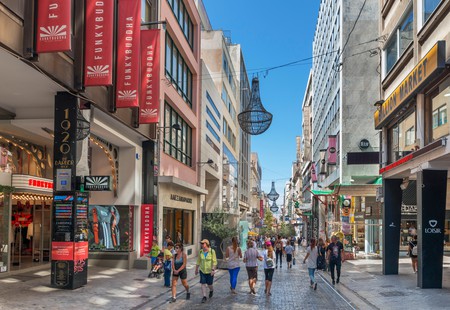 Most distances are relatively short in Athens, so you won’t have to spend a lot on transport. The centre is walkable no matter where you choose to stay, but if you want to head to more out-of-town suburbs, such as Kifissia and Glyfada, a taxi would be the best way to go. In Athens, taxis are safe, quite affordable and easy to find. It’s also worth downloading the Beat app – the Uber equivalent for Athens. 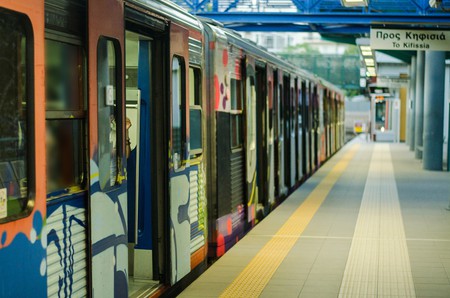 The metro system is easy to navigate but doesn’t reach all areas, so using it depends on where you want to go. Buses should be your last resort as they are not that frequent and usually very crowded.

Solo travel doesn’t have to be a lonely affair. Join a Local Insider and other culturally curious travellers on Culture Trip’s eight-day Greece adventure – taking you from the ancient ruins of Athens to the sun-kissed Cyclades.