A History of Athens in 11 Buildings 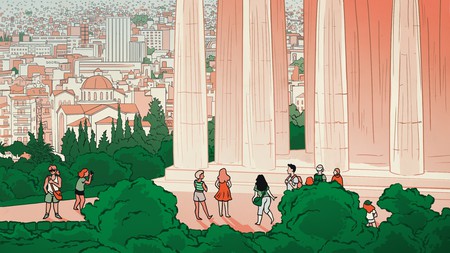 Get a sense of the Greek capital’s past through its rich architectural heritage. From the ancient Arch of Hadrian to the modern-classical fusion of the city’s Hilton Hotel, these buildings bring the history of Athens to life.

Though many visitors’ minds undoubtedly jump straight to the Parthenon when thinking about Athens architecture, the Greek capital has an oft-overlooked architectural diversity. Heritage expert Eva Markatou unpacks the history of Athens through 11 buildings, encompassing the ancient world, Neoclassical architecture and contemporary design. 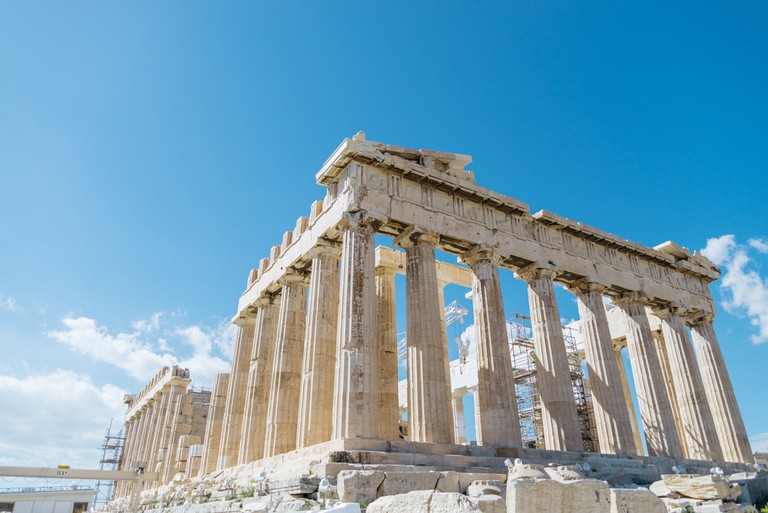 © Thomas Gravanis / Culture Trip
Book Now
The inescapable emblem of Athens, the Parthenon rises majestically above the city from Acropolis Hill. Built from 447-432 BC and designed by architects Iktinos and Kallikrates, the structure is dedicated to the goddess Athena – guardian of the city of Athens – and features sculptural adornments by master sculptor Phidias. The Parthenon has served many purposes since its initial construction as a temple to Athena, including a church dedicated to the Virgin Mary and a mosque under the Ottoman occupation. To see the Parthenon up close, hike up from the Plaka and Monastiraki side of the Acropolis Hill, taking in picturesque woodlands and offering a stunning view of the city.
Open In Google Maps
Athens, 105 58, Greece
+302103214172
Visit Website
Give us feedback 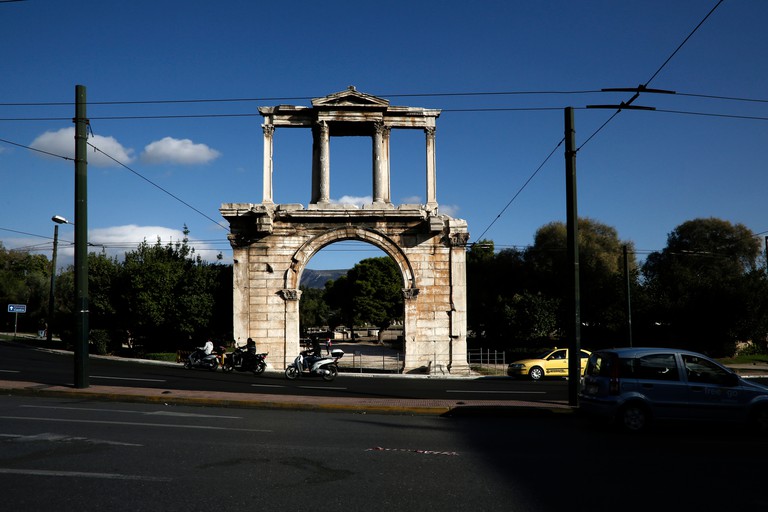 Set on bustling Vasilissis Amalias Avenue, the Arch of Hadrian is a triumphal arch built to honour Roman Emperor Hadrian (AD 117–138) and his projects that transformed the city, such as the Hadrianic aqueduct and the Library of Hadrian. According to the inscriptions on the arch, the gate marked the border between the old Athens of Theseus, the mythical king and founder of the city, and the new city of Hadrian. Today, many visitors pass the arch on the way to the Temple of Olympian Zeus, the same route Hadrian took upon the temple’s inauguration.

At Adrianou 96, a large sign welcomes visitors to the oldest house in Athens; behind the imposing wall hides an architectural gem. This is Benizelos Mansion, a rare example of Ottoman-era architecture in Athens. Although the building predominantly dates to the first half of the 18th century, on the site there are also remains of a home from the 15th and 16th centuries. The mansion belonged to the prominent Benizelos family and is the last surviving example in Athens of a konaki – a walled compound typical of the 18th century. Following a restoration project, the Benizelos Mansion has become a museum, meaning visitors can admire both the exterior and interior: look out for rare architectural elements such as the wooden hayiati, an open space on the first floor that is supported by wooden pillars, and a wine and olive press in the rear courtyard. 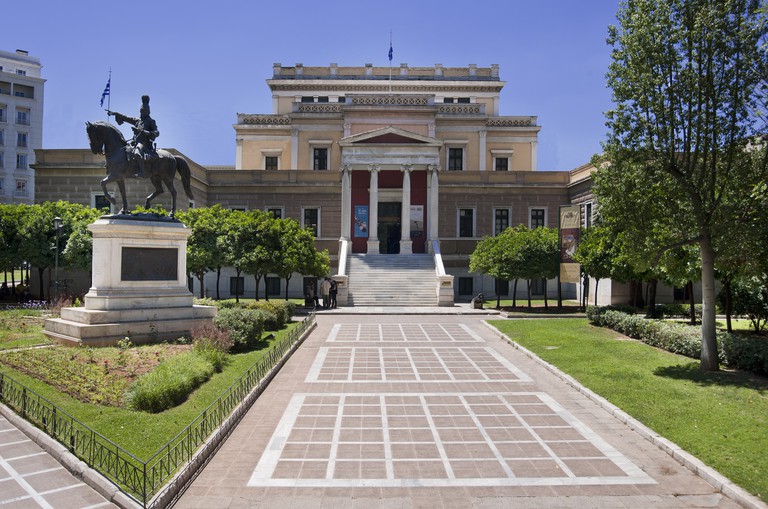 This Neoclassical building has a strong connection to the recent history of Greece. In 1858, the first Queen of Greece, Queen Amalia, asked the Architect François Boulanger to design this building to house the Greek Parliament. After some political and architectural changes – along with funding delays – the building took on this function in 1875 and remained home to the Parliament until 1935. Today, the building houses the National Historical Museum, where visitors can engage with the history of modern Greece. Your history lesson, though, can begin before even entering the building: on Kolokotroni Square, in front of the building, you will find the equestrian statue of Theodoros Kolokotronis, a hero of the 1821 Greek War of Independence. 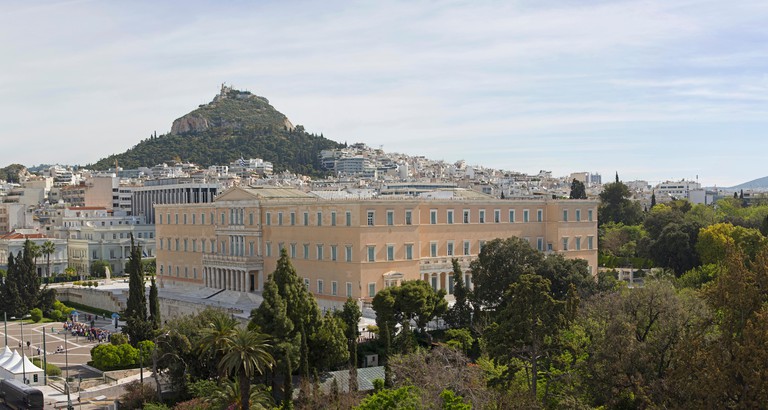 The Hellenic Parliament is built in Neoclassical style | © Marko Beric / Alamy Stock Photo
Before it became the Hellenic Parliament in 1929, this Neoclassical building next to Syntagma Square was the Royal Palace, where Otto, the first King of Greece, and his wife Amalia, lived from 1843 to 1862. This is one of the most photographed buildings in Athens, not only because of its Neoclassical design but also in large part by virtue of the Evzones, the members of the Presidential Guard who stand in front of the Parliament. Pro tip: walk by the Parliament on the hour to see the changing of the Presidential Guard.
Open In Google Maps
Athens, 105 57, Greece
+302103707000
Visit Website
Give us feedback 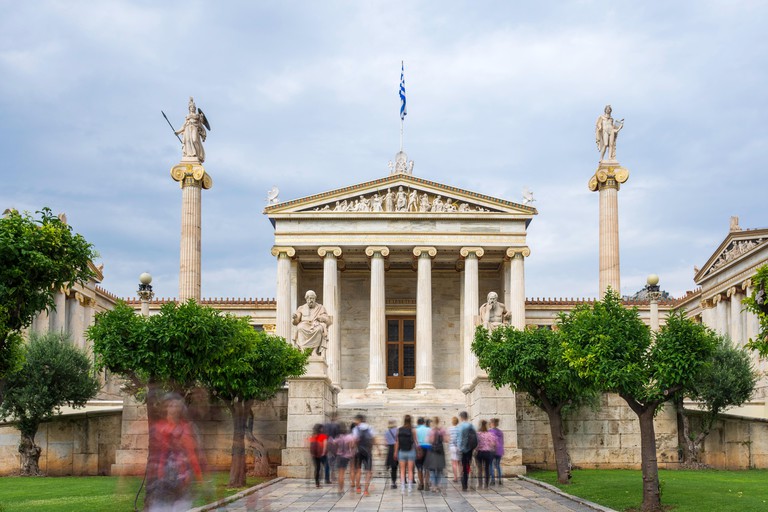 Along Panepistimiou Street, three buildings grab your attention. These make up the so-called ‘Athens Trilogy’, which consists of the Academy, the University and the National Library. Designed by the Danish architect Theophil Hansen, the Neoclassical Academy of Athens was built in 1885 and takes inspiration from the monumental gateway to the Acropolis. When visiting, take note not only of the structural architecture – featuring Ionic-style pillars – but also the sculptural adornments. The pediment above the entrance and the statues of Athena and Apollo are the work of Greek sculptor Leonidas Drosis. Today, the Academy serves as the highest research establishment in Greece.

Book Now
The story of the Panathenaic Stadium starts in 330 BC, when it was built to host the Panathenaic Games, which included sports competitions and musical events. Unfortunately, nothing is left of the building from this period. The stadium was rebuilt in the 2nd century, but was abandoned and fell into disrepair after Roman Emperor Theodosius I banned Hellenistic festivals in the late 4th century. Architecturally very similar to the Panathenaic Stadium as it was in AD 2, the marble stadium that visitors can admire at Vasileos Konstantinou Avenue today was built in 1896 to host the first modern Olympic Games and is the only stadium in the world built solely of marble. If you are in Athens in November, don’t miss the Authentic Athens Marathon – the Panathenaic Stadium is the finishing line.
Open In Google Maps
Leoforos Vasileos Konstantinou, Athina, 116 35, Greece
+302107522984
Visit Website
Give us feedback

In the decades following World War II and the Civil War (1946–1949), Athens attempted to find its architectural identity via a gamut of ambitious construction programmes designed to bring the city into a new era. One such project was the US embassy building on Vasilissis Sofias Avenue, built in 1961 and designed by German Architect Walter Gropius. This perfectly square building features architectural characteristics inspired by ancient Greek architecture, such as a peristyle – a porch formed by a row of columns. The building’s white marble comes from Mount Pentelicus, the same marble used to construct much of the Acropolis.

The Hilton Hotel is well known as one of the most luxurious hotels in Athens. The imposing structure, however, conceals a unique architectural history. When it was built in 1963, it was the tallest building in Athens and divided opinion among Athenians – some believed that it overshadowed the Acropolis, while others admired its combination of traditional and modern elements. The otherwise modern building is notable, for example, for its use of columns, white marble and sculpted facade by Greek artist Yiannis Moralis. Get a fresh perspective on the hotel by heading to the rooftop Galaxy Restaurant and Bar.

Situated on Mesogeion Avenue, and standing at 103 metres (338 feet) and 28 storeys tall, Athens Tower 1 is the tallest building in Greece. Indeed, the tower certainly stands out among its mainly low-rise peers. This is partly due to strict regulations that limit the maximum height of buildings – today, the limit stands at 32m (105ft). Athens Tower 1 was built in 1971, when the country was under a military junta and the existing height restriction ceased to apply. Designed by two Greek architects, Ioannis Vikelas and Ioannis Kimpritis, Athens Tower 1 now stands as one of the city’s major landmarks, together with its smaller neighbour Athens Tower 2.

Book Now
At the foot of Acropolis Hill, on Dionysiou Areopagitou Street, a modern building stands in contrast to the surrounding ancient sites. This is the Acropolis Museum, which opened its doors to the public in 2009 and was designed by Swiss architect Bernard Tschumi. Over its 14,000 square metres (150,700 square feet) of exhibition space, the museum hosts 4,000 artefacts from Acropolis Hill and its surroundings. The exhibitions are spread across three levels and allow visitors to walk among freestanding statues and over subterranean artefacts, set under sheer glass floors. Large panels of glass allow light to flood into the museum and offer a direct view of Acropolis Hill, while the Parthenon Gallery on the top floor boasts 360-degree panoramic vistas. The building, though modern, takes many architectural cues from the Acropolis itself – the spacing of the columns of the Parthenon Hall, for example, echoes that of the ancient temple.
Open In Google Maps
15 Dionysiou Areopagitou, Athina, 117 42, Greece
+302109000900
Visit Website
Give us feedback