A Brief History Of The Zappeion, Athens

The Zappeion Exhibition Hall, or the Zappeion as the Athenians call it, has witnessed the history of Athens for the past 130 years. A major scene for some of the most significant moments in the country’s history, it has always been integrally linked to the Olympic Games. Even though its uses were varied – from the Olympic Games village and a hospital to a storehouse and even serving as barracks – it has become a landmark in the Greek capital, fulfilling the initial wishes of its benefactor, Evangelis Zappas.

The Man Behind The Building

The Zappeion is located in the heart of the National Gardens, but to understand its importance and raison d’être, we need to have a look at the man behind its construction. 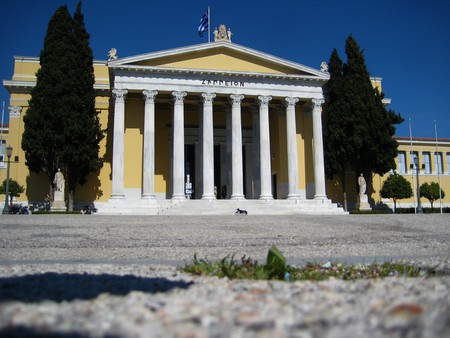 Evangelis Zappas, who participated in the Greek War of Independence (1821–1832), was a rich businessman living in Romania. Pushed by the ardent desire of reviving ancient traditions in the new Greek state, he resolved to revive the Olympic Games through his own resources. After much opposition, he finally managed to convince King Otto and provided the Greek government with enough funds to establish an Olympic Trust Fund. And so eventually, on November 15, 1859, the first Olympic Games was held in a city square in central Athens.

Zappas gave part of his fortune for the funding of the future Olympiads to be held at the Panathenaic Stadium, and even though he died in 1865, in 1870, the Stadium – after being refurbished – was used for the Games. These were the first modern international Games and were called the Zappeion Olympiads. Zappas had also left instructions for the construction of the first building to serve Olympic needs.

This building is none other than the Zappeion Conference and Exhibition Center, though Zappas didn’t live to see his wish fulfilled.

In 1869, the Greek Parliament donated more than 80,000 square meters of public land between the temple of Olympian Zeus and the National Gardens – which at the time were the Royal Palace gardens – as required by Zappas’ wish. He had, indeed, asked that the building be as close as possible to the Stadium.

And though the cornerstone was laid in 1874, the building, constructed by Danish architect Theophil von Hansen, was only inaugurated in October 1888, as construction was delayed and came to a halt twice. 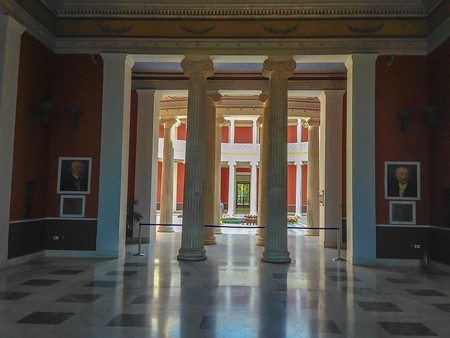 The Zappeion is arranged according to a symmetrical plan around a circular atrium. The atrium is bordered by two smaller wings, both containing adjacent quarter-circle halls concentric with the atrium. The front façade has a three-part layout with the main, two-story building with a Corinthian portico and two side wings. The layout of the interior is also fascinating, with the vestibule leading to the atrium, which has a two-level arcade with an Ionic colonnade on the ground floor and pillars with the heads of caryatids on the upper one. Walking through the building, one can only admire the fact that open and closed spaces brilliantly alternate.

During the Olympic Games of 1896, the fencing competition was hosted in its atrium; and during the 1906 Games, it was used as the ‘Olympic Village.’ 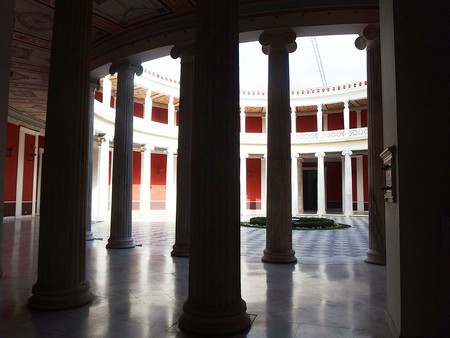 Later, from 1936 and for 40 years, it hosted Greece’s first state radio station. In 1940, it was converted into a hospital and then commandeered by the German occupation army to serve as a storehouse and then as barracks. It was even bombed in 1944.

In 1960, general repair works were carried out even though there were plans to destroy the building. It was also there that the documents formalizing Greece’s accession to the European Community were signed in 1979. During the 2004 Olympics, the Zappeion served as one of the press centers.

Today, the Zappeion is used as a Conference and Exhibition Center for public and private functions. If you can, try to catch a movie at its historical outdoor cinema or have a drink at the next-door bar, which also been around for decades now. 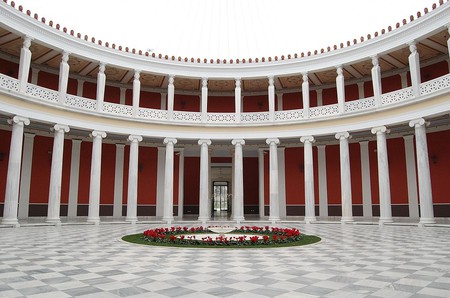 The Zappeion Hall atrium | © Badseed/WikiCommons
Give us feedback