A Brief History Of The Temple Of Poseidon, Sounion 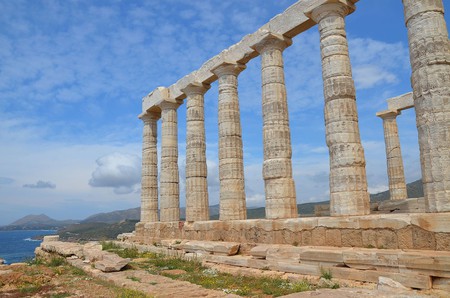 Majestic Cape Sounion, a strategic point rising above the Aegean sea about 70 kilometers away from Athens in the southern region of Attica, was known by Ancient Greeks as the “Sacred Cape.” On top of this 60 meter cliff stands one of the most important sanctuaries in the region: the temple dedicated to Poseidon, God of the Sea.

Built between 444 and 440 BC, the temple was constructed of marble from the valley of Agrilesa, about four kilometers north of the Sounio Cape. The architect is thought to be Ictinus (or Iktinos), who built the Temple of Hephaestus in the Ancient agora in Athens. He built the 16 columns at the Temple of Poseidon in a way that ensured they would stand the test of time and resist the harshness of the environment, and made the Doric columns more slender at the top so they would look taller. 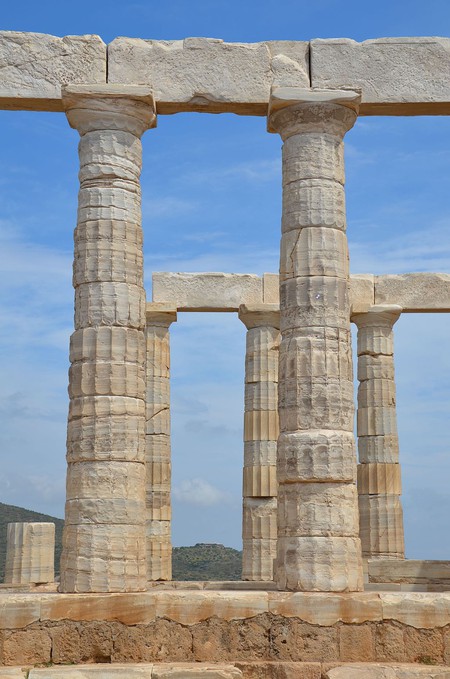 As with many other monuments and sanctuaries around Greece, historical facts about the Temple of Poseidon in Sounion are intertwined with bits of legend. For example, it is thought to be the spot where Athenian King Aegeus killed himself by jumping off the cliff. Aegeus, who had positioned himself at Sounion to look out for the return of his son Theseus from Crete, saw the black sails on the ship and mistakenly thought Theseus had been killed by the Minotaur, a creature with the head of a bull and the body of a man. In fact, young Theseus was victorious but had forgotten to replace the black sails on his ship with white ones upon returning, which ultimately led to his father’s death. And so, in commemoration, Aegeus’ name was given to the Aegean Sea.

And in the Odyssey, Homer wrote that Sounion was the place where King Menelaus of Sparta buried his helmsman, who died at his post while rounding the cape. 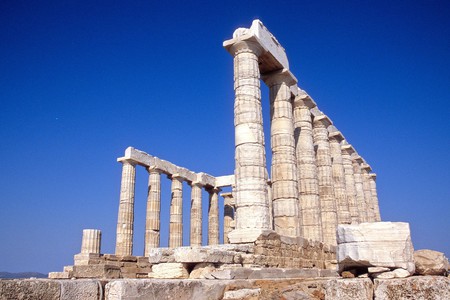 In Greek mythology, Poseidon, brother of Zeus, was the God of the Sea, so it is no wonder that he was highly revered and worshipped in a country with over 13,500 kilometers of coastline. Ancient Greeks, especially seamen, believed storms were signs of Poseidon’s wrath, and therefore the temple at Cape Sounion was a sacred place where sailors and the general population came to offer animal sacrifices and other gifts to appease him and find favor.

The temple was built according to a hexastyle plan, with a front portico with six Doric columns. It was rectangular, with a colonnade on all four sides, and had a frieze depicting the tale of Theseus and the Battle of Centaurs. The 16 columns, 15 of which are still standing today, are fewer in number compared with other temples dating from the same period, a feature common among other ancient temples built near the sea such as the Temple of Aphaia in Aegina.

The remnants of the temple’s marble sculptures are now displayed at the National Archaeological Museum of Athens and the Mineralogical Museum of Lavrio, with one column on display at the British Museum in England. British Romantic poet Lord Byron carved his name at the base of one of the remaining columns during a visit in 1810 when he was touring Europe before rising to fame. 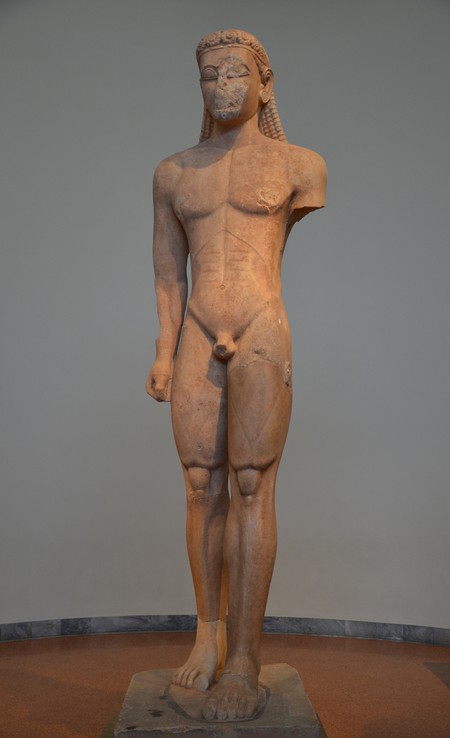 Statue of a Kouros, from the Sanctuary of Poseidon at Sounion, ca. 600 BC, National Archaeological Museum of Athens | © Carole Roddato/Flickr

Today, a morning visit to the temple is an excellent day trip option that allows visitors to enjoy lunch at the nearby tavernas and a swim in the afternoon. And though little remains, don’t forget to visit the Sanctuary of Athena Sounias on the opposite hill.

Alternatively, you should know that the views of the sunset from the temple’s ruins are considered one of the best sights in all of Greece.