A Brief History Of The Panathenaic Stadium, Athens

The Panathenaic Stadium in Athens, where the first modern Olympic Games were held in 1896 |© Christos Doudoulakis/WikiCommons

Made of marble from the nearby Mount Pendeli, the marble stadium – the only one of its kind in the world – is another landmark in downtown Athens. Also known as the Panathenaic Stadium or the Kallimarmaro (meaning ‘made of beautiful marble’), it is located at the bottom of the residential neighborhood of Mets, with the National Gardens on the other side. Nowadays, this multi-purpose venue is used for sports and also for the handover ceremony of the Olympic flame every four years. Learn more about this age-old vestige of Ancient Greece.

The ancient stadium where the Kallimarmaro now stands was the place where nude male athletes were competing in athletic events during the Panathenaia celebrations, the greatest festivities in ancient Athens. It was built around 330 BC by Athenian orator Lykourgos. The stadium had a parallelogram shape with an entrance on one end and spectator seats on the three sides of the stadium. 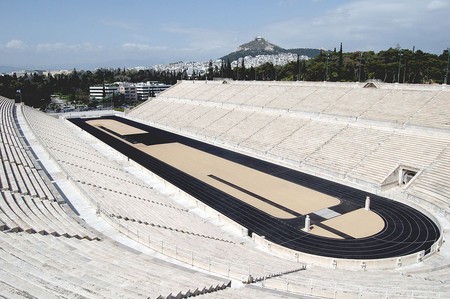 Later during the Roman times, Herodes Atticus made a contribution to renovate the stadium with some restructuring works carried out, such as the shifting of the shape into a horseshoe and the addition of a propylon at the entrance. After the prevailing of Christianity, the stadium was largely abandoned. It was later excavated in the 19th century with the push of the revival of the tradition of the Olympic Games by Evangelis Zappas, Greece’s most notorious benefactor and whose name was given to the Zappeion. At that time, he had already petitioned to revive the century-old tradition, and in 1870 and 1875, the Zappeion Olympiads were held.

After its renovation, mainly sponsored by Greek businessman George Averoff, it was there that the first modern Olympic Games were held, with resounding success.

Today, the stadium is used for many purposes and even holds a record. As the home for the AEK Basketball Club during the 1960s, the team defeated Slavia Prague at the 1967–68 FIBA European Cup Winner’s Cup final in front of around 80,000 seated spectators inside the arena, apparently the largest crowd to ever attend a basketball game. 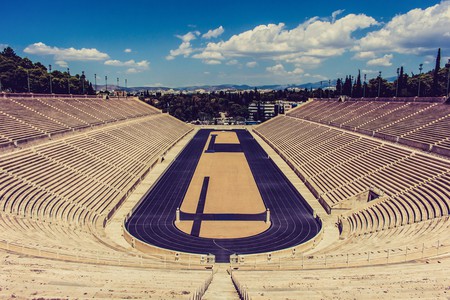 The Panathenaic Stadium | © RzlBrz007700/PixaBay
Give us feedback