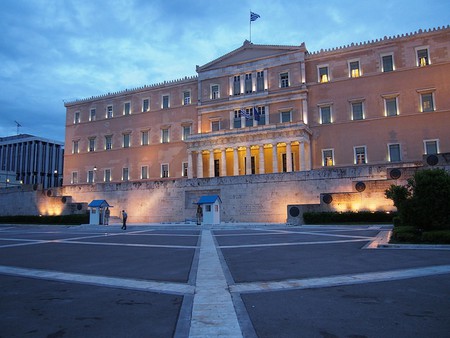 A major point of commercial, political and social life, Syntagma Square is the most important square of the city, and even the country. Its central fountain and statues with the Parliament building in the background, make it an easily recognizable sight, topped only of course by the Acropolis.

Bordered by five-star hotels and shops and the Parliament house, Syntagma Square has a long history.

Designed and constructed in the early 19th century, after Greece’s first King Otto moved the capital of the newly-born Greek Kingdom from Nafplio to Athens in 1834, the Palace square, as it was known, was one of the city’s two main squares along with Omonoia (meaning Concorde).

However, in 1843, due to a popular and military uprising, King Otto was forced to grant a constitution to the people and so the square was renamed Syntagma Square, meaning Constitution Square. It was Queen Amalia who commanded the construction of the fountain, as well as the creation of the National Garden, which is located directly right of the Parliament building.

When the country’s military junta collapsed in 1974, it was yet again in Syntagma that the new leader of Greece gave his first speech. The square was also the center of action for and the main space occupied by the indignados of Athens – the Aganaktismenoi – during the anti-austerity movement of 2010-2012.

Today, Syntagma Square continues to be the stage for demonstrations and political rallies and serves not only as a destination for travelers and tourists, but also a meeting point for locals. 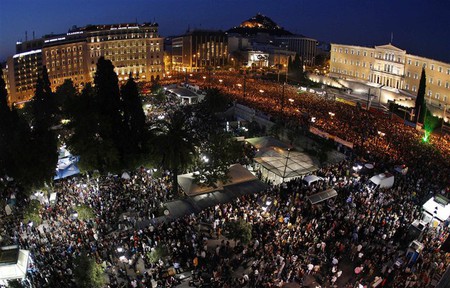 Syntagma houses the Parliament building, which was built around 1842 as the residence for King Otto and Queen Amalia and which has been the Parliament quarter since 1934. At the bottom of the Parliament stands the Monument of the Unknown Soldier, guarded by the evzones, members of the presidential guard. Dressed in a kilt-like piece of garment called the fustanella and wearing traditional shoes ornamented with pompoms called tsarouchia, evzones are selected for their height and strength. Every 15 minutes, the two evzones standing guard switch position by way of an intriguing choreography. The changing of the guard, done every hour, is a slow yet fascinating procession that usually attracts many tourists. Just be warned: you are not allowed to touch them and if you speak to them, they are not allowed to react or respond. 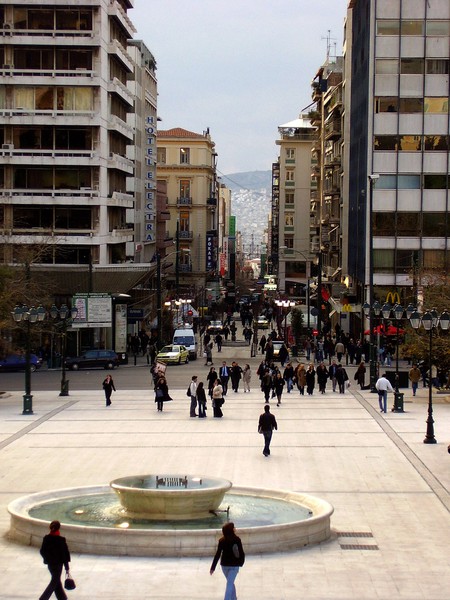 As the epicenter of the city, Syntagma is close to many attractions, such as the National Garden, the Arch of Hadrian, Plaka, the Acropolis, the Temple of Olympian Zeus, the Panathenaic Stadium – the marble stadium built in the 6th century BC – and the charming neighborhood of Plaka. It is also the starting point of Ermou street, a pedestrian High Street connecting Syntagma to Monastiraki square.

Syntagma is also a hub for transportation and is a major junction point for Metro lines 2 and 3, with the station located underneath the square. It also features an on-site archeological display! The tram, connecting the center to the southern suburbs and the seaside, also makes a stop here.